Hey everyone! Brian Otten from X Plus in Osaka, Japan here. We are thrilled to be releasing Smelter, a 16-bit style action-strategy hybrid, available today on Xbox One and Xbox Series X|S!

So, what’s Smelter all about?

Smelter is our debut title since coming together as a team in 2018 and it is our take on a combination we haven’t seen much in recent years: a top-down strategy, action-platformer in a 16-bit style.

In overhead, Mode 7-style map stages, players control airborne Smelter, who can fly, shoot and destroy enemies and obstacles while giving commands to his troops to expand territory, build structures and unleash attack units against enemy monsters in various regions. Players control Smelter in a top-down strategic conquest as he and his Zirm forces attempt to expand his empire by completing quests and taking on an onslaught of enemies determined to stop him. Gameplay is designed with shooting and command-driven interfaces, adding modern-day tutorials to assist both veteran gamers and those new to the genre.

Once the player has completed certain NPC-driven quests and fortified key locations on the map, they will access new and exciting action-platformer stages where they control Eve infused with Smelter on foot and take on the bad guys. Eve can perform an array of melee attacks, jumps, dashes, wall grabs, Smelter special attacks and maneuvers to complete the stages and progress the story. Stages contain secret “Trial” stages where the players are rewarded by completing short levels within given conditions, such as Time Trial, Don’t Get Hit, Don’t Be Seen and more.

When planning Smelter, while although we made it a priority to give our own spin on the top-down strategy and action-platformer genres, we were definitely inspired by classics like Actraiser and the Megaman series simply because those were the games many of us loved to play and still love to play.

And while that might explain some of the inspirations for the game design choices, we feel Smelter has ultimately become this combination of the team’s personalities and what each of us enjoy to read, listen to, play and watch — anything that we are personally inspired by whether it’s a sarcastic comedy, action-packed anime with characters wearing armor that has no business being worn in battle, memorable boss from a game we played years ago, or a super heavy metal soundtrack we bang our heads to while working.

The Journey into the Rumbly Land

The majority of us at X Plus were (and still are) foreigners living in Osaka, Japan. The game development community in Japan can tend to be a fairly connected one, especially amongst expats, which makes it a great place to find those with similar goals. We were all looking for something new and eventually found ourselves together at X Plus in Japan, which has a long history with collectible figurines, and they were willing to give us a chance to pursue something we wanted to do.

We went back to the whiteboard and asked ourselves: “What do we think makes a game fun?”

The result we reached is the Smelter players experience now: an action-packed platformer and strategy game with three distinct elements and an easy-to-learn swappable skill set system, a simple yet compelling narrative, colorful and high-quality pixel art, fun strategy mechanics and more emphasis put on thematic stage mechanics that mesh well with the skills available to the player.

Last but not least, a great soundtrack and sound design done by some incredibly dedicated and passionate artists that helped breathe life into the visuals and game mechanics.

We were super happy to be able to come together and go through this journey of making Smelter what it is today. For over two years, the team lived and breathed Smelter (even had dreams!). We’ve all put a piece of ourselves into Smelter and we are hoping to have the chance to share the story of Smelter with players around the world. 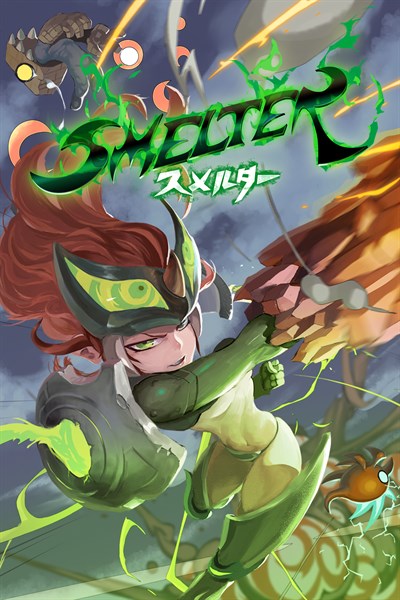 ☆☆☆☆☆ 17
★★★★★
$19.99
Get it now
You are Eve, fresh out of Eden and armed with a living suit of armor. Explore a dangerous new world, battle its bizarre denizens and expand your empire in a desperate journey to find Adam. Smelter is a strategy, action-platformer combo inspired by classics from the 16-bit era. Lead Smelter and his faithful Zirm forces by expanding Smelter’s territory across the Rumbly Lands in top-down strategy levels, then dive into thrilling side-scrolling action stages after annexing key locations. Build, attack and advance your army — unlock, upgrade and unleash elemental action skills against vicious enemies, perilous environments and dangerous bosses. Release the power of Smelter! STORY After the untimely destruction of the Garden, Eve finds herself in an unfamiliar world with her beloved Adam nowhere to be found. In her search for Adam, she encounters Smelter, an unusually over-confident, winged creature with the powerful ability to transform and fuse with others, giving them incredible powers. Offering his apparently “invaluable” assistance, Smelter transforms and fuses with Eve. They depart on a journey to the treacherous Rumbly Lands. There, they expand Smelter’s territory, allowing them to reach further into the various domains to find out what happened to her Adam, hoping to find him in one piece and find a way back home to their peaceful lives…