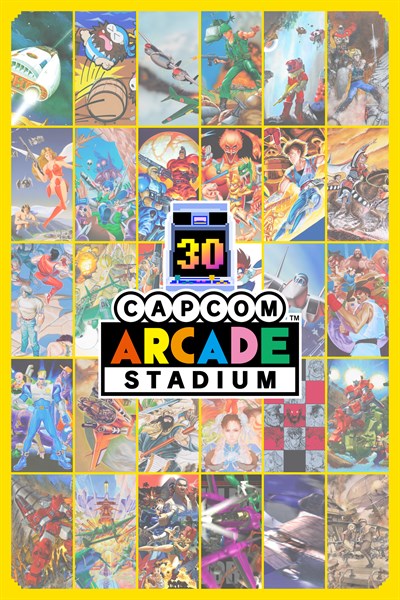 ☆☆☆☆☆ 239
★★★★★
Get it now
Purchase before [2021/6/7 23:59] get the bonuses detailed below! ■Pre-Order Bonuses / Early Purchase Bonus Capcom Arcade Stadium: Display Frames Set 1 A set of wallpapers for use in-game, modeled after the designs and artwork of the titles included in Capcom Arcade Stadium. Note: This bonus may be sold separately in the future. ■About Capcom Arcade Stadium Relive the Capcom classics! 1943 -The Battle of Midway- comes as a free download! Shooters, fighting, action—all your favorite genres in this exciting collection! Capcom Arcade Stadium brings back all the nostalgia of the arcade, while adding in new and exciting features you'll wish you had back then! Just Like the Good Old Days From 3D-rendered arcade cabinets to scanline filters, there's everything you need to recreate that arcade atmosphere. Fully customizable display settings let you craft your own personal experience and truly relive the glory days of arcade gaming. Brand New Ways to Play With gameplay rewind, speed adjustment, and the ability to save and load your game at any time, your old favorites will feel new all over again! Every game has online leaderboard rankings, so you can see where you stack up against players all over the world! Capcom Arcade Stadium, where retro appeal meets cutting-edge features for a fresh take on Capcom's classics! ■Bundle Contents Get a great deal on 30 additional Capcom Arcade Stadium titles with the Capcom Arcade Stadium Packs 1, 2, and 3 bundle. As a special bonus, you'll also get Capcom Arcade Stadium：Ghosts 'n Goblins! Note: - Player numbers differ based on the game. Multiplayer gameplay is available on local connections only. - As a special bonus, you'll get Capcom Arcade Stadium：Ghosts 'n Goblins. Supported Languages: English, French, Italian, German, Spanish, Japanese, Korean, Traditional Chinese, Simplified Chinese, Russian, Brazilian Portuguese, Thai, Hindi
NOTE: You may pre-download this game, but it will not be playable until the release date/time: 05/24/2021 – 5:00 PM (check the product page for release date/time in your region).
Product Info:
Developer: CAPCOM
Publisher: CAPCOM
Website: Capcom Arcade Stadium
Twitter: @CapcomUSA_