Curved Space is a nod to classic twin-stick arcade shooters that amps up the blasting experience with an epic synthwave soundtrack by FiXT Neon that fuels your mission set in the farthest reaches of space. You’ll take on giant alien tripod spiders and humongous boss monsters across curved galactic landscapes while hunting for power-ups and upgrades, avoiding enemy onslaught, and annihilating interdimensional bugs. Simple to learn as you fight your way through the branching story-driven campaign, but tough to master as you chase high scores in survival mode.

We sat down with Andrew Czarnietzki and Jen Laface of Only By Midnight, the husband-and-wife developer team behind Curved Space, to talk about how space and the unique soundtrack have helped shape and guide the development of the game.

Maximum Games: What inspired you to set this reimagined take on classic arcade shooters amidst the furthest dimensions of space, and what were some of your inspirations for the landscapes?

Only By Midnight: We love space and science fiction! There is something iconic about seeing the limb of a planet, and we really wanted to capture that feeling.

Our first levels started turning into somewhat abstract space stations. While we liked where this was going, there was a problem: to withstand all the explosions and combat on their surface, the stations were feeling too dense and solid. Real life satellites and the I.S.S. (International Space Station) feel a lot more delicate.

Gerry [Ricard, contributing 3D artist] who was assisting with environment art, said, “It doesn’t feel like a space station; it feels like it’s made of concrete.” This immediately became canon; the stations are carved out of and or 3D-printed from asteroid concrete. This is also the inspiration for the level “Plug”, where we show an asteroid in the process of being carved up.

Maximum Games: Can you explain how you used the space theme to influence the campaign?

Only By Midnight: The Campaign is all about small islands of stability in the void of outer space—with the added complexity of some inter-dimensional shenanigans. This ties to our concept of a 2D game intersecting 3D space. I, (Andrew) personally, love that space is flexible and malleable, and we tried to play this up in both our game mechanics and story.

Maximum Games: Did setting the game in space influence the type of music you wanted?

Only By Midnight: Synthwave and Cyberpunk are synonymous with sci-fi. There is also a rich history of bold colors, particularly the yellow and magenta contrast, which we knew we’d have to show as either a black hole or an eclipse. Our “synthwave sky” is 100% inspired by the music!

Maximum Games: What made you want galactic spiders to be the enemies?

Only By Midnight: First, we both love the idea of cosmic horror—so, this unseen “spider dimension” is our nod to Lovecraft, Warhammer 40k, the film “Event Horizon,” etc.

Second, we wanted compelling enemies that were interesting to shoot. Spiders, especially alien tripods, are pretty neat to watch run around—they’re so alien that they skitter right over the uncanny valley. I don’t think I could pull off a convincing humanoid animation, but I can sure add personality to a bunch of crystalline tripod spiders.

Lastly, we really wanted something that would be scary and seem to warrant cracking out the giant space flamethrower. Hordes of spider-monsters fit the bill perfectly.

Maximum Games: Can you talk about the gravity-defying mechanics of going over asteroids, planets, and all the types of space matter fields?

Only By Midnight: Environment design was a really neat challenge for Curved Space. If levels are too concave, then you are always going uphill and can’t see much. If levels are too convex, then you are always cresting a hill…and can’t see much.  There really needs to be a balance of ups and downs to truly feel those awesome gravity-defying moments.

We started by experimenting with lots of crazy shapes to find ones that made sense from a gameplay perspective.  Then, we worked to figure out what these shapes meant in our universe of energy harvesting. We came up with a whole series of technologies that relate to pulling in interdimensional energy, processing it, and directing it through space and portals.  This technology led to some interesting secondary concepts—like a giant planetary defense railgun or a rogue comet.

Maximum Games: Any behind the scenes or funny stories in the development of the game related to the space theme?

Only By Midnight: One of my favorite and most alien levels is Horn. When experimenting with shapes, I tried an old dragon skull that I had in my library. It worked eerily well—the twisty horns were so much fun with the gravity-warping gameplay. If you look closely, the final level is very much a giant dragon skull split in half, but with the interior turned into a sci-fi dish and some big glowing canisters at the eye-socket.

On the gameplay side, we needed some sort of obstacle that could block players and change the landscape.  I experimented with a few options and settled on big spheres, which later became our dimensional Rifts.  I tried to make something portal/wormhole/blackhole like but with a sinister edge.  My friend Ian said, “That looks really cool and also a bit like an eye…”—I couldn’t resist making them blink.

Another interesting behind-the-scenes story is when I accidentally made the sky rotate smoothly towards the player.  It felt very, very wrong to have the stars do that… but there was something creepy and cool about how the planet would always slide into the center of the view.  Like a giant eye.  This is where our “eyeball” vortex in the endgame came from.

Maximum Games: Why is the ship a grasshopper shape?

Only By Midnight: Well, it started as a disc shape—basically an air-hockey puck with laser cannons.

I rather liked the classic ship (and you can still unlock it in the game), but it wasn’t quite as exciting as the rest of the art.  We did some tests to see if we could really push the concept for this “hovercraft + starfighter”, and we settled on the grasshopper concept with forward wings and big repulsion rings.  As soon as I got the model in-game and flying around, it practically begged for motion—so, I experimented with making the rings and wings react to your movements on the surface.  This gave it a great feel, almost like it was skating and pushing off the surface. We didn’t set out to make a “grasshopper,” but as soon as the ship was called that we leaned into it.

Maximum Games: What is your best space pun or joke?

Only By Midnight: I have to go with some “Hitchhiker’s Guide to the Galaxy” by Douglas Adams:

“What do you mean you’ve never been to Alpha Centauri? Oh, for heaven’s sake, mankind, it’s only four light years away, you know. I’m sorry, but if you can’t be bothered to take an interest in local affairs, that’s your own lookout. Energize the demolition beams.”

If you are ready to explore the weirdest reaches of space, you can play a demo of Curved Space on Xbox One and Xbox Series X|S. Curved Space releases on June 18. 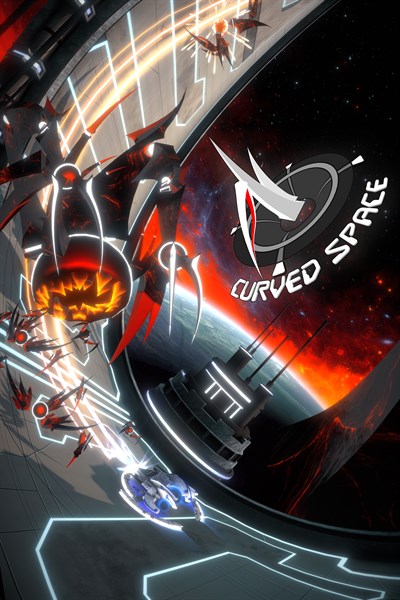 ☆☆☆☆☆ 11
★★★★★
Get it now
Inspired by arcade classics, players will have to hunt for weapon power-ups and upgrades while dodging enemy fire, blasting interdimensional bugs, and wrangling some enormous boss monsters. Simple to learn as you fight your way through the branching story-driven campaign, but tough to master as you chase the glory of the leaderboards. Key Features Old School Shmup Reimagined: Enjoy the high-energy action of traditional 2D shoot ‘em ups in a warped 3D space. Climb walls, flip over to the other side of your environment, and experience breathtaking vistas. Play Your Style & Top the Leaderboards: Experience your space pilot’s harrowing journey in Campaign, take on new challenges, test your skills, and chase your place on the leaderboards in Daily Runs, Arena, Survival and Endless game modes. Ride the Synthwave: Get in the zone with a high-energy synthwave soundtrack in partnership with FiXT Neon, featuring artists like Scandroid, 3Force, and Fury Weekend. Upgrade & Take Them Down: Collect a plethora of ability and weapon upgrades. Weapons are varied (from lasers to flamethrowers to weed wackers!) and equipped with their own overdrive states! Modes Campaign: Take on the role of an energy harvester in the midst of a galactic spider invasion. Your choices will lead you to take on one of three potential versions of the game’s protagonist to fight back the invasion on asteroids, space stations, and other intergalactic stages. Each unique version takes the story in a different direction. Arena: Take on over 60 randomized challenges from the game’s campaign for a chance to get your name on the local leaderboard. Survival: Fight through waves of invaders with each wave presenting a new, more difficult challenge. Endless: Tackle waves of randomized challenges from the campaign as well as additional objectives as you adapt to what the game decides to throw your way. Daily Run: You get one shot each day to complete this daily run and achieve the highest score possible. Failed to make the leaderboard today? There’s always a new challenge tomorrow.