☆☆☆☆☆ 358
★★★★★
Get it now
It’s fight for furvival! Super Animal Royale is a 64-player, frenetic, top-down 2D battle royale where murderous animals fight tooth, claw, and machine gun across an abandoned safari park. Collect and customize your favorite critters and weapons, then put them to work in solo matches or team up as a squad of up to four players! Key Features • Survival of the Fittest: Scavenge a variety of powerful weapons, armor and items to become the apex predator in intense 64-player online matches. • The Superest World: Explore a massive, beautifully illustrated 2D island and discover its hidden lore, by chatting with its inhabitants and scouring its rich environments for clues. • Different Stripes for Different Fights: Collect hundreds of animal breeds and customize them with thousands of cosmetic items, weapons, outfits, and even umbrellas! • Evolving Events & Updates: Enjoy an endless stampede of new content, including seasonal outfits, animals, and weapons to collect. • The Fast and the Furriest: Flatten your foes while rolling dirty in a Hamster Ball, or mount a Giant Emu and peck your way to the promised land.

This game is a work in progress. It may or may not change over time or release as a final product. Purchase only if you are comfortable with the current state of the unfinished game. 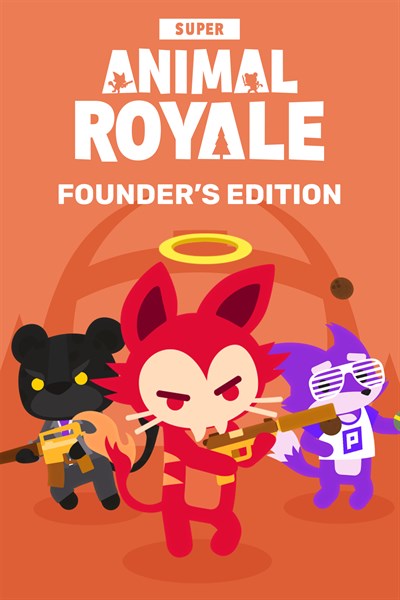 ☆☆☆☆☆ 93
★★★★★
Get it now
This game is a work in progress. It may or may not change over time or release as a final product. Purchase only if you are comfortable with the current state of the unfinished game. Support Super Animal Royale as a Founder and get 3 animal breeds and 10 cosmetics that are exclusive to Early Access and only available in the Founder's Edition. You'll also get your username colored in the orange founder's color to show that you were one of the original supporters of the game! "Included Animal Breeds: Super Hellfire Skullcat Super Pixile Fox Super Black Panther Included Cosmetic Items: Pixile Purple Tee Pixile White Tee Angel Halo Charcoal Suit With Pixile Tie White Shutter Shades Heart Glasses Golden M16 Golden Silenced Pistol Juggling Roulette Emote Fireworks Death Explosion Neither animal breeds nor cosmetic items provide any gameplay advantage.
Product Info:
Developer: Pixile Studios
Publisher: Modus Games
Website: Super Animal Royale
Twitter: @PixileStudios / @Modus_Games / @AnimalRoyale