With Ninja Gaiden: Master Collection hitting Xbox One and Xbox Series X|S this week, one man is working behind the scenes to interact with fans, provide tips to takedown bosses like Doku and Alma, and help teach gamers the legacy behind one of Koei Tecmo and Team Ninja’s most legendary action franchises. Emmanuel Rodriguez, known as “Master” to the Team Ninja faithful, is not only the famed developer’s full-time community manager, he is one of their biggest fans. So big, in fact, that he was offered the job stemming his on-stage talent in the Dead or Alive fighting game scene.

“I started competing in Dead or Alive around 2004, but I had no idea about esports back then, I just started competing in these online events on Xbox,” Rodriguez says, breaking down the early days of the fighting game tournament scene. “I hopped online just to see how good I was compared to everyone else. That was the itch I needed to scratch.

“Right from the beginning, I was playing as Ryu Hayabusa because I always loved him from the Ninja Gaiden series. Online events then turned into offline tournaments, and I wanted to make the best of every event just to get my name out there, so I started trying to win my games in a flashy style or talk trash in between my matches. Pretty soon, the game was being featured in events like the World Cyber Games and EVO and people really started to pay attention to both me and the game. It was the perfect storm.”

In 2011, the Dallas native had the chance to visit Team Ninja headquarters alongside a contingent of the best DOA players from across the world, offering advice on everything from gameplay tweaks to additions he felt the franchise needed to remain elite. By 2012, Rodriguez heard rumors that the studio might hire a community manager and he was in the running for the new role. “When I first heard about it, I was like, cool, but I was never the kind of person to push it and bother them every day like, ‘When are you going to hire me?!’ I was more like, if it happens, it happens, and eventually, it happened.”

Today, Rodriguez works as the bridge between fans and developers across all Team Ninja titles, listening to fans while searching every social media site for the latest ideas or grievances.“ A community manager’s most important role is to be a very good listener,” he explains. “When you have a large group of people talking about certain bugs or wanting something changed or added to the game as DLC, that’s when you bridge that connection. I remember myself as a fan, I would’ve loved to have been able to talk to Team Ninja to ask about their games or tell them what I wanted to see, but back then, there wasn’t that connection. These days, I’m that connection between fans and the developers and I try to interact and clarify things as much as possible just so everyone is on the same page.”

And with Ninja Gaiden: Master Collection’s release this week, Rodriguez knows that the game’s difficulty level might bring added questions from overwhelmed community members who have never previously attempted to tackle a game in the Ninja Gaiden franchise.

“The developers anticipate gamers getting frustrated, but at the same time, Ninja Gaiden holds a special place in gaming history because it’s not only one of the most difficult games out there, it’s one of the most satisfying games to complete,” says Rodriguez. “You’ll be upset a lot, but you’ll be so happy when you finally complete it. You know you’ve accomplished something when you get to the end of a Ninja Gaiden game.”

In anticipation of the game’s release, Rodriguez has already been working on a series of tips and tricks to post on social media and is ready to heed the call of gamers looking for advice on how to bring out the best in Super Ninja, Ryu Hayabusa.

Adds Rodriguez: “To me, being a part of Team Ninja and interacting with our great fans never gets old, especially if I can help them get over that last hurdle and beat Ninja Gaiden. My whole journey just seems so unrealistic to me … I’m living my dream job. I went from loving video games and finding games like Ninja Gaiden and Dead or Alive that I really enjoy, to competing and becoming a professional at it, and now I work in the industry full-time, and I talk about my favorite franchises all day for a living.

“Something about it feels so unreal, but at the same time, I feel like I’m home.”

To follow Master’s journey online (and ask him any nagging Ninja Gaiden questions), check him out on Twitter @oMASTERo. 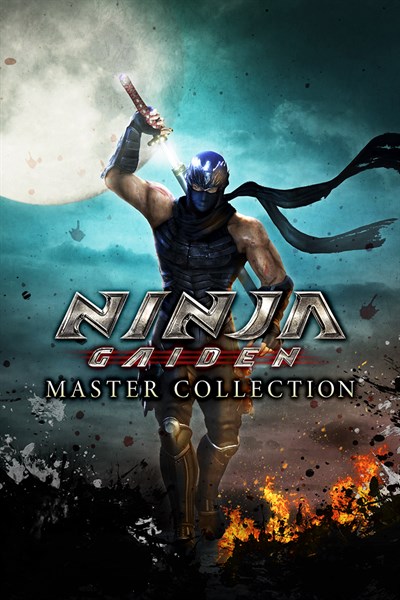 ☆☆☆☆☆ 332
★★★★★
$39.99 $31.99
Get it now
PC Game Pass
Xbox Game Pass
Enjoy 3 games from the NINJA GAIDEN series in this one title.  Each title is still just as fun as you remember while providing the same high speed action of the original releases. Look forward to heated battles with fearsome opponents! In addition to Ryu Hayabusa, 4 other characters, Ayane, Rachel, Momiji, and Kasumi, are also playable. You can create a tag team with your favorite characters and freely swap out the playable character during battles. ※The heroines included in this title are the same as the original versions. In addition, the characters that are playable and scenes (modes) vary for each title. All of the previously released game modes and DLC costumes for each title are included in this one set. In addition to Ryu Hayabusa, each of the other characters also have many different costumes to choose from, allowing you to enjoy action packed battles in whichever outfit you prefer. ■Included Titles NINJA GAIDEN Σ NINJA GAIDEN Σ2 NINJA GAIDEN 3: Razor's Edge ※Online multiplayer is not available for the “TAG MISSIONS” in NINJA GAIDEN Σ2. ※The “Shadow of the world” “Clan battle” for NINJA GAIDEN 3 Razer's Edge is not included.  Online multiplayer is not available for “ninja trials”. ※"NINJA GAIDEN Σ2" and "NINJA GAIDEN 3: Razor's Edge" are also available in Traditional Chinese. ※"NINJA GAIDEN: Master Collection Deluxe Edition" is also available for purchase. Be careful to avoid making a redundant purchase. ※Only Xbox One X, Xbox Series X, and Xbox Series S support 4K resolution. Xbox One S does not support 4K resolution. ※Please uninstall and then reinstall NINJA GAIDEN Σ and NINJA GAIDEN Σ2. This will allow the graphics to display properly. ※If you are using Windows® 11, the requirements for the PC version will conform to the Windows® 11 system requirements. ※For details regarding the PC version, please check the official website.