I’m here to give you the inside deets of the latest dodgeball to hit the streets with the start of Season 2 – Soda Ball!

Dodgebrawlers all over the city have learned how to take advantage of [REDACTED]’s signature Boba Cola blend in their glorious beatdowns across Knockout City. A revolutionary shake-stable substrate has resulted in a soda that remains fizz free no matter how much you run/jump/dodge/glide around with one in your hands.

But dodgebrawlers have discovered a hidden side-effect — the simple act of charging the cola with dodgebrawler energy starts an irreversible chemical reaction. The pressure inside builds, and builds, and builds. In a matter of seconds the spherical container of bubbly boba beverage won’t be able to contain it any longer, exploding and covering everything (and anyone!) around in oopy goopy gunk!

But don’t worry — the soda itself is absolutely harmless and there’ve been no reports of injuries, malfunctions, or lowered self-esteem as a result of getting absolutely soaked in soda. You’ll want to duck and cover real quick though — visibility tends to be poor when your eyeballs are swimming in sugar. Rest assured, we’ve run tests with the best brawlers around; they can confirm that it’s a temporary condition, and all faculties will return to full function momentarily.

That all said, you’ll still want to avoid getting hit by the bottle itself — it will still pack a heckuva punch if ya get hit with it. Just because the explosion doesn’t deal damage doesn’t mean you can rest easy. Up until it explodes, the Soda Ball hurts just as much as any other dodgeball on the market, so be aggressive!

Impeccable quality control standards have left the Soda Ball with an extremely precise fuse (unlike some other explosive ordnance one may come across throughout the city), so all parties will always know exactly when it will blow. Keep an ear out for the unmistakable sound of incoming carbonated catastrophe and get your backup plan ready.

Should you find yourself discombobulated due to a nearby detonation of delicious drinkage, our experts recommend a quick dose of “hide in your teammates’ hands” until the danger passes. Turns out you don’t need to see to be able to be thrown yourself! And that goes double if you see your own teammate get splatted – be sure to tell them ‘Ball Up’ so you can carry them (and your team) to safety.

Of course, if you find a foe that’s all fizzed up, feel free to delete them at your own leisure. Take advantage of their reduced awareness and blast them out of existence before they can recover! Or just hit them with a dodgeball or two. Whatever floats your boat.

That just about wraps what I gotta say about the Soda Ball. Use it to cover your opponents in goop, then tag them while they can’t defend themselves! If you get caught in the goop yourself, find a friend and let them hold you. Or just go beast mode and start blasting while blind. Also an option. Until next time, see you in Season 2 of Knockout City, Fight at the Movies! 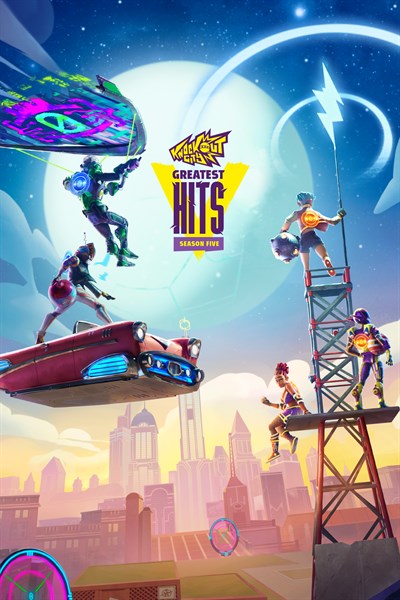 ☆☆☆☆☆ 321
★★★★★
$19.99 $17.99
Get it now
Free Trial
Knockout City is transitioning to a Free-to-Play model, beginning June 1 with Season 6. For those who have purchased and played the game before then, when Season 6 launches, you’ll receive a special bundle we’re calling the *Loyalty Royalty Bonus for all of you as a thank you for supporting us from the beginning, with some exclusive legendary cosmetics, XP boosts, and 2,000 Holobux. *where applicable Optimized for Xbox Series X|S. Knockout City™ leverages Xbox Smart Delivery allowing access to both the Xbox One title and Xbox Series X|S title. Support.xbox.com Calling all brawlers: join us in Knockout City™ today for a FREE, level-capped trial*! Team up and duke it out with rival Crews in Knockout City**, where you settle the score with EPIC DODGEBALL BATTLES. Brace yourself for outrageous fun and intense competition in an all-new take on team-based multiplayer games. Customize your character and form a Crew with friends to start your Knockout City takeover. Knock out opponents with trick shots and coordinated teamwork while dodging and catching balls flying across the map. No ball? No problem! You can literally ball up, roll into a teammate’s hands, and become the ultimate weapon! A variety of outlandish ball types, locations, and game modes keep it exciting. Plus, each season introduces new maps, ball types, rewards, events, and challenges. Throw, catch, pass, dodge, and tackle your way to dodgeball dominance! KEY FEATURES: • Frantic and Fun — Rule the city through lightning-fast multiplayer matches featuring mind-blowing dodgeball mechanics. Increase your attack by passing to power up dodgeballs, targeting your opponents with a variety of specialized balls, or “balling up” at any time to get thrown by teammates! • Crew Up — Assemble an All-Star dodgeball Crew with your friends for multiplayer matches in a seamless cross-play experience! Together, knock out opponents in 3v3, 4v4, or free-for-all matches. Pass, throw, and strategize to dominate as a team and unlock distinctive, Crew-only rewards! • Define Your Style — Show off your status and unique look through character and Crew designs with expansive character creation options. Customize your appearance, gear, and attitude, from body type and hairstyle to a custom glider and Crew vehicle to win, lose, and taunt animations. • Take On Knockout City — Battle it out with other Crews across dynamic maps all over the city. Each map’s special features make every match an intense, unexpected experience. Dodgeball thrives in back alleys with pneumatic tubes, on skyscraper rooftops, across busy streets—and even at the local burger joint and construction sites. While you’re dodging dodgeballs, watch out for moving cars, rooftop drops, and even a wrecking ball or two. • Strikingly Fresh Yet Familiar — It’s easy to pick up and play thanks to familiar controls, but practice is key to becoming a champion. On a level playing field, only the most skilled ballers stand out from the crowd. Use your knowledge to master the intricacies of the game for spectacular KOs. Holobux you purchase from the Microsoft Store can't be transferred to or used on other platforms. *Limited free trial capped at level 25. Trial is subject to change. Internet connection, EA account and acceptance of EA User Agreement (terms.ea.com) & Privacy and Cookie Policy (privacy.ea.com) required to play. Trial can be played once per EA account. **CONDITIONS AND RESTRICTIONS APPLY. SEE WWW.EA.COM/LEGAL FOR DETAILS. © 2021 Velan Studio, Inc. EA and the EA logo are trademarks of Electronic Arts Inc. Trademarks are the property of their respective owners. Buy the Xbox Series X|S version and get the Xbox One version (Digital Standard or Deluxe Editions) for no additional cost.