The skies darken and the sun is setting… evil is bound to take a firmer hold soon. In Black Book, you take the role of a young witch named Vasilisa, on her perilous journey to rescue her beloved. I’ll share with you some details as to what you can expect from the journey of a young sorceress in the dark, rural corners of Cherdyn, her homeland.

In Cherdyn, the occult is on every step of peasant life. Wise and knowledgeable people learn how to fight off evil or how to command it. Witches — or Knowers, as they call them locally — possess arcane knowledge powerful enough to cast curses, spells, and even blessings. From their teachers, they inherit their knowledge of spells, herbs, and the arcane. Some of them even command a flock of unholy demons to do their bidding.

Peasants often approach Knowers with gifts and plead to help them resolve issues with all matters occult, arcane, or health-related. Every Knower has a history and reputation, and your actions will shape Vasilisa’s image in the eyes of Cherdyn’s citizens.

Command your flock of imps

Due to their nature born of Hell, the imps are restless and desire to torment, sow chaos and cause mischief. Vasilisa, like every Knower, carries a heavy burden. Will you let them torment her or send them away to torment someone else, though it is sinful? The choice is difficult to make. Perhaps there is a clever way to have to do something meaningless, but that is for you to discover.

Unlock the secrets of the Black Book

The Black Book is a powerful and ancient artifact of unknown origins, said to fulfill any wish of a person who manages to break all 7 of its seals. Old Egor, her teacher, passed this book to her in the rite of succession. The last seal is Vasilisa’s only hope to bring her beloved from the dead, and her sole objective. She has only 40 days before his soul departs from this world.

Following Vasilisa’s journey to break the Book’s seals, you will face mythical enemies and creatures, some of which are believed to be folk tales and nothing other than that. With every broken seal, her power will grow.

Vasilisa’s natural talent for the occult, together with the Black Book, makes her a force to reckoned with. The Book has Black and White pages — curses and blessings — both of which can be weaved into zagovors; mighty combination spells. Even with your powerful sorcery, your enemies will require a unique approach to deal with.

Vasilisa is not all about battling evil and slinging spells, however. She is well versed in card games, and does not shy to go for a round or two of Durak, a local card game, which you can also play with your companions or locals.

Empower yourself with wards, amulets, and herbs

A little bit of magic rubs off on many things, like charms, amulets, rite items, and many others. The earth itself springs with magic, accumulating amazing properties in herbs and roots found all around Cherdyn. Select the right trinkets for the journey, stack on magical herbs, and journey forth towards the unknown.

Along with Vasilisa, you will travel at the edge of worlds, finding the thinnest edge where worlds collide. Your actions determine the outcome of her adventure, including her companions that you may take along with you. Stay true to your moral compass, prepare well for battles with evil, and discover what it is like to be a Witch out of time…

See you in Cherdyn, Knowers. 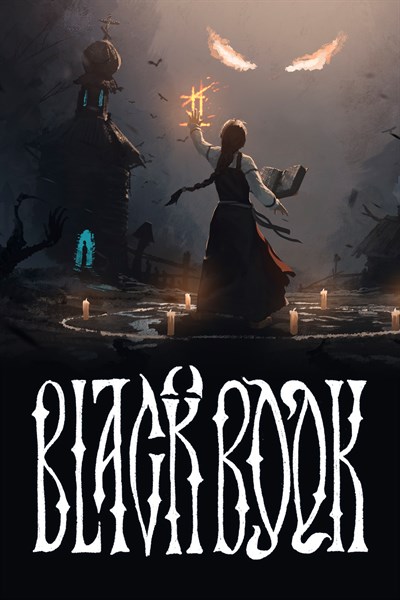 ☆☆☆☆☆ 16
★★★★★
$24.99
Get it now
A fusion of card-based RPGs and Adventure games, “Black Book” is a haunting tale of a young sorceress, who gave her life to serve the dark forces. Dive into the cold, yet alluring world of Slavic folktales – and uncover the secrets that hide in the darkness. A young girl named Vasilisa, destined to become a witch, decides to throw her fate away and marry her beloved – but that dream is shattered when her betrothed dies under mysterious circumstances. Aching for her lost love, Vasilisa seeks out the Black Book – a demonic artifact, said to be powerful enough to grant any wish to the one who uncovers all 7 of its seals. Join Vasilisa in her adventures across the rural countryside, as she solves the woes of common folk by confronting demons and performing exorcisms. Uncover the seals of Black Book Unleash hellish spells on your enemies! Collect spell cards and new skills as you progress. A Historic Adventure Solve riddles and complete side-quests as you learn more about life in the Slavic countryside. Lead a Demonic Flock Send demons to do your bidding, but be careful – idle demons will torture you if you don’t find them something to do! Myths and legends Explore a world based on Northern Slavic mythology. Learn from an in-game encyclopedia, created with the help of expert anthropologists – and find all folk tales hidden within the game!