Space… where no one can hear you vomit. Unless it’s your fellow passengers or the crew of your intergalactic airline.

Spacelines From the Far Out is a comedic co-op, rogue-lite, airline tycoon simulating, otherworldly adventure game that blends the golden era of air travel with the utopian space age of the 1960s. Imagine if the “Jetsons” somehow had a baby with Overcooked and FTL and you’re kind of on the right track.

Today, we’ve got some important news – Spacelines from the Far Out is officially launching on Xbox One, Xbox Series X|S, and Windows PC on November 4, 2021.

Now, let’s tell you a bit more about our game…

Years after we first put our little “spaceline crew” in orbit, we’re almost ready to take off for the far reaches of the cosmos.

In Spacelines from the Far Out, you’ll create your own intergalactic airline, customize, and upgrade your starcruiser, pick up passengers throughout the cosmos, entertain them, feed them, and keep them safe all while dodging asteroids, keeping the health inspectors off your backs, and hopefully not running out of fuel along the way…

If you crash? Well, you’ll take what you’ve earned and learned, and try again until you’ve unlocked every add-on, purchased every ship, and become the veritable kings of the interstellar highway.

Spacelines From the Far Out can be played solo or with up to 4 players both online and in local co-op play. And yes, it’s cross-platform between Windows PC, Xbox One, and Xbox Series X|S!

What started as a student project in our home of São Paulo, Brazil, quickly garnered a lot of attention at indie game events and conventions. We formed Coffeenauts to take Spacelines from the Far Out from school assignment to actual game, and we never looked back.

We found the perfect partner to publish the game in the form of Skystone Games – founded by Diablo-creator David Brevik and Perfect World Entertainment alum Bill Wang. These guys know how hard navigating the world of indie games is and are focused on helping young studios like ours make the best game possible in an incredibly crowded industry.

Spacelines From the Far Out is coming out on Xbox One, Xbox Series X|S, and Windows PC on November 4, and we hope you’ll take this journey with us… we promise to clean up your vomit and dance for you as often as we can.

Pre-orders with special bonuses will be available soon on the Xbox Store! 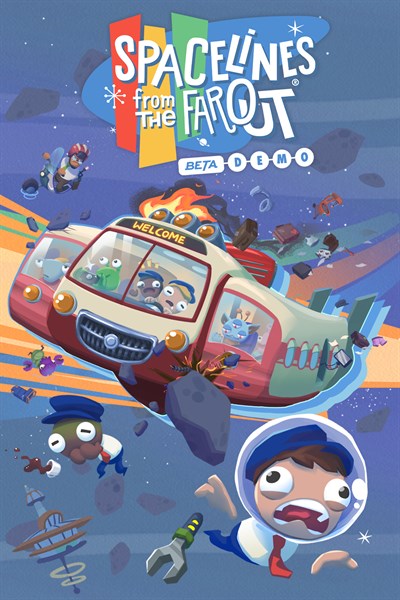 Spacelines from the Far Out – Beta Demo

☆☆☆☆☆ 10
★★★★★
Get it now
In A Galaxy Far, Far Procedural… Welcome to 'Spacelines from the Far Out' a game that blends the golden era of air travel with the utopian space age of the ’60s, with a unique blend of non-violent co-op and roguelike gameplay! An original sci-fi universe filled with all the annoyances you’ve come to expect from being in the commercial Spaceline industry, in a space odyssey adventure for you, or with up to 4 friends. And thanks to the robust (and sometimes mean) AI Director, every trip feels chaotically unique. No one said this was going to be easy: With tons of mechanics in store for you to master (or survive), such as piloting, repairing, cleaning, cooking, and dancing, you’ll never be bored! And for all the space-treasure hunters out there: Tons of unlockable upgrades, ships, playable characters to collect, and more are waiting for you on the event horizon.