Doctor Who: The Edge of Reality lands on Xbox One and Xbox Series X|S on October 14, and we’re sharing a closer look at the Doctor’s latest time-travel adventure, featuring Daleks, Cybermen, Weeping Angels and not one Time Lord, but two.

The universe of Doctor Who offers a world of possibilities, where ordinary people are swept up in extraordinary adventures, and that’s exactly what’s in store for players in The Edge of Reality. When a Reality Virus starts causing troubling time glitches, the Doctor (played by Jodie Whittaker) needs your help. Immediately you become immersed in your very own Doctor Who episode, filled with humor, heart, and high-stakes jeopardy.

As you progress through the story you’ll meet some familiar faces – and foes. Navigate the CyberShip and avoid being deleted by patrolling Cybermen, blast your way off the Daleks’ home planet and keep your eyes on any dark corners for lurking Weeping Angels. Doctor Who: The Edge of Reality also introduces a brand-new monster created exclusively for the game: the CyberReaper. This terrifying new nemesis adds to the mythology of the Cybermen and is more dangerous than any Cyberman that has come before it.

Of course, the Doctor will be on hand to guide you on your mission, along with your very own companion, Emer. But as the Reality Virus breaks down the laws of physics, even the Doctor can’t escape its effects. Appearing as the Tenth Doctor, David Tennant reprises his role and takes the player on a timey-wimey quest through the Chaosverse. An original concept spanning multiple levels, the Chaosverse is an area of extreme danger, with some surprising Doctor Who twists. Eagle-eyed fans should also be on the look out for easter eggs scattered through the game. (Fish fingers and custard, anyone?)

It wouldn’t be a Doctor Who episode without a trip in the TARDIS, and during your mission you’ll travel across time and space, from Mars to a Victorian mansion, to uncover the mystery behind the virus. Will you solve it before it’s too late? Time will tell…

We hope that Doctor Who fans and fans of story-rich adventure games will enjoy Doctor Who: The Edge of Reality when it launches on Xbox One and Xbox Series X|S on October 14. Just remember, don’t blink! 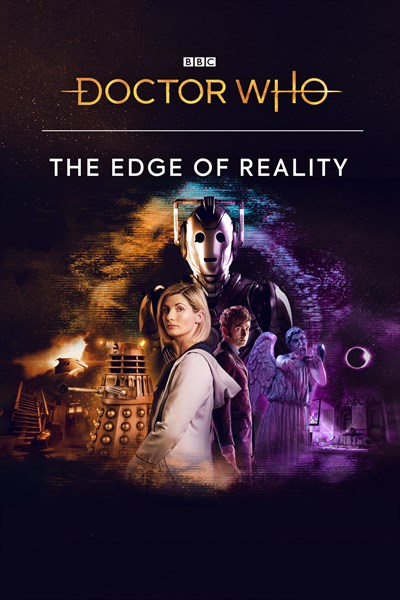 Doctor Who: The Edge of Reality

☆☆☆☆☆ 28
★★★★★
$24.99
Get it now
Wield the sonic screwdriver as you join the Thirteenth Doctor (voiced by Jodie Whittaker) on a quest to save the universe, and meet the Tenth Doctor along the way (voiced by David Tennant in a guest appearance). Experience an unforgettable adventure through space and time, face terrifying monsters and solve a mind-bending mystery!