In Disciples: Liberation, available now for Xbox One and Xbox Series X|S, you’ll gradually uncover details about Avyanna as you progress through the 80-hour game. Without spoiling late-game reveals, here is her unfinished biography.

Disciples: Liberation is a story of dichotomies. Mortals and their gods. A cruel past and a bright future. Death and life. Innocence and its loss. Secrecy and truth. Heroism and suffering. And, at the center of the tale is Avyanna, herself an image of the divine and the profane. You will follow her story in real time and explore a breathing, vivid world filled with magic, mystery and political intrigue.

Starting out as an unknown and petty mercenary, her quest will lead you through sorrow and bloodshed before she eventually gains control of a mighty army, ready to challenge fate. Avyanna is a child of two worlds, yet part of none, who is on a journey through a dark and war-torn world and longing for a home to call her own.  She fights against her past and yearns to build a place of sanctuary for herself and all the outcasts, misfits and freedom fighters of Nevendaar.

She rose from lowly beginnings and had only herself and her friend Orion to depend on. Together, they formed the Twilight Twins, mercenaries for hire. It was a hard life, spent fighting for every coin and sleeping with one eye open. But it made her sharp. It made her cunning. It made her a warrior.

Still, Avyanna was smart enough to know this was not a life she could live forever. So, when she found the abandoned, mysterious Castle of Yllian, she decided that would be her new home. It would be a reflection of the world she wanted to live in – a beacon of strength, peace, and acceptance. A place where all the races of the world would be included and considered equal.

And though the world of Nevendaar is a dark and punishing place, Avyanna’s burdens are greater. She is a leader of a young nation, and she aspires to the ideals of freedom and liberty in a world that’s only known despots and tyrants. Yet within her mind, she feels her demonic heritage calling her to rain fire down on the world.

But the world will not change so easily. Nor will the demons that lurk within it. So Avyanna found herself facing a world falling head-first into the war she helped cause. She is also facing her own dark impulses as she rises to become The Liberator.

With all of this, it’s up to you to decide what sort of leader she will become. With your army, which can be recruited from over 50 units, you’ll fight complex turn-based battles against beastly creatures, in which only proper tactics will lead to victory. Avyanna will be able to join forces with the Legion of the Damned, the Undead Hordes, the Elven Alliance and the Empire.

The most profound way to impact the story and gameplay of Disciples: Liberation is through interacting with the four factions – as Avyanna has a standing with each, and that standing influences the ending of the game.

In the game, no choice is made for you, nor does the story punish you for such choices: every choice is valid, and many options allow you to explore Avyanna’s cruelty, should you desire. Mind your choices, explore, and enjoy. And keep in mind Avyanna’s motto: “Regret later. Act now.” 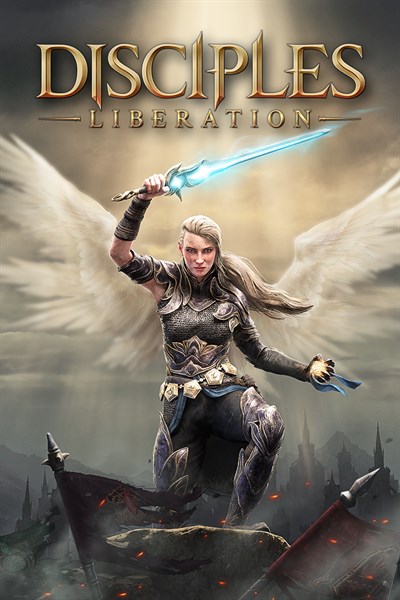 ☆☆☆☆☆ 283
★★★★★
$49.99
Get it now
Disciples: Liberation is a mature, dark fantasy strategy RPG with turn-based combat. Liberate the land of Nevendaar and uncover the endless stories hidden within this richly detailed world where every decision has a consequence, and every wrong move could be deadly. Explore a rich overworld and align with a variety of in-world factions: from a human empire tinged by religious extremism to the dark forces of the undead lead by a mad queen. Assemble a team to gather precious resources, sway political standing, and take on brutal beasts in intricate turn-based battles. Choice is everything in Disciples: Liberation and it is up to you how you write your story. Features: • 80+ hour single-player campaign: experience a sprawling dark fantasy epic over three acts, with more than 270 quests and objectives, and five unique endings to unlock • Explore a war-torn realm: journey through a sprawling world in ruin and work to unearth its endless secrets, hidden treasures, and bloody past • Write your own story: pick from four uniquely skilled classes and define your place in the world, recruiting others to your cause from an assortment of factions • Build a base: take on quests for precious resources and use your political savvy to build a place of planning and sanctuary • Fight for your life: recruit 50+ units and amass an army best suited to your play style; hone both steel and spell in intricate-turned based combat. • Challenge deadly bosses: test your mettle and pit your party against horrific monsters and beasts, each requiring a unique strategy • Choice is everything: let your decisions guide your fate and directly influence what sort of leader you become • Fight your friends: put forth the ultimate challenge and battle for supremacy in 2-player online skirmishes