Hey Racers! It’s been a long time since our last closed beta, but we’re just about ready to roll with the latest version of this epic kart racer coming to Xbox One this December. As a refresher, KartRider: Drift is the only free-to-play, cross-platform racing title with deep character and kart customization systems.

For those new to the franchise, KartRider: Drift is the latest generation in the KartRider franchise, which inherits the original Crazyracing KartRider’s fun and kart-racing mechanisms. While keeping nostalgia alive, this new title introduces next-generation graphics using Unreal Engine 4 alongside improved gameplay systems with cross-play and cross-progression support. In this upcoming closed beta, you’ll be able to play with racers worldwide in real time.

Join us from December 8 through December 15 for the third KartRider: Drift closed beta.

Visit kartriderdrift.com to sign up for the closed beta. Invitations will be on a limited basis, and will be sent starting December 6, so sign up today for a chance to race!

In Item Mode, you can collect and use over 15 distinct items to attack, defend, and even support your allies in team races. Alternatively, for players that enjoy fast-paced competitive racing, be sure to check out Speed Mode, where skillful drifting will help you fill your boost gauge to blast off ahead of other karts and claim victory!

Customize Your Kart and Racer and Hit the Road in Style

One of the biggest new features we can’t wait for you to experience is the Livery System. Imagine being able to customize the color, pattern, wraps, and decals of your kart to create your own unique design. We provide some existing designs as reference but really want you to leverage the decals to find your perfect style and create some share-worthy UGC.

We are also excited to introduce you to some new karts (it IS a kart racing game after all), including Brutus, Justice, Saber, Spider, and Storm…which look as awesome as they sound! And make pretty good names for kittens as well.

But what good is a sweet new ride without a superstar driver behind the wheel?  In addition to the current cast of characters, KartRider: Drift introduces you to the mysterious Neo (not that one), the fearsome Rex, and the queen of selfies Marid in Closed Beta 3.

Lastly, you’ll discover 15 new tracks on top of the existing 16 tracks that beta participants have seen previously. You can explore city traffic, icy glaciers, dusty deserts, spooky graveyards, or a flaming hot course where lava explodes onto the track. Let us know your favorites after trying them all!

We Can’t Wait to See You on the Tracks!

Again we are delighted to announce that the KartRider: Drift closed beta will be available on Xbox One starting on Wednesday, December 8. All new and returning racers are welcome to join the fun. Sign up for the beta now and rev up your engines until the race begins! 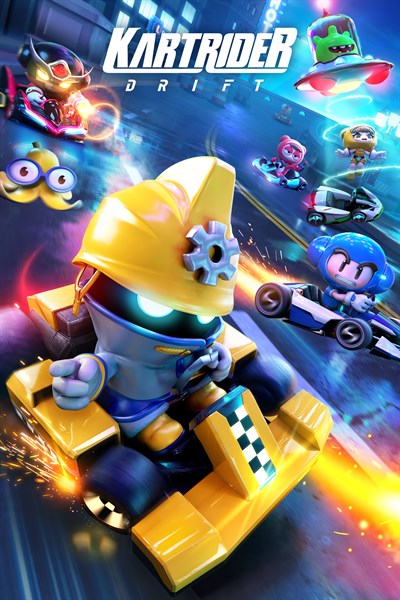 ☆☆☆☆☆
★★★★★
Get it now
Welcome to the newest free-to-play title in the popular multiplayer racing franchise with over 300 million players! KartRider: Drift is the only free-to-play, cross-platform kart racer where arcade thrills, the fastest drift fueled skilled competition, & deep kart + character customization in stunning Unreal® Engine 4 graphics awaits you on the track. Challenge your friends across platforms with no barriers, no Pay Walls, & no Pay To Win elements preventing you from having a great time while topping the leaderboards. Created from the ground up for dynamic, online gameplay there’s new content being added regularly and huge content updates every Season. No Limits.