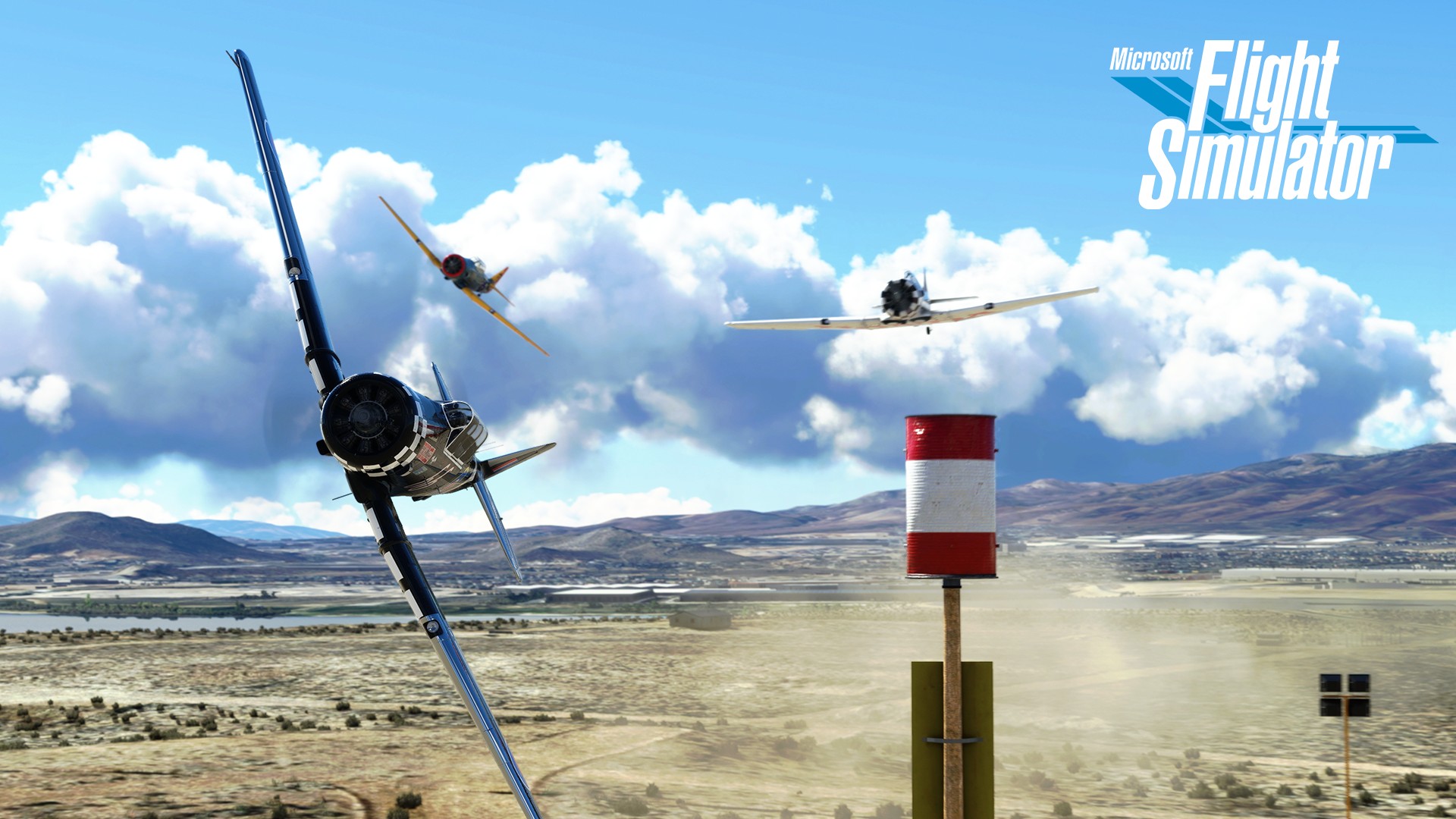 Experience the Fastest Motorsport in the World Starting Today!

For those who just want to get their feet wet and race with friends, the Reno Air Races: Expansion Pack is a great entry point. It includes the exhilarating, online multiplayer racing experience along with four highly detailed starter aircraft: a North American T-6 Texan, a North American P-51 Mustang, an Aero L-39 Albatros, and an Aviat Pitts Special S1S – for only $19.99.

The Microsoft Flight Simulator team worked closely with the Reno Air Racing Association (RARA) and dozens of pilots and owners to develop highly authentic recreations of many of the world’s most famous racing aircraft.

We can’t wait for you and your friends to experience this thrilling air racing experience starting today. Visit the Microsoft Flight Simulator in-game marketplace to see all the planes included in the Reno Air Races: Full Collection. The sky is calling!

☆☆☆☆☆ 307
★★★★★
$59.99 $47.99
Get it now
PC Game Pass
Xbox Game Pass
The Microsoft Flight Simulator Game of the Year (GOTY) Standard Edition celebrates all the positive feedback, reviews and awards garnered, but it is also a “Thank You” to our fans – new and old – that have made Microsoft Flight Simulator such a phenomenon. The Microsoft Flight Simulator Standard Game of the Year Edition includes 25 highly detailed planes with unique flight models and 38 hand-crafted airports. This enhanced edition introduces simmers to five all-new aircraft, eight new handcrafted airports, six new Discovery Flights, new tutorials, and updates to the weather system The five new handcrafted aircraft in Microsoft Flight Simulator include: • Boeing F/A-18 Super Hornet: Our first military jet and a highly requested feature from the community. The Top Gun: Maverick expansion will release with the movie next Spring, but we wanted simmers to have the opportunity to test their need for speed this holiday. • VoloCity: We partnered with well-known German company Volocopter, which is working on an eVTOL called “VoloCity”, a vision for an urban air taxi. We worked closely with the Volocopter engineering team to develop an authentic version of the prototype aircraft for the simulator. This is our first aircraft that can perform pinpoint landings and is a teaser of what you can look forward to in 2022 when we intend to launch helicopters in the sim. • Pilatus PC-6 Porter: This legendary short takeoff and landing (STOL) utility aircraft is a highly versatile plane from Switzerland and comes with several cockpits, cabins, and landing gear variations. It is the result of our close collaboration with the manufacturer and the development efforts by famed developers Hans Hartmann and Alexander Metzger resulted in a great and fun new aircraft with exception capabilities in the simulator. • CubCrafters NX Cub: Yakima-based CubCrafters recently introduced a nosewheel option for their flagship CC-19 XCub Aircraft, popularly called the NX Cub, which we are pleased to introduce to the flight sim audience to further enhance our bush flying and off airport options. • Aviat Pitts Special S1S: One of our most popular planes gets a single-seat option with the release of this aircraft. New Airports – We are adding eight handcrafted airports in Central Europe and the United States: • Germany o Leipzig/Halle Airport (EDDP) o Allgäu Airport Memmingen (EDJA) o Kassel Airport (EDVK) •Switzerland o Lugano Airport (LSZA) o Zurich Airport (LSZH) o Luzern-Beromunster Airport (LSZO) •United States o Patrick Space Force Base (KCOF) o Marine Corps Air Station Miramar (KNKX) The Game of the Year release is adding information about 545 previously missing airports in the United States. New Missions -Based on the popularity of the recently introduced Discovery Flights, we are adding an additional six locations (Helsinki, Freiburg im Breisgau, Mecca, Monument Valley, Singapore, and Mount Cook) to this popular series. New Tutorials – To further expand the onboarding experience, we are adding 14 new tutorials, introducing simmers to Bush flying (in an Icon A5) and IFR (in a Cessna 172). New Features – We are also pleased to introduce several highly requested features by the community: an updated weather system, early access to DX12, and a dev mode replay system. New Photogrammetry Cities – As part of our ongoing collaboration with Bing Maps, we are pleased to add a number of new photogrammetry cities: Helsinki (Finland), Freiburg im Breisgau (Germany), Brighton, Derby, Eastbourne, Newcastle, and Nottingham (UK) and Utrecht (Netherlands). Microsoft Flight Simulator Standard Game of the Year Edition will be available as a free update for owners on PC and Xbox Series X|S. For new users, the GOTY Standard Edition is the perfect entry point to flight simming as it offers an even richer experience, and it will be the item they purchase as we are retiring the original. Invite your friends to experience the wonders of flight. The sky is calling!