Besiege Console (Game Preview) is launching February 10 for both Xbox One, Xbox Series X|S, and with Xbox Game Pass! Besiege Console is a physics building game where you construct war machines to obliterate fortresses, annihilate legions of soldiers, navigate hazards, and solve physics puzzles. In the single-player campaign you’ll conquer your way through four distinct islands, each with its own theme, packed with fully destructible levels and see you bring your enemies to their knees.

The game contains a whole host of advanced building tools and tons of blocks to help you build your ultimate weapon of destruction and mayhem. Use the time slider to put things in slow motion and watch your carnage unfold like cinematic genius!

Those of you familiar with the PC version of Besiege will find that the game has been heavily reworked, with large sections redeveloped form the ground up to provide a greatly improved gameplay experience, with an all-new interface specifically designed for seamless interaction with a controller.

Besiege Console also contains an all-new Workshop for sharing machines that has some cool new features built into it, like the “Screenshot Tool” which helps you create an attractive thumbnail for your machines and even customize their backgrounds!

Besiege Console has had a lot of love and care poured into its development, we wanted to make a console version of Besiege that we could all be proud of and that players new & old could enjoy.

We hope you’re as excited as we are about releasing this game and if you like smashing things up and/or building weird & wonderful contraptions you should check it out! 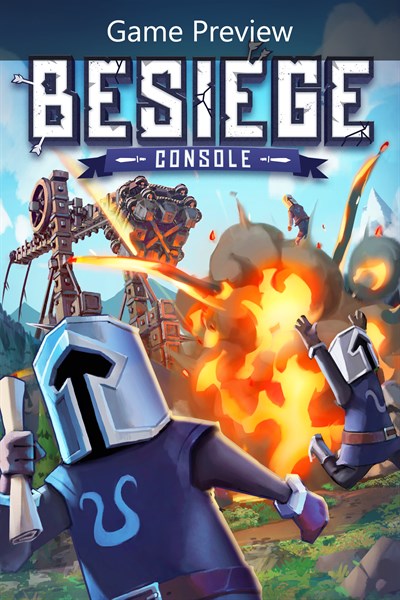 ☆☆☆☆☆ 203
★★★★★
$19.99 $15.99
Get it now
Xbox Game Pass
Free Trial
Besiege is a physics based building game in which you construct medieval siege engines and lay waste to immense fortresses and peaceful hamlets. Build a machine which can crush windmills, wipe out battalions of brave soldiers and transport valuable resources, defending your creation against cannons, archers and whatever else the desperate enemies have at their disposal. Create a trundling behemoth, or take clumsily to the skies, and cause carnage in fully destructible environments. Ultimately, you must conquer every Kingdom by crippling their castles and annihilating their men and livestock, in as creative or clinical a manner as possible! Game Preview This game is a work in progress. It may or may not change over time or release as a final product. Purchase only if you are comfortable with the current state of the unfinished game.