In case you missed the news from a few weeks ago, the JRPG Edge of Eternity is now available with Xbox Game Pass and PC Game Pass. Let’s take a look at the origins of this colossal project from the French company Midgar Studio with its founder, Jérémy Zeler-Maury.

How was Edge of Eternity born?

Originally, we were making small games that followed market trends, and we saw that they weren’t necessarily doing very well. So, we thought we’d make one more game, and if it did well, we’d continue, and if it didn’t, we’d stop. As we were big fans of Japanese games, of Final Fantasy, we said to ourselves that we were going to try with a JRPG. In our head, at the time, the ambition was to make a small game, we did not anticipate the success that it met on Kickstarter. When we saw the amount of money raised and the number of comments from players, we revised the ambitions of the project to match these expectations. Looking back today, we realize that we started as amateurs and that it is this development that made us professional. We don’t regret the experience at all, it was very formative, very enriching.

How would you sum up the game?

It’s a mix between Japanese and Western influences. There are a lot of themes and narrative elements that we are more used to seeing in Western RPGs like The Witcher for example. We are at the crossroads of worlds. We respect the codes of the genre, to better deconstruct them. In the game, an alien race attacks the planet and releases a deadly virus that decimates the population. The mother of our main characters is affected, and our heroes go on a quest to find a cure. As the adventure unfolds, we quickly realize that appearances can be deceiving, we will meet other characters, discover secrets and more.

Fighting is at the heart of any JRPG, can you tell us more about the fighting in the title?

We wanted the first layer of gameplay to be familiar to classic JRPG players, with a turn-based combat system. But we added a second layer of gameplay, more strategic, which allows you to move your characters during the fight, to integrate the scenery into the confrontations, like in Divinity 2 for example. Some special abilities work in synergy with others to create combos, you have the possibility to catch the enemy from behind, etc. Again, we have modernized a traditional system with more western elements.

The genre also implies to leave a certain freedom to the players in the progression, how did you deal with this issue?

I myself tend to play in a linear fashion, and even then, the title is still long, between 25 and 30 hours, in a straight line. We’ve also incorporated accessibility features, such as a system that ensures that your enemies are always at the same level as your team. Players can really customize the experience, whether you prefer to have more or less guidance, consistent challenges or not for example.

The game has evolved since its first hours in early access, what role has the community played?

The feedback from the community has helped us a lot. We were able to rebalance the game, add enemies, characters, make battles more complex, rework the animations to make the cities livelier… and include Japanese dubbing. Many players consider that this is part of the codes of the genre, and we received a lot of requests in this sense. So, we worked with an editor in Japan, who did the voice acting.

You also had the chance to work with Yasunori Mitsuda, a legendary composer, how did this collaboration come about?

On Hover, our previous game, we worked with Hideki Naganuma, the composer of Jet Set Radio. We just sent an email… We realized that these people were working for a lot of big companies, in a very structured environment, and that getting out of the box and collaborating with an independent studio could make them very happy. And it was the same with Yasunori Mitsuda, we made him discover new orchestras… He was as happy to work with us as we were with him, it allowed him to experiment new things. The French-Japanese collaborations are really part of the identity of our studio, it’s really something I want to continue to develop in the future.

What do you think of Game Pass as a developer and as a player?

Of course, it will allow us to reach a wider audience. Microsoft’s support for independent teams, taking crazy bets, is really cool for developers. Personally, as a gamer, I didn’t play that many indie games, and with Game Pass, I’ve been able to try a lot of titles. I also like the cross-platform aspect, I play a lot in the cloud. I install my game on the PC, I go on the TV, then on the phone… Right now, I’m playing Nobody Saves the World which is really cool! It’s the discovery that I like, it forces me to think outside the box.

Thanks to Jérémy Zeler-Maury for taking the time to answer our questions. Edge of Eternity is available to play today with Xbox Game Pass and PC Game Pass. 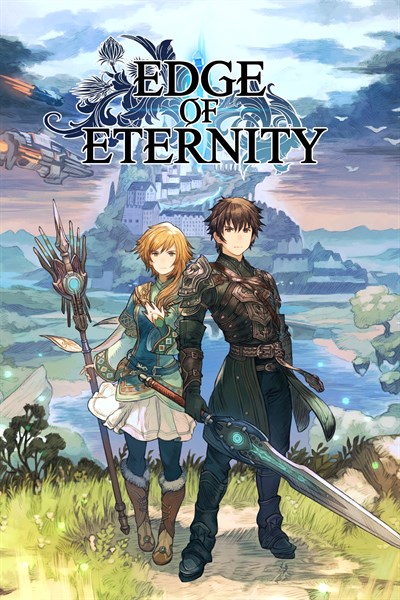 ☆☆☆☆☆ 195
★★★★★
$29.99 $23.99
Get it now
PC Game Pass
Xbox Game Pass
Wage epic turn-based battles as you follow Daryon and Selene on their quest to find a cure to the all-consuming Corrosion in this grand tale of hope and sacrifice. Key features: An enthralling story filled with plot twists and heart-wrenching moments A gorgeous fantasy world to explore Epic battles with a unique and strategic turn-based combat system Charismatic and unforgettable characters Stunning soundtrack featuring Yasunori Mitsuda (Chrono Trigger & Xenoblade Chronicles) An advanced crafting system A giant two-tailed cat-mount! Entirely voiced in English and Japanese 50+ hours of gameplay!