My name is Sandro de Paula, from Brazil, and I’ve wanted to be a game developer since childhood. I had my first real contact with game development tools when I was 14, but it didn’t seem like a viable career for me back then. There weren’t many opportunities in my country, so I decided to pursue other interests, such as music and journalism. Around 2012, when the first wave of commercially successful indie games happened internationally I was convinced it was now possible to make it as a solo developer, and began working on it more seriously, learning and experimenting. My first “real” project was a mobile runner pixel art game called Meow Sushi Night, released for Android in 2014, and then I started working on Slipstream soon after.

The Origins of Slipstream

This might be unexpected, but the idea behind Slipstream started as just a technical curiosity. I had recently finished Meow Sushi Night and I felt I understood how 2D graphics worked reasonably well, but I kept wondering: “How did those classic racing games create a 3D perspective in pure 2D hardware?”. I did a little research and was immediately fascinated by the pseudo-3D technique, decided to try to make my own implementation, and the project grew from there. I had played some classic racing games before, such as OutRun, F-Zero and Top Gear, but it didn’t really become a passion until I started working on Slipstream. Lots of racing games focus on creating a realistic physical simulation of how cars work, but the racing genre also lends itself very well to a more stylized, expressive approach, and that’s the direction I tried to follow. I wanted to give people the fantasy of a colorful worldwide road trip, like OutRun did back then.

The Evolution of the Mechanics. What Makes Slipstream a Different Arcade Racer?

I think the drifting and the slipstream have always been essential to the game. The first demo I published in 2015 had neither, and the gameplay felt too basic and barebones back then. Despite being the name of the game, the slipstream mechanic wasn’t there from the start, but it was a natural fit. The ideas for both the drifting and the slipstream were inspired by OutRun 2006/Coast 2 Coast, which was an attempt by Sega themselves to modernize the gameplay of the original OutRun. I really dislike manual transmission mechanics in old racing games, switching gears manually in a non-realistic racer is not very fun, so I never considered using that as a mechanic, but the game still needed something for the player to do besides accelerating and turning. The rewind was the most recent addition to the core mechanics, and I think it was a good one, it gives the player a strategic opportunity to retry a hard turn or undo a crash. All the mechanics were added very naturally, I didn’t plan too much, I just tried stuff out and iterated until it felt fun or satisfying.

The Slipstream Soundtrack and Its Inspirations.

The soundtrack in Slipstream is a very characteristic part of the game. It was created by my friend and collaborator from the USA, Stefan Moser, aka Effoharkay, who also made the soundtrack for my Meow Sushi Night. The soundtrack was created in parallel with the game, so it had a lot of direct influence over how the game turned out. At times, I felt like I was creating a game for the soundtrack, instead of the opposite. The game would definitely not be the same without those songs. From my perspective, it’s a mix of influences, from80s synthpop, 2010s vaporwave and synthwave to jazz fusion and eurobeat. The soundtrack is a diegetic part of the game, it’s the music you’re playing in the car while driving, so it isn’t made to fit a particular track or place, but to set the atmosphere and tone for the game as a whole.

“The music for Slipstream was composed over the course of development, which was cool in that requirements, inspirations, and references kept changing,” says Stefan. “At first we were really into synthwave/synthpop that was popular around 2009-2015. Then of course Outrun and other classic driving games/sims came into the mix. We eventually trailed into vaporware, eurobeat, jazz fusion, etc… The idea of having a radio playing the music from the car made it pretty easy to imagine the game as an album rather than a soundtrack.” As for media references and inspiration, Stefan says, “I remember the hard hitters like Drive and Outrun, but at the time I remember trying to look really hard at the art, composing to gameplay, and trying to feel invigorated from that. As for other artists, I was listening to a lot of Com Truise, Electric Youth, Jean Luc Ponty, Casiopea, and plenty more at the time .”

With a killer soundtrack and game mechanics that distill classic arcade racers into the modern arena, I hope Slipstream combines nostalgia and challenging gameplay for lots of fun – and it’s available right now on Xbox! 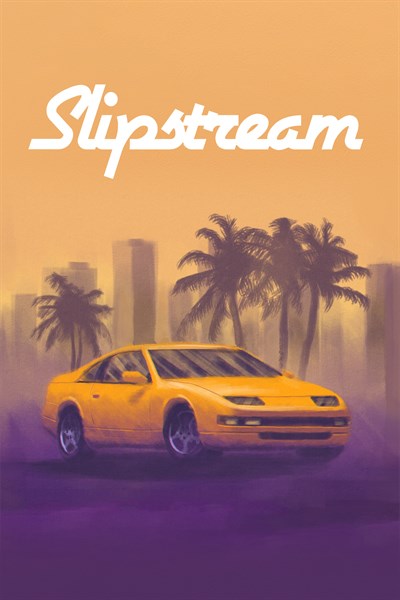 ☆☆☆☆☆ 27
★★★★★
$9.99
Get it now
Slipstream is a racing game inspired by the visuals, music, games and cars from the late 80s and early 90s. It's built with an authentic retro feel and unique graphics. The soundtrack, drawing from synthpop and jazz fusion influences, sets the tone for a race across a variety of exotic locations from all around the world, including cities, deserts, forests, mountains and beaches. Drifting and slipstreaming mechanics add depth to the driving gameplay, and the result is a challenging and exciting experience.