Whether your frame of reference to Arthurian legend is traditional, like the classic novels and films or comical, like Monty Python and the Holy Grail, there’s no doubt that you’ve been exposed to the iconic tale of King Arthur and the Knights of the Round Table in some form or another.

However, Arthur’s tale has been retold so many times over the years, which prompted developer Room-C Games to think about it differently. How could they pay homage to the beloved lore while also putting a new spin on it?

The result is The Hand of Merlin: a tactical, roguelite RPG fusing elements of sci-fi and horror with Arthurian legend.

Our story begins in the years following Arthur’s death. An apocalyptic event known as the Cataclysm threatens to destroy the multiverse, as each world is under siege by the spreading corruption of evil abominations hell-bent on extinguishing every last sun.

After years of imprisonment, Merlin is weak and cannot directly intervene, but retains influence within the mortal world, searching for those who would succeed where Arthur had failed. The rest is up to you. Recruit a party of Heroes and guide them on a perilous journey to take the Grail from Albion to Jerusalem and stop the Cataclysm to save the multiverse from collapse.

Sounds simple enough, right? That’s what I thought at first, too, but was then quickly and unceremoniously wiped out during my first few runs. These enemies are far more savage than any Knights Who Say “Ni!”

However, this is where I really grew to appreciate the game. Yes, it can be a punishing experience at times, but the game rewards players who learn from their mistakes and make adjustments to their strategy. If rushing the enemy leads to a brutal defeat in close combat, you’ll darnn sure try a ranged attack first next time!

I also appreciate that The Hand of Merlin offers several difficulty options, allowing you to settle into the game at your own speed. “Story” is a great place to start for folks new to tactical RPGs and want a more casual experience. For strategy veterans, the difficulty level increases substantially all the way up to Hard Mode ++. Have fun with that!

Whether you’re a diehard strategy player or a newcomer to the genre, The Hand of Merlin delivers a well-crafted story and a satisfying adventure. Are you ready to hold the Grail and save the multiverse?

The Hand of Merlin is available now on the Xbox Store for Xbox One and Xbox Series X|S. We hope you’ll enjoy it, and look forward to hearing your thoughts! 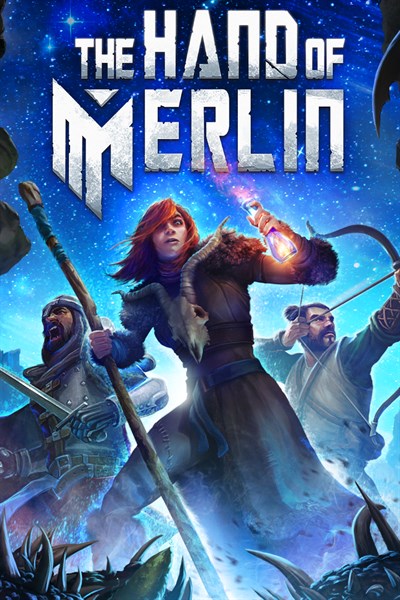 The Hand Of Merlin

☆☆☆☆☆ 12
★★★★★
$29.99
Get it now
The Hand of Merlin is a turn-based rogue-lite RPG in which Arthurian legend clashes with cosmic horror. Recruit a company of up to three mortal heroes and guide them in spirit on a desperate journey from Albion to Jerusalem. Explore a richly-imagined medieval setting on the brink of apocalypse. Trade with merchants, improve your heroes and unearth ancient relics. Search for the lost fragments of your soul, scattered across the multiverse – and save as many worlds as you can. KEY FEATURES: A Roguelike Experience Carve a path across the lands of Albion, Marca Hispanica and Al-Andalus. Will you take a dangerous route, risking life and limb in pursuit of a legendary relic? Or will you choose a safer path? Plan and prepare. Negotiate, barter, fight. Tackle challenges. Suffer losses. Recruit new Heroes. Earn Gold, Supplies and Renown. Be careful: your choices are permanent, as is death. But don't tarry – evil never rests. Tactical Turn-Based Combat Master the tactics of squad-based and turn-based combat to conquer both human and demonic foes. Your enemies will be tough and ruthless; make use of high ground and cover, set up ambushes and coordinated attacks, harness synergies between different Hero classes and skills. Non-Linear Narrative Enjoy a compelling story inspired by Arthurian legend, the Matter of France, and the history of Al-Andalus – with an unusual twist. Make choices in interactive encounters that change every time you play. Written by Jonas Kyratzes (The Talos Principle, Serious Sam 4) and Verena Kyratzes (The Lands of Dream, Serious Sam 4). Hard Mode Suited for only the bravest adventurers. Experience an even greater challenge with complex resource management and tougher enemies. Earn Essence with each run that can be exchanged for Blessings and Curses, adding temporary benefits and burden in equal measure to your next run. Dynamic Leveling Use Renown to level up your Heroes, and choose between a randomized set of new skills or improved attributes. But choose wisely! Select skills with great synergy and balance your party for the road ahead. Equipment Upgrades Seek out towns to improve your arms and armor, or stumble upon hermit artisans in the wild. With every day that passes, the world plunges deeper into darkness, and you will need all the equipment gold can buy. Relics From a peasant's humble luck charm to the legendary sword wielded by Arthur himself, items imbued with magical power are scattered about the world. Some you will be able to purchase from merchants and collectors, but others will have to be earned through acts of heroism – or displays of wit. Spells Rain thunder and brimstone upon your foes! Seek out and gather Soulstones to restore your power and unlock new Spells. Even if defeated, your spirit will retain all of your collected arcane knowledge as you jump into the next dimension. Alternate Dimensions As you jump from one parallel dimension to the next, history is reshaped. Different kings rule the land, changing the encounters, characters, and events. No two worlds are ever quite the same, and each journey will be unique. And should your heroes fall, remember: defeat is not the end, only a new beginning. There are as many worlds as there are stars in the sky. In each stands Camelot; in each there is a Grail. But there is only one Merlin, and his eternal burden is to stand against the horror from beyond. Each world that is saved is saved forever; each world that is lost is lost for good.