Enough is never enough. With the promise of newfound riches, our Tier 1 Operators have split off into mercenary factions with one goal in mind: Get rich or die trying.

Test your mettle in Mercenaries of Fortune, the fourth season of Call of Duty: Vanguard and Call of Duty: Warzone, which brings a new Warzone map, new Multiplayer maps, new weapons, Gun Game, 100 Tiers of Battle Pass content, and the return of classic round-based Zombies in Shi No Numa.

Gear Up With the Battle Pass

Get equipped for the gold-hunting battles ahead with the Mercenaries of Fortune Battle Pass, featuring 100 Tiers of new content, including two new free weapons: the Marco 5 SMG and the UGM-8 LMG.

Purchase the Mercenaries of Fortune Battle Pass to get Task Force Immortal Operator Captain Butcher instantly at Tier 0. Appearing later in the Store are the other two Immortal Operators, Callum Hendry, and Ikenna Olowe.

Earn two more weapons – the Push Dagger and the Vargo-S Assault Rifle – by completing their in-game challenges or by purchasing their corresponding Store Bundles later in the season.

Fortune’s Keep is a mercenary hideout built atop an otherwise peaceful town with a rich history and it’s a completely original Resurgence map created by High Moon Studios. It’s roughly the same size as Rebirth Island and features four distinct points of interest:

Prepare for new challenges, too. Fortune’s Keep adds the Black Market Run Contract, offering the chance to purchase off-market gear like the Sequencer Grenade and the Nebula V Minigun. Track down mercenary groups in Cash Extraction and take their bags of gold before they can offload them from the island.

Storage Town Comes to Caldera: Originally in Verdansk, Storage Town comes to Caldera and is located between the Mines, Airfield, Village, and Dig Site. Search the sprawling complex for Contracts and items and use its newfound verticality to quickly traverse the map. Expect over a dozen other Point of Interest changes across Caldera, partially due to new mercenary camps cropping up. Maybe they’re searching for the rumored Mercenary Vaults?

Armored SUV (In-Season): Hop into the new Armored SUV when you need to travel through enemy-occupied territory. This vehicle features a mounted driver’s weapon, a dedicated rooftop turret seat, the ability to drop proximity mines, and a Nitro Boost for rapid acceleration.

ATMs: Hit up ATMs in Plunder game modes to acquire bags of gold that periodically spawn nearby. Gold will spawn up to a maximum amount.

EMP Grenade: Disable vehicles and disrupt enemy players and AI using the EMP Grenade, a nonlethal tool that creates a short-lived area of effect when it explodes. Affected players are stripped of their HUD information, while vehicles are momentarily powered down.

USS Texas 1945 (Launch): A reimagining of the USS Texas map from Call of Duty: WWII, USS Texas 1945 challenges Operators to fight it out on an offshore battleship. The map is designed for tense long-range engagements on starboard and port and offers plenty of close-quarters action amid its many confined interior locations. Set up on a power point and do your worst.

Desolation (In-Season): Deploy to a Pacific listening post in this small-to-medium-sized map set in a dense village littered with destruction. Large mountains and a vast landscape engulf the environment as you battle around the central building and along its creekside fortifications.

The Return of Gun Game: Gun Game makes its Vanguard debut this season as Blueprint Gun Game, a new variant utilizing various Weapon Blueprints. Be the first Operator to progress through all 18 weapons to win the match. Eliminate an enemy to cycle to the next weapon. Melee an enemy to set them back one weapon and get the final Throwing Knife elimination to secure victory. No Perks, Killstreaks, or custom Loadouts allowed.

Mercenaries of Fortune also brings a fresh season of Ranked Play. Climb the ladder as you battle other competitors and earn new seasonal rewards along the way.

Following its original release in Call of Duty: World at War, the Zombies map Shi No Numa returns in the first classic round-based experience for Vanguard. Team up and survive the swamps in this updated version, featuring new quests, a Wonder Weapon, fresh intel, and more. Experience the map through Vanguard’s unique features like the Altar of Covenants and the Tome of Rituals.

Prepare for all this and more, including the Mercenaries of Fortune event, the Golden Plunder limited-time mode, plus the midseason arrival of two very special action icons, when the new season arrives on June 22 for Xbox One and Xbox Series X|S.

Rise on every front.

☆☆☆☆☆ 4378
★★★★★
Get it now
Welcome to Warzone™, the massive free-to-play combat arena which now features the brand-new map, Caldera. Drop Into Paradise Join forces with your friends and jump into a tropical battleground with up to 150 players. Loot For Rewards Discover supply boxes and complete contracts to build your arsenal and gain a tactical advantage. Battle Across Three Epic Modes Experience aerial combat in 'Vanguard Royale,' tap into the largest arsenal in standard ‘Battle Royale’ or play ‘Plunder’ in a race to earn the most Cash in the match. An Xbox Live Gold subscription is not required to play the Warzone™ game mode. All other online modes still require Xbox Live Gold. For more information, please visit www.callofduty.com. © 2019-2022 Activision Publishing, Inc. ACTIVISION, CALL OF DUTY, MODERN WARFARE, CALL OF DUTY WARZONE and WARZONE are trademarks of Activision Publishing, Inc. All other trademarks and trade names are the properties of their respective owners. 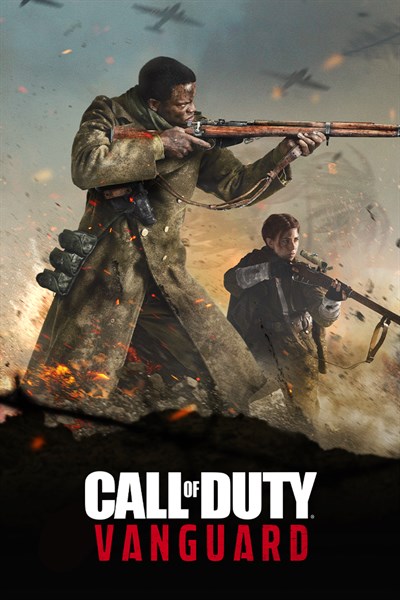 ☆☆☆☆☆ 1183
★★★★★
$59.99
Get it now
Standard edition includes: – Call of Duty®: Vanguard — Includes Xbox One version of game — Plays on Xbox Series X|S via backward compatibility – Digital Exclusive – Frontline Weapons Pack Rise on every front: Dogfight over the Pacific, airdrop over France, defend Stalingrad with a sniper’s precision and blast through advancing forces in North Africa. The Call of Duty® franchise returns with Call of Duty®: Vanguard, developed by Sledgehammer Games, where players will be immersed in visceral WWII combat on an unprecedented global scale. Call of Duty®: Vanguard includes a deeply engaging single player Campaign, a massive launch day Multiplayer offering featuring over 20 maps including 16 built for core Multiplayer and an exciting new Zombies experience developed by Treyarch. Call of Duty®: Vanguard also ushers in a new and unparalleled Call of Duty®: Warzone™ integration, and features cross-progression and cross-generation play, in addition to a massive calendar of free post-launch content that adds in new Multiplayer maps, modes, seasonal events community celebrations and more. For more information, please visit www.callofduty.com. © 2021-2022 Activision Publishing, Inc. ACTIVISION, CALL OF DUTY, CALL OF DUTY VANGUARD, CALL OF DUTY WARZONE, and WARZONE are trademarks of Activision Publishing, Inc. All other trademarks and trade names are the properties of their respective owners. This product contains software technology licensed from Id Software ('Id Technology'). Id Technology © 1999-2022 Id Software, Inc.