Are you excited to watch the 2022 tennis championships in England? Do you wish you could experience what it would be like to compete in a professional tennis championship? Now you can from the comfort of your own home or on the go with Matchpoint – Tennis Championships, available to play today for Xbox One, Xbox Series X|S, Windows PC, and with Xbox Game Pass, PC Game Pass, and Xbox Cloud Gaming.

Kalypso, known for publishing strategy games on multiple platforms, has released its first-ever sports title. This game is a modern take on tennis, offering players a true-to-life on-court experience.

To begin, you’ll create your 3D tennis star. Besides customizing your look, you’ll also have access to a variety of rackets, clothing, and other gear from tennis name brands like Babolat, Yonex, Head, and more. You’ll also unlock special equipment as you progress and win competitive matches.

Beyond looks, you can customize your play style and techniques, including left-or right-handed, one-handed, or two-handed backhand, for a realistic playing experience.

As you play, you’ll master all the strokes and shots so you can choose the best technique for each rally. You can also study your rival’s moves, get to know their strengths and weaknesses, gaining a tactical advantage before you even pick a racket.

Play against the pros

Once you’ve customized your player, you can test your skills against tennis pros. The game features 16 real-life international tennis stars from the professional circuit, including Nick Kyrgios, Kei Nishikori, Amanda Anisimova, and two retired legends, Tommy Haas and Tim Henman.

You’ll go racket-to-racket with the pros as you compete in 65 tournaments across 26 stadiums around the globe. Each court has its own characteristics, so to succeed, you’ll need to study the arena and adapt your play style to grass, clay, and hard court, just like in real life.

Play with a friend

With the ability to take on opponents in local or online matches, you can double the fun by inviting a friend to play against you. One of the most advantageous features of Matchpoint is cross-platform gaming. If you prefer playing on your PC and your friend enjoys gaming on their Xbox, you can still hit the court together.

In between matches, take advantage of the in-game coaching system and individual training modules to improve your strengths and diminish your weaknesses. You can also expand your tactics and skills with various entertaining mini-games. 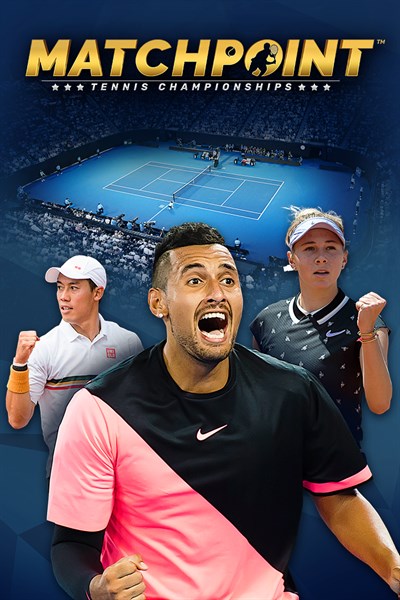 ☆☆☆☆☆ 222
★★★★★
$49.99 $37.49
Get it now
Xbox Game Pass
The season starts now – grab your racket and become the world’s next tennis champion! Your opponent is on the court and the crowd waits for a promising challenger for the grand finale… Are you ready for Matchpoint? Matchpoint – Tennis Championships is a modern take on tennis, featuring a true-to-life on-court experience supported by a deep career mode and unique rivalry system. The game places a strong focus on tactical realism, positioning and aiming, allowing the player to move their superstar in exactly the right way to get the most out of their shots. Matchpoint – Tennis Championships combines slick character animations, authentic ball physics and enhanced player control to replicate the realistic rhythm of the game – every swing and hit feeling unique and satisfying. Features: • Enter the world of professional Tennis: “Matchpoint – Tennis Championships” offers a deep career mode featuring a unique merit-based ranking system. • Create your own 3D tennis star. Choose your look, fashion and play style with an array of customization options including true to life techniques such as left-or right-handed, onehanded or twohanded backhand. • Dominate the court as a tennis professional. The game features 16 real-life international tennis stars from the professional circuit, like Nick Kyrgios, Kei Nishikori or Amanda Anisimova, including their gear from brands such as Nike, Yonex, Babolat and many more! • Customize your athlete and wearables. From rackets to clothing, create your own tennis star and unlock special equipment by winning competitive matches. • Master all strokes and shots in grand style. Determine the outcome of a rally by choosing the best technique for the time: top spin, flat, lob or slice shot. • Take on opponents in local or online matches. Play against a cunning AI or face your friends and rivals on the court via local sessions and online cross-play. • Study your rival’s moves and tactics. Watch your opponents and get to know their strengths and weaknesses to gain a tactical advantage before you even hit the court. • Practice makes perfect: hire a personal coach to hone your skills. Buff your strengths and diminish your weaknesses with an in-game coaching system of individual training modules. • Fine-tune your tactics in Practice and Mini-Game modes: Jump into a variety of mini-games to hone your perfect game and become a force to be reckoned with on the court. • Compete in exhibition matches at spectacular venues around the globe. Each court has its own characteristics; study your arenas of play and adapt your game to grass, clay and hard courts. • Replay mode. Breakpoint or deciding match point, capture your fiercest rallies on film and study the outcomes to improve your game.