If I could do it, anyone can! Not that I’d recommend it. It was a tough journey. Let me share a story about how Robo Revenge Squad came to be.

So this is Robo Revenge Squad. It’s a co-op twin-stick shooter (or brawler, if you choose melee weapons). I made it with a couple of my friends. We had had experience in gamedev, but quite frankly I’d say this is our first project.

It’s a game we wanted to play together. You create your own combat robo out of everyday items and then duke it out in different missions within separate campaigns.

We created a playable version and got some funding, and then we launched it in early access on PC, where we got some cool feedback. Years later, and we finally have the full version, and not just on PC, but on consoles, with gameplay for one to four players!

Our inspirations were many and I can’t pinpoint anything specific. We simply like the retro futuristic style of 1950s’ Americana mixed with sci-fi. You can see some resemblance between the look of the everyday items that make our robos, and 1950s household items as advertised back in the day.

One thing that comes to mind as an obvious inspiration is the style of Pixar movies, especially Wall-E. Sure, we saw it and we loved it, but it wouldn’t be right to say it was a major inspiration for us. Maybe subconsciously.

Anyway, we’re here with a game that has its own charm and soul! It’s our Robo Revenge Squad… which wasn’t always known under this title. It used to be Second Hand: Frankie’s Revenge. Why? Because the combat robos are all named Frankie. We changed it for something with more punch.

Can you quit your job and make a game? You can. It’s gonna be hard. It’s gonna be risky. Is it worth it? Let’s hope so. I really hope you enjoy it, because this is the best any game developer can count on.

Thanks for your time! If you like what you see, check out Robo Revenge Squad on Xbox today. 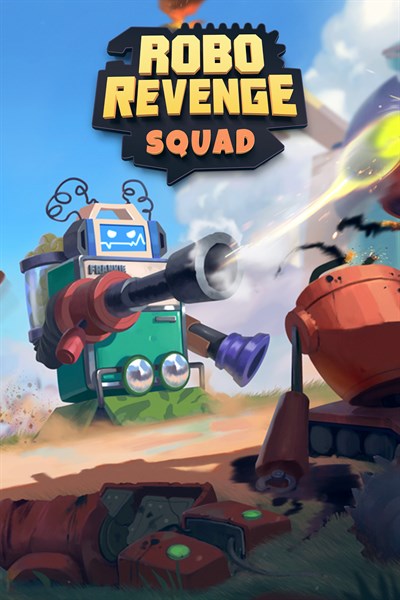 ☆☆☆☆☆ 3
★★★★★
$19.99
Get it now
Robo Revenge Squad is a co-op action game for 1-4 players, where everything is a weapon. Fight alien robots using Robos made of everyday objects: fridges, disco balls, baseball bats, and more! Your mission: kick metal butts Deploy to the mission area and reach your target. Sounds easy? There are big bad aliens along the way, and their bigger, badder bosses. There are puzzles and special objectives, from cranking carts to demolishing doom towers. And you also have to evacuate! Meet a worthy challenge in mission-based campaigns that end with boss encounters. Arm up and find your playstyle Do you prefer melee or ranged combat? Will you rely on basic attacks or special moves? Are you a defensive player, or a Leeroy Jenkins? Decide and jump straight into the action, solo or with friends. Wreck hundreds of enemies. Deactivate force fields. Set up explosives. Or even go… fishing?! Do everything it takes to liberate the planet. And don’t forget to evacuate once your mission is complete! Unlock tons of parts & cosmetics Put the style in playstyle! Level up and unlock TONS of new gadgets, from weapons to special devices to cosmetics. Make your Robo yours, and only yours. Unlock new stuff for being a fighter, not for microtran– Bleh! We won’t even use that word here. TL;DR: Just. Have. Fun!