Oh good, you’re here, brawler. Welcome to Knockout City! So you’ve heard a little somethin’ about this team-based action game of dodgebrawlin’ and you want to get started? Well, you’re in the right place. I’m here to give you the lowdown on everything new coming in Season 7: Mutant Mutiny!

Now, let’s get down to business. Knockout City is a game of skill, where players crew up and duke it out in epic dodgebrawl battles throughout the city. But recently, something strange is afoot. Let’s check it out!

There’s a pizza party happening in the Hideout, and you’re invited! Grab a slice before these dudes gobble down the last one. Leonardo, Raphael, Michelangelo, and Donatello are ready to take up arms alongside our mutant brethren as they fight for their rightful place in Knockout City. And they’re just in time.

With the launch of Season 7: Mutant Mutiny!, you’ll be able to become your favorite Turtle in any dodgebrawl match. Each character comes with their own totally tubular Intro Pose so you can head into each match in character.

You’ll find all four Turtles and their Legendary Intro Poses in the Teenage Mutant Ninja Turtles bundle in the Brawl Shop! Score it for just $19.99.

When the bonks and boinks of dodgeball battles die down, listen closely and you’ll hear muffled growls and strange bubbling rising from deep below the city. Our new mutant friends have arrived, and they aren’t going to sit quietly any longer. They’re ready to take on the opposition and claim their rightful place – right here, alongside us. If you’re going to brawl with these fearsome folks, you might want to know a little more about who they are and where they came from.

It’s hard to miss the leader of these rowdy revolutionaries, with his glowing skin and luminous  personality. Neon isn’t just a flicker of hope, he’s the whole dang lighthouse for all those mutants on a mission. But don’t mistake his passion for youthful ignorance, he just might outsmart you.

You ever wish you could tell someone where to stuff that dodgeball? Well, chances are, Susan has. She’s a no-nonsense, trash talkin’… crocogator. If Neon can’t inspire sense into folks, Susan’s here to pummel it into ‘em.

You got somethin’ that needs doin’? If you’ve got the cheddar, Ratfink’s on the case. He’ll lend you a hand, but you ain’t gonna walk all over him – better respect the skills. He’s got the 411 on what it’s gonna take to win, and the gab to back it up.

Have you ever wanted to know what a Gelatinous Cube would sound like if you gave it sentience? Well, meet Goober. We’re not really sure how Goober came to be, and if you’re not a mutant, chances are you’re gonna have a pretty hard time understanding his gurbles and worbles. Still, with his can-do personality and disarming/unconventional charm, he’s a pretty great… goo… to have on your team.

Whether you’re heading out onto the battlefield as an ambitious, glowing brawler, a half-shell hero, or a gooey crew mate, you’re gonna want to watch where you’re walkin’ because this brand-new map is going to keep you on your toes.

Has anyone notified the EPA about this… goopy substance that’s out here being dumped near the Boba Cola plant? While we wait for them to arrive, feel free to explore – it appears the sludge is safe to walk on. Until it isn’t, anyway. The pipe in the center of the map will dump sludge that will slowly alter the entire landscape of the level, filling open spaces, covering up or obscuring hazards, and blocking off pathways and creating new ones to your enemies.

Then, just as quickly as it appeared, an alarm will sound and the sludge will flush away in an instant! Careful where you’re standing at the time of evacuation, or you’ll find yourself thrown out with the trash, as you plunge deep into a pit.

Whether you’re brand new to the game or a seasoned brawler, you’ll want to check out everything Season 7 has to offer.  But our green friends over there didn’t get to be a fearsome fighting team without practice. If you want to brawl with the best of ’em, you’ve got to get down to business. So listen up.

Grab a friend, or make one, because brawlin’ in Knockout City is all about teamwork. Just like our heroes in a half-shell here, you’re gonna have to work together to make sure you’re the best you can be. That means spending a little time in the Hideout practicing your throwing and catching before you run out there and get destroyed faster than these four chow down a slice of ‘za.

You’ll find the Training Bot in the Hideout, so stop by and run through the trainings – which will also score you some easy Holobux to spend in the Brawl Shop. Then, see if you can best the T.A.R.G.E.T. dummy a few times and nail your perfect catches. Finally, check out our advanced guides on YouTube, stay up to date with the blogs on KnockoutCity.com, join our official Discord community, and toss some Bits to your favorite Knockout City Creator Crew member on Twitch, and ask them for their favorite tips and tricks. You’re gonna need ‘em.

Lastly, tune in today, August 25th at 2:30pm PT / 5:30pm ET for our Dev Stream on Twitch.tv/KnockoutCity for gameplay and an exclusive chat with our Narrative Director, Eric!

Thanks for reading! Last one in the sludge grows an extra foot! 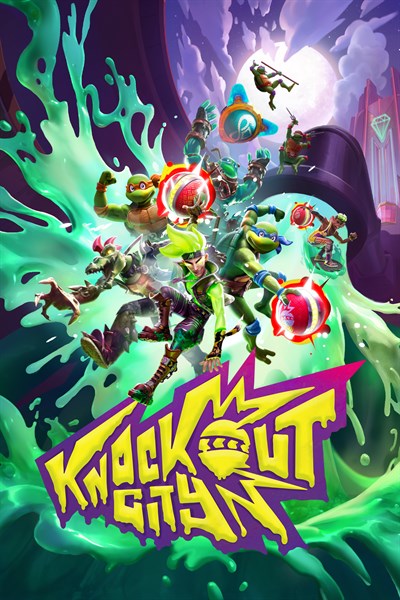 ☆☆☆☆☆ 345
★★★★★
Get it now
Knockout City is now Free-to-Play, inviting brawlers everywhere to experience the frantic, non-stop action of dodgebrawl. Optimized for Xbox Series X|S. Knockout City™ leverages Xbox Smart Delivery allowing access to both the Xbox One title and Xbox Series X|S title. Support.xbox.com KEY FEATURES: • Frantic and Fun — Rule the city through lightning-fast multiplayer matches featuring mind-blowing dodgeball mechanics. Increase your attack by passing to power up dodgeballs, targeting your opponents with a variety of specialized balls, or “balling up” at any time to get thrown by teammates! • Crew Up — Assemble an All-Star dodgeball Crew with your friends for multiplayer matches in a seamless cross-play experience! Together, knock out opponents in 3v3, 4v4, or free-for-all matches. Pass, throw, and strategize to dominate as a team and unlock distinctive, Crew-only rewards! • Define Your Style — Show off your status and unique look through character and Crew designs with expansive character creation options. Customize your appearance, gear, and attitude, from body type and hairstyle to a custom glider and Crew vehicle to win, lose, and taunt animations. • Take On Knockout City — Battle it out with other Crews across dynamic maps all over the city. Each map’s special features make every match an intense, unexpected experience. Dodgeball thrives in back alleys with pneumatic tubes, on skyscraper rooftops, across busy streets—and even at the local burger joint and construction sites. While you’re dodging dodgeballs, watch out for moving cars, rooftop drops, and even a wrecking ball or two. • Strikingly Fresh Yet Familiar — It’s easy to pick up and play thanks to familiar controls, but practice is key to becoming a champion. On a level playing field, only the most skilled ballers stand out from the crowd. Use your knowledge to master the intricacies of the game for spectacular KOs. Holobux you purchase from the Microsoft Store can't be transferred to or used on other platforms. Limited free trial capped at level 25. Trial is subject to change. Internet connection, EA account and acceptance of EA User Agreement (terms.ea.com) & Privacy and Cookie Policy (privacy.ea.com) required to play. Trial can be played once per EA account. CONDITIONS AND RESTRICTIONS APPLY. SEE WWW.EA.COM/LEGAL FOR DETAILS. © 2021 Velan Studio, Inc. EA and the EA logo are trademarks of Electronic Arts Inc. Trademarks are the property of their respective owners. Buy the Xbox Series X|S version and get the Xbox One version (Digital Standard or Deluxe Editions) for no additional cost. ©2022 Viacom International Inc. All Rights Reserved. Nickelodeon, Teenage Mutant Ninja Turtles and all related titles, logos and characters are trademarks of Viacom International Inc.