In Conan Exiles, you must survive the savage Exiled Lands, explore dark ruins that echo with death, and develop your shelter into a mighty fortress to dominate your enemies in single player, co-op, or multiplayer.

With today’s free update, the largest one since launch, we add something integral to the universe of Conan the Barbarian: Sorcery. The Age of Sorcery also adds a comprehensive overhaul to attributes and perks, as well as a brand-new building interface and Creative Mode that makes building easier than ever, especially on a controller.

To celebrate this huge milestone, Conan Exiles will be free to try from September 8-11, even if you don’t have Game Pass.

Start your journey into the darkness, learning sorceries, performing sacrifices, and corrupting your life force. Read on to discover what awaits you on this dark path, and what makes sorcery in Conan Exiles so different.

A Darker Shade of Magic

Sorcery in Conan Exiles is not your traditional high-fantasy magic. It’s an insidious, creeping affair, requiring sacrifice, preparation, and a pinch of madness. Our goal from the start has been to balance authenticity to Robert E. Howard’s stories with fun and satisfying gameplay.

Rather than shoot your enemies with fireballs, you will conjure thick darkness to terrify them. With the power of sacrificial blood, hulking demons will bend to your will after you’ve torn them from their realm and into yours. But beware, for every time you seize sorcery from the darkness, a little of it flows into you, corrupting your life force.

The more corrupted you become, the less health and stamina you will have, and more withered your body will appear, with a skein of black veins wriggling across your skin. This is the cost of sorcery. But corruption brings rewards, too. Some spells require a certain amount of corruption to be cast, so to be a master of all sorcery, you must sacrifice more.

Your strength, vitality, and authority attributes can be infused with corruption, giving you access to powerful corruption perks if you invest enough, and the first corruption perk you get in each of these attributes will grow stronger the more you corrupt the attribute.

Rituals are the crafting element of sorcery that require preparation and the correct circumstances. Construct a sacrificial stone to draw blood from thralls, then use that blood at your summoning circle to bring forth demonic armor and weapons.

Sorcerers are known and feared for the apparent ability to be in many places at once. With the new sorcery crafting stations, you can teleport between portals that you’ve set up across the Exiled Lands. You can also summon a winged monstrosity to carry you across the sky.

A New Age of Conan Exiles

With all these changes, exploring and surviving the Exiled Lands is more exciting than ever. The new dynamics and interactions that sorcery adds will make for unforgettable encounters between players that we can’t wait to witness.

It’s a new age for Conan Exiles, and we can’t wait to continue expanding the game.

Conan Exiles and the Age of Sorcery Update are available now with Xbox Game Pass, and will be free to try from August 8-11. Get the latest news and join the community on the official website, Twitter, and Facebook. 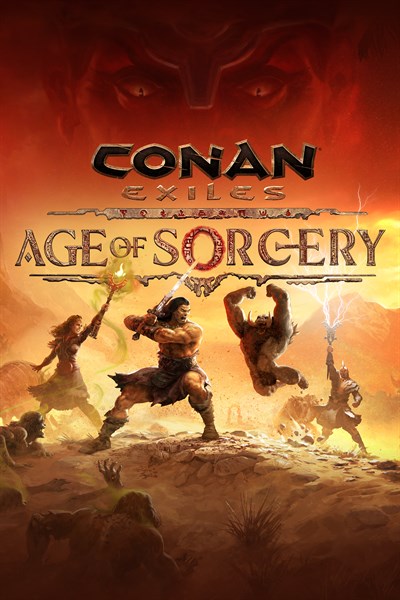 ☆☆☆☆☆ 450
★★★★★
$49.99 $39.99
Get it now
Xbox One X Enhanced
PC Game Pass
Xbox Game Pass
Conan Exiles is an online multiplayer survival game, now with sorcery, set in the lands of Conan the Barbarian. Enter a vast, open-world sandbox and play together with friends and strangers as you build your own home or even a shared city. Survive freezing cold temperatures, explore loot-filled dungeons, develop your character from scavenging survivor to mighty barbarian and powerful sorcerer, and fight to dominate your enemies in epic siege wars. Conan Exiles can be played in full single-player, co-op, or persistent online multiplayer. SURVIVE IN A SAVAGE LAND Dress well or light a campfire to stay warm and make sure to cool yourself down in the heat. Hunt, cook, eat, and drink to stay alive. Build a shelter to weather scouring sandstorms. Be careful when exploring darkened ruins or you might become corrupted by foul sorcery. BUILD A HOME AND A KINGDOM Harvest resources to craft tools and weapons, then build anything from a small home to entire cities piece by piece using a powerful building system. Place traps, elevators, and defenses, then deck out your creations with furniture, crafting stations, and more. DOMINATE THE EXILED LANDS Carve out your piece of the Exiled Lands, taking it from other players if you must! Build siege weapons and use explosives to break down the walls of your enemy’s city. Place traps, recruit thralls, and build defenses to keep your enemies from invading you. CORRUPT YOURSELF TO WIELD DARK SORCERY Discover insidious sorceries and corrupt your body to wield them. Special perks are awarded to those who give up a portion of their life force. Sacrifice thralls to summon demons and the undead and bend them to your will. Conjure darkness, soar the skies on winged monstrosities, and call down lightning to strike your foes. AGES ARRIVE IN THE EXILES LANDS Updates in Conan Exiles now come in Ages. Each Age has its own theme, free gameplay updates, and Battle Passes. This model allows us to add features and improvements for free, while providing an easy way for any player to support the game’s growth and receive exclusive themed cosmetics. EXPLORE A VAST, OPEN WORLD Journey through a massive and seamless open world, from the rolling sand dunes of the southern desert to the mysterious eastern swamp and the snow-capped mountains of the frozen north. Climb anywhere and experience full freedom of exploration. BRUTAL, BLOODY COMBAT Fight vicious monsters and other players using an action-oriented, combo-based combat system. Dodge, block, and learn to master the true art of combat to become the greatest fighter in the Exiled Lands. Slay using bows, daggers, swords, axes, and more.