Hey everyone! Our rhythm FPS, Metal: Hellsinger, releases very soon on September 15 for Xbox Series X|S and will be available on day one with Game Pass. Before that happens and we let you all loose on Hell’s demonic hordes, we’d like to share what we think makes Metal: Hellsinger a uniquely intense experience, and how we got to where we are now.

In Metal: Hellsinger you embark on an infernal journey of revenge through the eight Hells. Most basic actions are performed to the beat, so when you shoot, dash, or perform finishers on rhythm. This contributes to your “fury” multiplier. The higher your multiplier, the more intense the music becomes and the more damage you deal, and at maximum fury, the vocals kick in for the full metal experience.

A range of wicked weaponry mixes up the way you interact with the beat. For example, the shotgun lets you eradicate demons with heavy half note finality, while the dual pistols dispatch enemies at a quick quarter note staccato. Each weapon also has an ultimate ability, mixing things up further, giving you an even wider range of options in how you want to play. Even dashing and reloading have their own importance in your symphony of destruction.

You Drive the Music

While the music itself beats at the heart of the game, and we feel privileged to have an incredible original OST performed by legendary metal artists, it’s you who powers the whole infernal machine.

In Metal: Hellsinger you drive the song, not the other way around. The purpose of this is to make you feel more connected to your performance, the game world, and the music. Everything flows from the rhythmic impact of demons hitting the ground to your relentless advance. You are the song incarnate. You fuel the metal, and the metal fuels you.

The Beat Goes On

Playing the game ourselves, we’ve noticed something peculiar. A visit to the studio kitchen reveals developers punching in their coffee machine selection to an imaginary beat in their head. From my desk, I hear the clicking and typing of colleagues in rhythm to a beat that doesn’t exist.

The rhythm of the game kind of just … persists. Walking around throughout the day I find myself unconsciously continuing the metronome or humming favorite bits of the song I just played. We hope the same thing happens to others, this sort of musical hypnosis that flow and rhythmic play induce.

While we know the game is unusual in its own right, there was never a meeting where everyone sat down and thought, “How do we make this different from other games?” We took elements of games that we loved and combined them. Shooters, metal music, and rhythm games, with the conceptual notion of making this game about a demon fighting her way out of Hell.

Some people on the team had made shooters before and many of us had listened to a hell of a lot of metal, but a rhythm game combining all these things was new ground, so there was a lot of exploration and simply figuring out what worked for us and what felt good to play.

We focused on the shooter aspects and balanced them against what we believed would be rewarding rhythmic gameplay. In a game all about timing and flow, we knew everything needed to be extremely precise and responsive. When the player performed well, they needed to know it. Our solution: when you reach the full score multiplier, screaming vocals punch your ears through the screen. But in a good way.

Getting the feedback right for actions on and off-beat, the scoring structure, making the UI feel integrated into the experience, all this was a long process of back and forth.

Each level in the game, a slice of Hell, is set to a song that has been shaped into a layered and reactive soundtrack. The level selection screen resembles a series of records, and in the deepest pit of Hell awaits the final showdown with the Red Judge, set to “No Tomorrow” performed by Serj Tankian from System of a Down. The result – we hope – is a game that feels like playing a metal album come to life.

We hope you have a blast playing Metal: Hellsinger when it releases on September 15 for Xbox Series X|S and day one with Xbox Game Pass. 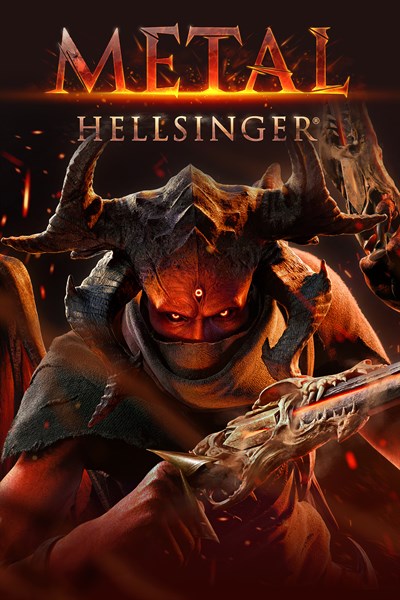 ☆☆☆☆☆ 192
★★★★★
$39.99
Get it now
PC Game Pass
Xbox Game Pass
Demo available now! Search for it on the store. Part human, part demon, and obsessed with vengeance. Become The Unknown, and fight through the fiercest domains of Hell. Destroy the demon hordes and their leaders to set yourself up for an epic showdown with The Red Judge herself. Every legend has a song. And yours is one of metal, vengeance, and destruction. Slay to the beat Metal: Hellsinger is a rhythm FPS, where your ability to shoot on the beat will enhance your gameplay experience. The more in sync you are with the rhythm, the more intense the music will become and the more destruction you will cause. Demonic arsenal Defeat the demon hordes with a skull-clad blade or a wide range of murderous guns. Each weapon has its own ultimate ability, such as Murder of Crows or The Big Goodbye. Epic story and Challenge Mode Play through an epic storyline, narrated by award-winning actor Troy Baker. Unlock special challenges and conquer the realms of Torment to become more powerful in the stages and get a leg up on the leaderboards. Fight through fire, ice, metal and madness Although commonly known as Hell, The Infernal Planes is in reality a union of a thousand Hells, all of which are terrifying and diabolical in their own way. In order to dethrone The Red Judge, you must fight your way through the fiercest corners, from the icy world of Voke to the maddening world of Stygia. From the Lead Designer of Battlefield: Bad Company 2 Metal: Hellsinger is created by an experienced FPS team at The Outsiders and is the passion project of David Goldfarb, Game Director on Payday 2 and Lead Designer on Battlefield 3 and Battlefield: Bad Company 2. Original metal soundtrack Every track has been created specifically for the game by composer duo Two Feathers, with vocals by metal icons such as Serj Tankian (System of a Down), Randy Blythe (Lamb of God), Alissa White-Gluz (Arch Enemy), and many more! DMCA and Copyright Information: We fully own the songs as they are specifically written, produced and performed for the game. For content creators, we have done everything from our side to make sure strikes won't happen.