Ready to explore the Star Wars galaxy like never before? Gather with your family and friends, because LEGO Star Wars: The Skywalker Saga will be available on Game Pass just in time for the holidays. If you’ve ever dreamed of teaming up with your siblings for lightsaber battles or experiencing space combat with your next-door neighbor, now is your chance with LEGO Star Wars: The Skywalker Saga via two-player local co-op gameplay! Whether you are new to the franchise or a longtime fan, this fun and accessible family friendly game can be played and downloaded starting December 6 for all Game Pass subscribers.

Through the humor of LEGO, you will relive the epic narrative of The Skywalker Saga and can choose to start at the beginning of any trilogy, including Star Wars: The Phantom Menace, Star Wars: A New Hope, or Star Wars: The Force Awakens. Fight against the forces of evil as your favorite characters, such as Luke Skywalker, Rey, Obi-Wan Kenobi, Finn, BB-8, and a legion of other heroes. LEGO Star Wars: The Skywalker Saga contains over 300 unlockable characters from all nine films to create fun, new adventures. With more than 100 vehicles to command, you can jump to lightspeed in the Millennium Falcon to outrun Imperial starships and board and explore capital ships like the Super Star Destroyer! With immersive combat mechanics, show off your Jedi skills to your friends as you wield lightsabers, fire blasters, and chain different attacks with the greatest legends from every era of the Skywalker Saga.

Playing LEGO Star Wars: The Skywalker Saga with your family and friends and exploring the vastness of the Star Wars galaxy with 23 planets to discover as you visit Cloud City on Bespin or Ewok Village on Endor is just one of the many highlights when playing the game. Join forces and create new memories together as you traverse iconic locales.

The galaxy is yours, starting December 6! Download LEGO Star Wars: The Skywalker Saga on Game Pass, choose your starting point and get ready to enjoy the game millions of fans from around the world can’t get enough of! 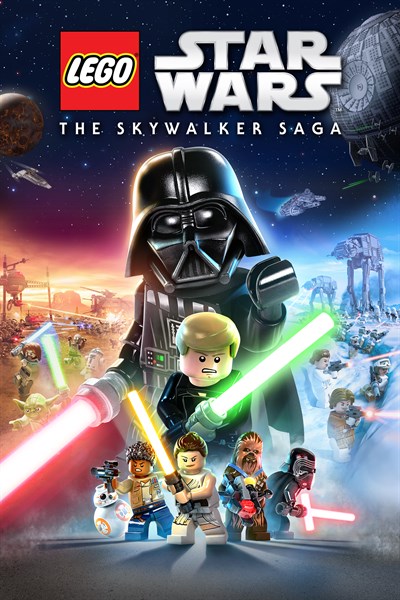 ☆☆☆☆☆ 1165
★★★★★
$59.99 $47.99
Get it now
The galaxy is yours in LEGO® Star Wars™: The Skywalker Saga. Experience memorable moments and nonstop action from all nine Skywalker saga films reimagined with signature LEGO humor. Purchasers of the digital edition receive an exclusive classic Obi-Wan Kenobi playable character. ● Explore the Trilogies in Any Order – Players will relive the epic story of all nine films in the Skywalker Saga, and it all starts with picking the trilogy of their choice to begin the journey. ● Play as Iconic Heroes and Villains –More than 300 playable characters from throughout the galaxy. ● Discover Legendary Locales – Players can visit well known locales from their favorite Skywalker saga films .They can unlock and have the freedom to seamlessly travel to 23 planets as they play through the saga or explore and discover exciting quests. ● Command Powerful Vehicles – More than 100 vehicles from across the galaxy to command. Join dogfights and defeat capital ships like the Super Star Destroyer that can be boarded and explored. ● Immersive Player Experiences – String attacks together to form combo chains and fend off oncoming attacks. New blaster controls and mechanics allow players to aim with precision, or utilize the skills of a Jedi by wielding a lightsaber and using the power of The Force. ● Upgradable Character Abilities – Exploration rewards players as they uncover Kyber Bricks which unlock new features and upgraded abilities across a range of character classes, including Jedi, Hero, Dark Side, Villain, Scavenger, Scoundrel, Bounty Hunter, Astromech Droid, and Protocol Droid.