“Jurassic World Dominion” roared onto cinema screens earlier this year, captivating audiences with incredible moments, gorgeous locations, and spectacular dinosaurs. That’s exactly what we’re aiming to do for players with Jurassic World Evolution 2: Dominion Malta Expansion, the latest DLC for our immersive management simulation. Featuring four all-new prehistoric species, four additional skins and variants, and a thrilling new campaign set across a sun-drenched Mediterranean setting. And you can play it on Xbox One and Xbox Series X|S right now.

We’re transporting you to the warmth and wonder of Malta to take on an entirely new campaign mode. Set before the dramatic events of Universal Pictures and Amblin Entertainment’s “Jurassic World Dominion”, you can find work alongside key figures including Kayla Watts (voiced by DeWanda Wise), Soyona Santos (voiced by Dichen Lachman), Barry Sembène (voiced by Omar Sy), and Lewis Dodgson (voiced by Campbell Scott), as you team with Cabot Finch to establish brand new parks across three Mediterranean locations.

With Jurassic World Evolution 2: Dominion Malta Expansion, we’ve strived to make a true companion piece to the film while building on it in new and exciting ways. For example, in the DLC you can make use of our new mechanic: the dinosaur exchange. Whenever you want to acquire more species, eggs, and even genome data, you can get them from the dinosaur exchange. Be warned, however, that not every listing on the exchange will arrive exactly as you’d expect.

As well as the dinosaur exchange, new organizations are an additional feature of the DLC. You’ll work with both the Underground and Authorities, building trust with these organizations by completing contracts to unlock further opportunities for your parks. These range from hatchery upgrades that make managing your park simpler to additional locations in which to build more facilities. With the Authorities and the Underground both taking a keen interest in your operation across the area, who you choose to align with opens up new and different ways to develop your parks.

We’ve aimed to make your influence in Malta matter. Rather than building the perfect park in isolation then moving on to the next one, progress is persistent across all three locations. You can switch between your islands once unlocked, whether you want to attend to urgent matters, do some dinosaur dealings, or simply spruce up one of the enclosures. There’s even the addition of a cargo ship at your disposal, so you can transport dinosaurs across the sea. That crowd-drawing Carnotaurus doesn’t have to stay in one spot anymore – you can take it with you.

We’ve also added an entirely new range of buildings inspired by “Jurassic World Dominion”. These include the Acquisition Center, viewing gallery, and hotel, which all fit right in thematically with their new Malta surroundings. Plus, you can seat your ranger, MVU, and capture teams in new-style vehicles, and even add fresh decorations to make your parks stand out. One of my favorite touches on one of the islands is the natural lagoon, an organic feature of the landscape, which you can actually house your marine species in. Rather than constructing an artificial marine habitat yourself, try taking advantage of this beautiful bay. All Malta buildings are available to use in sandbox mode.

Of course, the expansion also features a host of new dinosaurs as seen in “Jurassic World Dominion”, each one looking and behaving just as they did in the film. We’ll start with the infamous Atrociraptor, which resembles a bulkier and even more dangerous Velociraptor. In addition to a host of skin color options, it also comes with four skins from the movie: Red, Ghost, Tiger, and Panthera.

There’s the distinctive Lystrosaurus, a short, squat herbivore bearing both a horned beak and tusks. I love that we’ve included this peculiar little guy, and I recommend feeding it all the vegetation it wants, because it deserves it. We’ve also got the colourfully feathered Oviraptor, who stands out with its magnificent plumage, and the diminutive Moros Intrepidus, quick and nimble carnivorous cousin of the mighty T. rex.

But that’s not all. We also wanted to add even more appeal to the existing roster, and in Jurassic World Evolution 2: Dominion Malta Expansion, you’ll find stunning new film-inspired skin and variants. Pick new-look models for your Iguanodon, Allosaurus, and Dimorphodon, and give your Carnotaurus a scarred skin, capturing how they appear in “Jurassic World Dominion”.

We’ve put so much love into Jurassic World Evolution 2: Dominion Malta Expansion, and we’re so excited for you to play it. New challenges and exciting opportunities await in Malta!

Jurassic World Evolution 2: Dominion Malta Expansion is out now on Xbox Series X|S and Xbox One (requires Jurassic Evolution 2 base game to play). 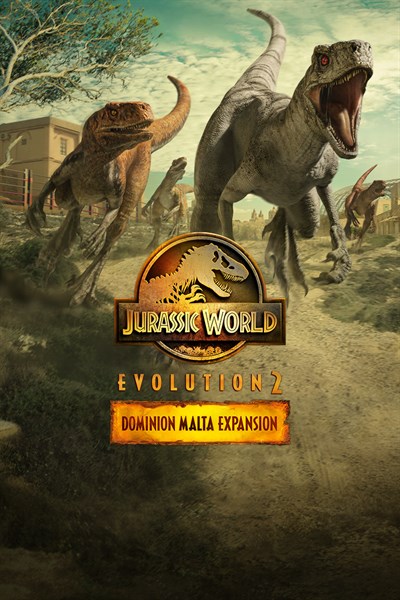 ☆☆☆☆☆ 44
★★★★★
$19.99 $17.99
Get it now
Set before the dramatic events of Universal Pictures and Amblin Entertainment’s Jurassic World Dominion, you’ll head to the warmth of the Mediterranean and attempt to manage multiple dinosaur facilities across three locations. Discover spectacular new prehistoric species, three new islands, detailed Malta-inspired buildings, and an all-new campaign in Jurassic World Evolution 2: Dominion Malta Expansion. NEW CAMPAIGN EXPERIENCE Before the events of Jurassic World Dominion, help lead a brand new enterprise in Malta. Work alongside Cabot Finch and key figures from the film, including Kayla Watts (voiced by DeWanda Wise), Soyona Santos (voiced by Dichen Lachman), Barry Sembène (voiced by Omar Sy), and Lewis Dodgson (voiced by Campbell Scott) as you set up parks across three Mediterranean locations. Establish key buildings, and trade on the dinosaur exchange to acquire more species, eggs, and even genome data. Work with both the Underground and Authorities and build trust with these organisations via various actions to unlock further opportunities such as, hatchery upgrades, locations and more. NEW LOCATIONS AND BUILDINGS Create all-new parks containing a range of exciting buildings with a film-inspired theme, including the new Acquisition Centre, viewing gallery, hotel, and more. Seat your ranger, MVU, and capture teams in new-style vehicles, and add fresh decorations to make your parks stand out. Build across three new locations set in the Mediterranean, one of which boasts a natural lagoon. All Malta buildings are available to use in sandbox mode. NEW PREHISTORIC SPECIES AND SKINS Host four captivating dinosaurs as seen in Jurassic World Dominion. Faithfully created to mirror their film counterparts, these iconic prehistoric species are ready to give guests an unforgettable experience. Furthermore, Jurassic World Evolution 2: Dominion Malta Expansion features stunning new variants of existing species and additional film skins, so you can give your dinosaurs a bold new look with different patterns and colours. The pack contains: NEW DINOSAURS Atrociraptor (with 4x movie ‘squad’ skins) Arguably even more dangerous than its velociraptor cousins, the Atrociraptor has a bulkier body and boxier snout. The coloration varies wildly between individuals. Lystrosaurus A short, squat herbivore with powerful forelimbs and an unusually shaped skull that lived around 250 million years ago. The Lystrosaurus is notable for its tusks and horned beak, used to bite bits of vegetation. Oviraptor A smaller predator with a distinctive head crest, the Oviraptor has a unique feathered look. Originally believed to steal eggs of other dinosaurs, it was dubbed the ‘Egg Thief’, but it has since been understood to be an omnivore with a powerful jaw for its size. Moros Intrepidus A diminutive carnivore and one of the smallest Tyrannosauroids to have ever existed, the Moros Intrepidus is only a fraction of the size of its famous relative, the T. rex. Despite its short stature, it is known to be a quick and nimble hunter. NEW DINOSAUR VARIANTS inspired by Jurassic World Dominion. Iguanodon 2022 Allosaurus 2022 Dimorphodon 2022 NEW SKIN Carnotaurus 2022 (scarred)

☆☆☆☆☆ 148
★★★★★
$59.99 $47.99
Get it now
PC Game Pass
Xbox Game Pass
Jurassic World Evolution 2 is the much-anticipated sequel to Frontier’s ground-breaking 2018 management simulation, Jurassic World Evolution, offering an all new narrative campaign voiced by cast members from across the Jurassic World film franchise, exciting new features, four engaging game modes, and an expanded roster of awe-inspiring dinosaurs.    An Original Jurassic World Story  Learn what it takes to be a park management master in Campaign mode, a compelling, original narrative that puts you at the heart of the action following the earth-shattering events of Jurassic World: Fallen Kingdom. Work alongside iconic characters from the films, including Dr. Ian Malcolm (voiced by Jeff Goldblum) and Claire Dearing (voiced by Bryce Dallas Howard), and lead the efforts to control, conserve, and contain wild dinosaurs now rampaging across the USA. Create your own Jurassic World  Take control with deeper management tools and creative options. Construct a range of customisable new buildings and hire new Scientists, and shape your park to meet the needs of both your guests and dinosaurs. Unleash your creativity in Sandbox mode, or test your skills in Challenge mode as you deal with diverse locations and environmental calamities. Play with Chaos Theory Play through key moments of your favourite films – with a twist. Experience ‘what-if’ scenarios from iconic Jurassic World and Jurassic Park films, each level set across eras and locations from all five movies. Dive into the Jurassic World franchise and see how events unfold when you take control. Discover Awe-Inspiring Dinosaurs Over 75 different prehistoric species come to life in Jurassic World Evolution 2, including highly requested flying and marine reptiles. These animals feel more alive than ever as they preside over territory, fight for dominance, and react intelligently to the world around them. Use bioengineering to customise dinosaurs with bold new colours, and alter their genomes to unlock traits.