Clubs and Looking for Group (LFG) on Xbox Live will be launching to the broader community soon on Xbox One and the Xbox app, giving you access to more people to play with and more choice in how you play. To make sure you hit the ground running and make the most of Clubs and LFG, we sat down with two engineers on the Xbox team to share walkthrough tutorials on the features and chat about their experiences helping bring them to life.

Q. Before we dive in, can you tell the readers a little about yourself?
I’ve been working on team Xbox for three and a half years. I started here as an intern on the team and came back right out of college to help launch the first Xbox One console. My Gamertag is ‘Iam Full of WIN.’ I am a very competitive Achievement hunter that spends most of my time playing puzzle platformers or indie games.

Q. So what is Clubs on Xbox Live?
Clubs are gamer-created and managed groups that can help you meet people and grow communities of gamers who love the same things you do. Anyone can join or create a Club, and you’ll probably see a Club for just about anything. It’s a way for gamers to connect and have fun with other people that share the same interests. I think Clubs are important because they create communities that you can go back to again and again to hang out with similar people, which makes your gaming experience even better.

Q. What was the most challenging aspect of helping bring Clubs to Xbox Live?
The most challenging aspect of Clubs was scoping the feature set or picking what we would build out for the feature’s launch. There are literally hundreds of suggestions from gamers, our research team and even fellow gamers on Team Xbox on what we could do for this holiday. It was tough to pick the right ones to release for our Xbox Holiday Update.

Q. Where do you and the team see Clubs going in the future?
Clubs has incredible potential to change the way people play. In the future, we hope to integrate more with features like Arena and the Gamerscore Leaderboard, and provide even more opportunities for gamers to share and advertise their Clubs to friends and potential new members.

Q. Does Clubs look different from what the team originally envisioned for the feature?
It’s not too different from what we imagined Clubs would look like, but we have been surprised by the trends in how people have been using them. We are proud of the diversity of the type of Clubs that have been created. From the ‘Anime’ Club and ‘Awesome Screenshots’ Club, to the ‘Meeting New Gamers’ Club, people are coming together on Xbox Live and connecting to play their favorite games or share content based on their interests.

Q. Any tips for gamers using Clubs for the first time?
If you’re new to Clubs, I would recommend checking out our Club Discovery area to find a Club based on games you are currently playing or check out the Clubs your friends are in by going to the ‘Following & clubs’ section on their profile. I’d also encourage users to make a Club that fosters the culture they want if they don’t find what they’re looking for via search. There are millions of gamers out there and Clubs is a great way to bring people together. 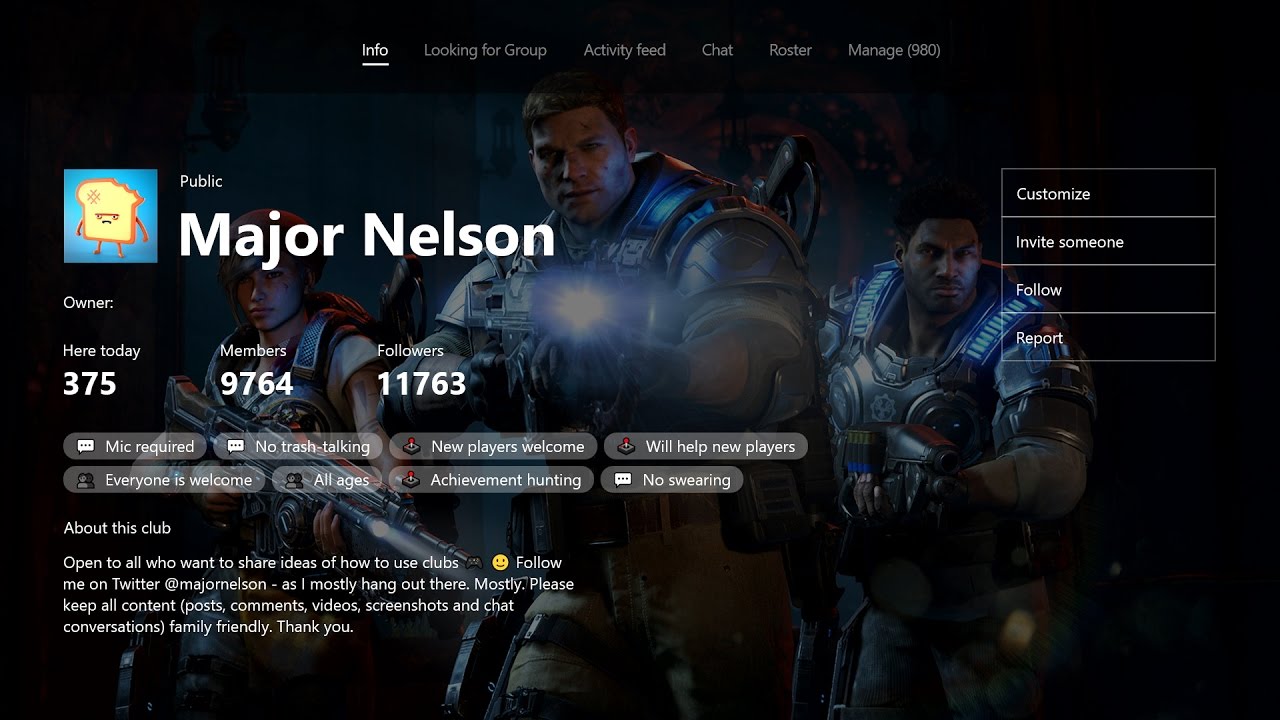 Q. Can you share some of your background with the readers?
I started at Microsoft in 2000 right after I graduated from Penn State with a degree in Computer Engineering. I’ve been on the Xbox Live team for almost 10 years now, currently on the multiplayer team. My Gamertag is Kramer, which I’ve been using since the original Xbox Live beta launched. I play a lot of different game genres varying from FPS, sports, platformers and puzzle games. If it’s on Xbox Live, I’ll probably try it. One of my favorite gaming moments happened a few years ago, when I was crowned the Super Bowl champion of a Madden tournament among the Xbox Live team (32 team members played through an entire NFL season and playoffs).

Q. Can you explain what LFG is?
Looking for Group, also known as LFG, helps you quickly find other players that you want to game with. It’s essentially like posting a gaming “want-ad” to the Xbox community. Whether you want to Achievement hunt, play a co-op campaign for Gears of War 4, or do a daily quest, with LFG, you can set the requirements you want to get the right group together. And it works for all Xbox One games, all Backward Compatible Xbox 360 games, and a growing list of top PC games.

Q. What was your most memorable moment working on LFG?
I would say both the community reaction to our E3 announcement and when Preview members started to use the feature. The feedback was very positive, and seeing it used in the different ways we intended it to be used for was extremely satisfying. The stories we’ve heard from gamers who’ve had great LFG experiences are priceless.

Q. What was the most challenging aspect of helping bring LFG to Xbox Live?
We wanted to make sure this feature could be used for all games on Xbox Live, not just the newest and most popular games. Making it easier to group up for the latest games, while also giving gamers tools to breathe new life into their old favorites was a goal of ours. Finding that balance was difficult, but we feel the end result delivers a powerful feature on top of something most gamers are already comfortable doing.

Q. Where do you and the team see LFG going in the future?
Some of the things we’d like to do is acknowledge great LFG hosts, improve scheduled LFGs with more options, and give hosts access to more data when vetting applicants. But the highest priority improvements will be the ones the gamers ask for, so keep the feedback coming. The community has been great about providing feedback while LFG has been in Preview, and we’ll continue to listen and evolve LFG once it’s available broadly.

Q. Does LFG look different from what the team originally envisioned for the feature?
I think if you look back at the goals we had in mind when deciding to build this feature, the team did a great job of executing on that vision. Like most healthy teams, compromises and tough cuts had to be made. But I think for the most part, the final result is something the whole team is proud of and is really giving gamers a great way to find people to play with. Of course, we are not planning on stopping here, so we will continue to add features to LFG.

Q. Any tips for gamers using LFG for the first time?
If you are new to using LFG, I would suggest searching for an LFG to apply for rather than hosting your own. Go to the Game Hub of the game you want to play, and find an LFG that matches what you want to do. Get a feel for your experience when joining someone else’s LFG, and then use that to decide how you might want to control your own experience. 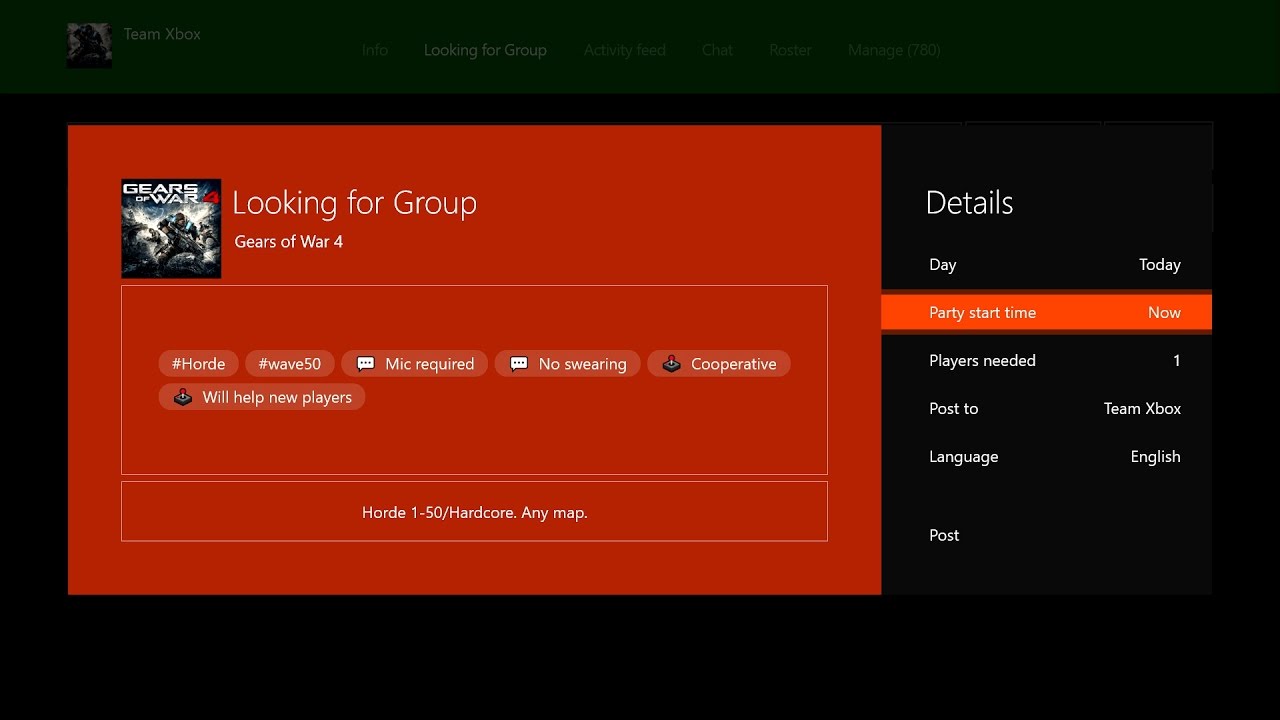