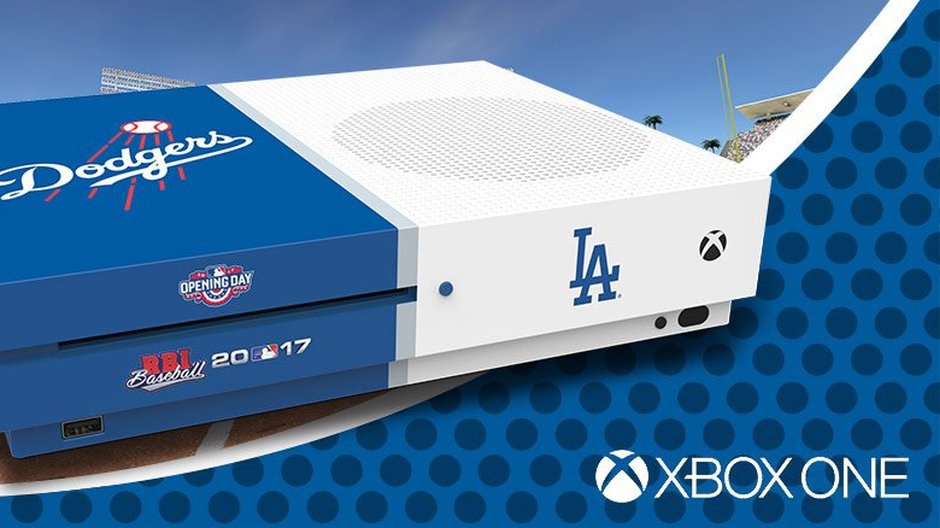 With Opening Day fast approaching, we’re super excited to announce that R.B.I. Baseball 17 returns to Xbox One for its fourth installment. Developed by MLB.com, R.B.I. Baseball 17 stays true to its classic arcade pick up and play roots to deliver a fast-paced and fun baseball game.

R.B.I. is packed with all your favorite MLB players, teams and ballparks with roster updates throughout the season. Speaking of favorite players, Dodger’s shortstop and National League Rookie of the Year Corey Seager is the cover star of this year’s game while Blue Jays outfielder Kevin Pillar is the face of the Canadian cover.

Also, beginning March 28, fans will have the opportunity to enter a Twitter sweepstakes for the chance to win a custom R.B.I. Baseball 17 team-branded Xbox One S console — you can see what the Dodgers console looks like above. Fans should follow @RBIGAME, @MLB or their favorite team accounts for complete details on the sweepstakes, which runs now through April 4 at 11:59 p.m. EDT. For more details, be sure to visit rbigame.com.

Back to the game details, R.B.I. includes three awesome game modes such as Exhibition which allows you to take on your friends or the CPU, Season where you can play the 2017 MLB calendar, and Postseason so you can enjoy October baseball all-year long. In Season mode we’ve built out simulation features so you can play the games you want and sim the rest.

We’ve also increased the fidelity of the ballparks from last year and added the brand-new SunTrust Park and updated center field to Minute Maid Park. We’ve also made improvements to gameplay, UI, and season mode.

If you’re new to R.B.I., here’s some pro tips to help play at the big-league level:

I hope these pointers help you step up your game. For more R.B.I. Baseball tips, follow @RBIGAME on Twitter and visit rbigame.com. You can purchase the game at participating retailers such as Gamestop, Best Buy and Target or as a digital download through the Xbox Marketplace. Play ball!