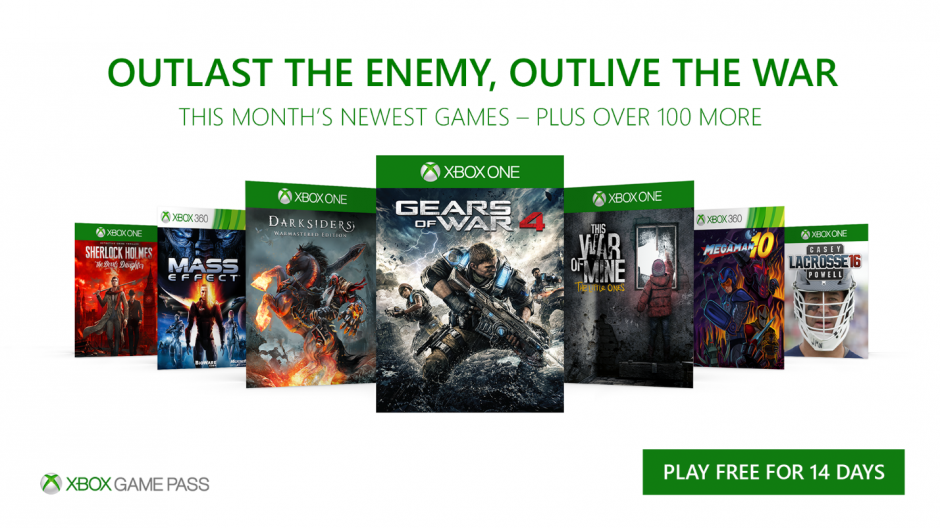 In addition to over 100 great games already included in your Xbox Game Pass membership, we’re excited to share the addition of yet another seven games starting December 1. Titles including Gears of War 4, Darksiders: Warmastered Edition, Sherlock Holmes: The Devil’s Daughter and more! Plus, tune in to Mixer on December 1 and watch our favorite streamers get hands-on with the latest additions to the Xbox Game Pass catalog.

But first, stop the press! For a limited time between November 17 – 27, you can start your Xbox Game Pass membership for $1! That’s right, get instant access to over 100 great games on Xbox One for just $1. We’re so excited to bring this offer to our fans during the Xbox Black Friday sale, and with holidays just around the corner, there has never been a better time to jump into Xbox Game Pass.

Also in time for the holidays, we’ve released a much-requested feature from our fans: the ability to gift Xbox Game Pass. Fans can now give the gift of over 100 games to those that matter most. Just head over to the Xbox Game Pass Store page and select “Buy as Gift.” You just need to know the gamertag or email address of who you’d like to gift to. It’s that simple!

Starting December 1, we also say 안녕하세요 (Hello!) to our fans in Korea, as Korea becomes Xbox Game Pass’ 40th market, and underscores our ongoing commitment to give fans all over the world more options to diversify and expand their library of games.

Gears of War 4
December brings a big list of holiday gifts for Xbox Game Pass members, and the first out of the box is Gears of War 4, the latest installment in the critically-acclaimed third-person shooter franchise from The Coalition.

Now, with the complete set of Gears of War titles included with your Xbox Game Pass membership, there has never been a better time than this holiday to become immersed in the story of the Fenix.

Jump into campaign solo or co-op and take on the role of J.D. Fenix, son to Marcus Fenix and Anya Stroud, as you and your band of Outsiders confront the Coalition of Ordered Governments, battle the impending Swarm, and unravel the mystery of Marcus Fenix’ last 25 years. And that’s just in the single-player campaign – there is more excitement to be found in multiplayer or Horde mode. As an added bonus, The Coalition is kicking off December with a double XP incentive.

Darksiders: Warmastered Edition
Also headlining December is Darksiders: Warmastered Edition, THQ Nordic’s third-person action adventure journey based on the lore of the Four Horsemen of the Apocalypse. You play the horseman War, and you are tasked with venturing out from The Scalding Gallow to explore and discover new lands, weapons, enemies, and abilities. The Endwar has begun on Earth, inciting a great battle between angels, demons, and man. Only War can break the Seventh Seal and finally restore order to the realm.

And don’t forget, Darksiders III is coming to the Xbox One family of devices in 2018, so if you’ve been curious about Darksiders but have never played it before, now is a prime opportunity to use your Xbox Game Pass membership and see what all that buzz is about.

Sherlock Holmes: The Devil’s Daughter
Friends and family unite this December to solve the thrilling mystery of Sherlock Holmes: The Devil’s Daughter, brought to you by BigBen Interactive. The legendary detective is back with five cases to investigate, as well as a host of additional personnel, professional, and moral hurdles to overcome along the way. Use your detective powers to collect all the evidence and solve each puzzle as you bring peace and security back to the streets of London.

Casey Powell Lacrosse 16
If you’re a sports fan, fun times await this month with Casey Powell Lacrosse 16. Lacrosse is a fast-paced, action-packed sport requiring keen strategy and tactical precision and CPL 16 delivers pace and excitement reminiscent of the real thing. If you’re new to Lacrosse, jump into the Lacrosse Academy to develop and polish your skills. From there, play pickup in Quick Match (solo or competitive multiplayer) or start your sure-to-be-illustrious journey in career mode. Are you a fan of customization? With CPL 16, create your own characters, build your own teams and forge your LAX dynasty from the ground up.

Mega Man 10
Did we mention we love Mega Man? The adventure continues in Xbox Game Pass in December with Mega Man 10 joining the catalog. Mega Man 10, the last and final installment in the legendary platforming saga, allows you to assume the role of either Mega Man or Proto Man and take on classic boss battles with Blade Man, Chill Man, Sheep Man, and more! Mega Man may seem fun and simple, but it can be a very challenging test of your skills. Struggling with your stealth? Play through the main story or jump into Challenge Mode, where you can polish your abilities in 88 different mini-games. There’s never been a better time to join the action and defeat the evil Dr. Wiley!

Mass Effect
We are beyond excited to bring Mass Effect to Xbox Game Pass on December 1! One of the greatest single-player action RPGs of all-time, Mass Effect is a true classic that has aged extremely well. In Mass Effect, we follow the story of Commander Shepard, a 22nd-century soldier assuming the tiny little mission of… saving the entire universe from a super race of ill-intentioned, mighty mechs. Choose from six different classes and level-up your character as you seek out and complete combat missions, resource gathering expeditions, and other side quests. Winner of multiple awards, Mass Effect is an incredible experience that we highly recommend you make time to check out in your journeys through the Xbox Game Pass catalog!

With over 100 great games, for just $9.99 a month, plus new games added every month, Xbox Game Pass is your ticket to endless play. Thanks for reading December’s Xbox Game Pass update, and don’t forget, you can start your Xbox Game Pass membership for just $1 between November 17 – 27.