To commemorate these releases, Square Enix sat down with Kingdom Hearts III Director Tetsuya Nomura and Co-director Tai Yasue, to discuss what fans can expect in the DLC. From new possibilities to customize your gameplay experience to heart-crushingly difficult boss fights, read on below for all the details.

Square Enix: You’ve added the Premium Menu in the Re Mind DLC; can you tell us how to best use this feature? Additionally, EZ Codes aside, what was the intention behind preparing Pro Codes, which put yourself at a disadvantage?

Tai Yasue: The Premium Menu is a function that allows you to customize various game settings in the Camp Menu, and you can select either EZ Codes or Pro Codes immediately after you start a new game.

EZ Codes are settings geared towards people who want to move right along in the game and includes things like Auto-Guard (automatic guard). Pro Codes include settings for people who want to enjoy the game at a high difficulty level and includes things like HP Slip (HP decreases at regular intervals of time). Additionally, EZ Codes and Pro Codes have specific achievements, and by changing settings to make new adjustments, you can aim toward obtaining these achievements.

Among the EZ Code achievements, we’ve prepared some curve balls like one where you must get all the way from the top of Rapunzel’s tower to the Kingdom of Corona without setting foot on the ground very much.

Tai Yasue: They are completely different. We created everything anew, including AI and action.

In fact, after beating them, my hands kept shaking for about 15 minutes – the nervousness and feeling of accomplishment is ridiculous.

SE: To you, what is the highlight of the Limit Cut bosses? Which character do you want players to keep an eye out for?

Tetsuya Nomura: I had already decided that the Limit Cut boss lineup would be comprised of the members of Real Organization XIII, but as the development progressed, I started to feel conflicted as whether to keep Xion as one of the bosses or not.

However, by the time I mentioned my intentions of possibly removing Xion to Mr. Yasue, she was already in development. With this background in mind, I’d like the players to experience their own inner turmoil when they take on Xion. She’s quite a tough boss to beat!

Tai Yasue: We took a survey of developers and testers who had beat the past secret bosses in the Kingdom Hearts series thus far, and we received feedback that it is “so strong that it makes you cry.” Its number of attack patterns is particularly high – it’s a secret boss that takes time to figure out how to get past.

However, as was the case for The Real Organization XIII in the Limitcut, there is a way to get past all of the character’s movements, so its strength isn’t unreasonable, and you can win without sustaining any damage if you have a perfect playthrough.

SE: Can you share any additional details regarding the Secret Boss and Episode?

Tetsuya Nomura: I put my ideas of how the Secret Boss and Episode will lead the way for the next installment into it, although it is probably not possible to work out what that will be from the details that have already been released, even though it might just look like you can. Additionally, some of the battle construction itself was quite different to what I ordered. I was surprised, and so decided to go down this route this time around.

SE: Finally, is there anything you’d like to say to the fans?

Tai Yasue: The DLC has been expanded in all its facets, including battles, story, and system. Its contents are made to allow an even deeper enjoyment of Kingdom Hearts III.

Tetsuya Nomura: After work on Kingdom Hearts III finished, several things happened and there was some internal restructuring, so I am very sorry to have kept everyone waiting longer than initially expected.

In Re Mind we have been proactive in adding in new elements that give players enjoyment from playing around and exercising their creativity. It is easy to be drawn to the story, but most of the time spent developing this expansion was focused on adding the new battles and mechanics changes.

We hope players really enjoy these kinds of merciless challenges that you can only really do as DLC. We also greatly expanded the sharing features of Kingdom Hearts III, unlocking pretty much everything. Yasue has been saying that he wants to see everyone’s secret battle videos, so we have opened that up as far as we can too. See if you can take these fearsome foes down!

Kingdom Hearts III Re Mind launches February 25 on Xbox One. Have fun! 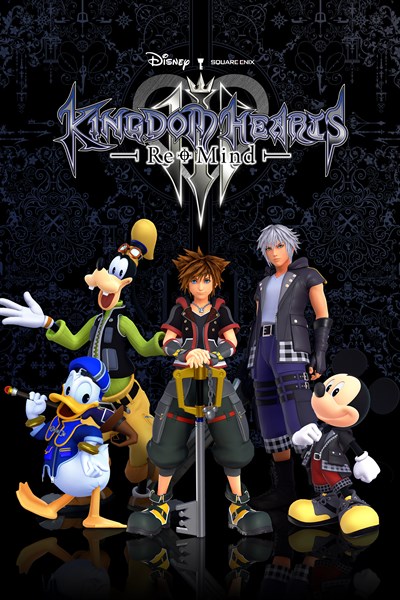 ☆☆☆☆☆ 65
★★★★★
$29.99
Get it now
Re Mind—The other tale that unfolded during the climax of KINGDOM HEARTS III. Determined to rescue Kairi, Sora travels to the Keyblade Graveyard a short time before the final battle was to take place. Lacking a corporeal form, he traces the hearts of the seven guardians of light. Through experiencing their personal battles firsthand, Sora is about to discover truths that he has never before imagined. * The retail version of KINGDOM HEARTS III is required to use this content. Please also make sure to update to the latest version. * This product does not contain the concert video content and it is not available as a standalone purchase. After purchasing this product, you will only be able to view the concert video content by additionally purchasing “KINGDOM HEARTS III Re Mind + Concert Video” at full price.