You didn’t enter the Rocket Arena Championship Tour to finish second. You’re here to lift the trophy! To help you rule the roost, we’ve compiled a few tricks and tips from the Final Strike Games team on how to blast your way to greatness (and keep from being blasted out of the arena). You can’t just shut your eyes and squeeze the trigger — to unlock the true potential of your hero, you’ll need to become one with your rocket.

Get a Jump on the Opposition

Your rocket launcher is far more than a weapon. It’s also your best way to traverse the arena. Normally shooting yourself in the foot is a bad thing, but not here — fire at the ground beneath you to Rocket Jump as much as you want! You can also Rocket Climb nearby walls by firing at them. Just aim slightly down and you’ll launch yourself upwards. Once you get the hang of it, you’ll find there’s a lot to be gained by exploring vertically. Don’t get stuck on the ground floor!

Remember, no one dies in Rocket Arena. Your goal is to knock your opponents off the map. Hitting opponents will impulse them, launching them into the air. Harder hitting attacks will impulse players farther. You can K.O. opponents by impulsing them into the Arena Bounds or Megablasting them. That also means you want to watch where you step — try to avoid loitering near Arena Bounds where opponents can easily blast you out. If you do get knocked out, don’t worry! You’ll automatically fly back into the action. Use the time to survey the action, plan your next move, and think about all the mistakes that led you here. Just promise yourself you’ll do better next time.

Hitting your opponents will increase their Blast Meter. The higher their Blast Meter, the farther they’ll fly when impulsed and the longer they’ll be in Hit Stun. While Hit Stunned, player’s can’t use their abilities. The duration of Hit Stun is based on how high your Blast Meter is and how much damage the enemy dealt to you.

Obviously, being hit by a rocket is less than ideal. Luckily, you’ve got a Dodge ability that makes you invulnerable and causes rockets to pass through you. You can also use Dodge to break out of Hit Stun, giving you back control and halting your momentum. A well-timed Dodge can make all the difference so don’t forget to break it out when the occasion calls for it.

What Makes You Special?

Not just anyone can compete in the Rocket Championship Tour. There’s something special about every Hero in the arena. Each competitor has a Primary, Secondary, and Special ability that’s unique to them. Some also have unique movement abilities tied to their jumps. And most Specials will reset your Hero’s air jumps, which you can potentially use to save yourself from being KO’d. Since everyone has different strengths, weaknesses, rockets, and powers, it’s worth experimenting in Practice Mode to get the hang of a new Hero.

There’s a lot more to learn, but that should be enough to get you started. Or, if you’re in the mood for more learning, visit our website for even more tips and info. You can’t be too prepared. Either way, Rocket Arena is available now – see you in the arena soon! 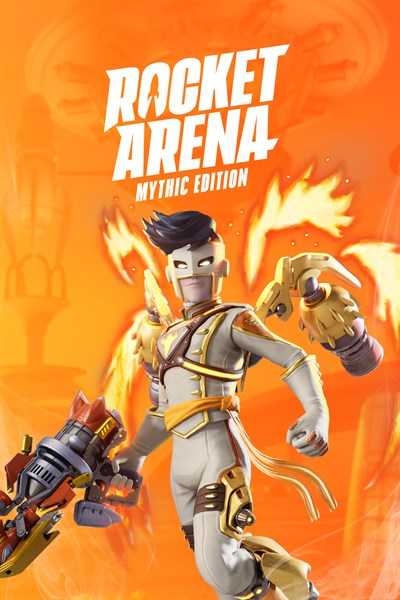 ☆☆☆☆☆ 533
★★★★★
$9.99 $8.99
Get it now
Welcome to a world where the rules are written in rocket fuel. Rockets rule everything in Rocket Arena, an explosive 3v3 shooter where you’re never out of the action. Master your hero’s unique rockets and abilities to rule the arena and become a champion! Try out an ever-growing roster of fantastic heroes with distinctive powers. Unearth new strategies and tactics based on your squad, explore a wide variety of dynamic maps, and discover the true depth of rocket gameplay. Fuel your inner hero with the Mythic Edition! The Mythic Edition includes: Guardian Phoenix Jayto Mythic Outfit Frost Princess Kayi Outfit Cyber Sailor Blastbeard Outfit Stone Temple Izell Outfit Pulsar Megablast Trail Fragment Return Trail 1000 ROCKET FUEL Rocket-Fueled Heroes Explore a growing roster of fantastic heroes, each with distinctive personalities, backstories, and rivalries. Master your hero’s powerful abilities and signature rockets and get the most out of your squad. Death-Defying Action Never say die, because in Rocket Arena, you can’t! Taking too many hits will blast you out of the arena, but not out of the action. Ride your rocket right back in, survey the scene, and return to the fight. Reach New Strategic Depths (and Heights) Rockets are easy to use but challenging to truly master. Learn how to time your dodges, lead your targets, and use items and gadgets like the Rocket Magnet, Trip Mine, and Speed Boost to change the course of combat. Become one with your rocket and you will rule the arena. Explore a Bold New World From tropical ruins of The Gemstone Jungle to the high-tech, utopian Boom City, the world of Crater is home to many exotic locales. Each map is filled with hidden tricks, traps, and lore to explore. Use your rockets to jump, climb, and explore the environment. There’s a world of possibility, so grab your rockets and take off! Evolve Your Heroes The sky’s the limit for your heroes. Every match you play with them earns experience, unlocking Rocket Parts, Totem Parts, and spectacular outfits you can use to customize their look. You’ll also unlock powerful artifacts as you play — mix, match, and level them up to give your heroes impressive new stat boosts and effects! You’ll need every edge you can get to rule the Rocket Championship Tour. Change the Game There’s more than one way to play. Dive into Knockout for classic 3v3 competitive action, or warm up first against RocketBots and test out your favorite combos. Compete to score goals in Rocketball, control zones in Mega Rocket, and go for the gold in Treasure Hunt. When you’re ready to go rocket-to-rocket with the best, dive into Ranked Play and show ‘em what you’re made of. Let’s Rocket! This game includes optional in-game purchases of virtual currency that can be used to acquire virtual in-game items. CONDITIONS AND RESTRICTIONS APPLY. SEE WWW.EA.COM/LEGAL FOR DETAILS. © 2020 Final Strike Games, Inc. EA and the EA logo are trademarks of Electronic Arts Inc. Trademarks are the property of their respective owners.