Prepare yourself for a huge dose of metaphysical mayhem in Borderlands 3! You and your fellow Vault Hunters are diving into the mind of a fan-favorite antihero in Psycho Krieg and the Fantastic Fustercluck, the fourth campaign add-on for Borderlands 3, available now on Xbox One.

If you’ve played a Borderlands game before, you already know how many vicious psycho bandits roam the wastes of Pandora, eager to fight to the death. But the cause of their seemingly shared and remarkably uniform psychosis has remained a mystery… until now. Your favorite scientist Patricia Tannis has a theory that the galaxy’s psychos have all been driven to madness by knowledge of a mythical location she’s calling Vaulthalla, and she wants you to put her theory to the test.

The most sensible approach to verifying Vaulthalla’s existence would be consulting your fellow Crimson Raider, feared psycho, and renowned badass Krieg, who you first met back in Borderlands 2. But clear communication isn’t Krieg’s strong suit, as he’s constantly screaming out nonsensical phrases. Fear not: Tannis has devised a way to project you directly into Krieg’s consciousness in hopes of discovering Vaulthalla and its Legendary rewards, which are rumored to include new weapons, new gear, new Vault Hunter Heads and Skins, and more.

Instead of visiting a physical planet, this campaign DLC takes place entirely within Krieg’s Mind, a realm full of twisted mindscapes and fragmented memories that don’t adhere to real-world physics or common standards of decency. With all the enemies he’s slain and atrocities he’s witnessed over the years, Krieg’s imagination is filled to the brim with deadly hazards. If you want to survive long enough to see Vaulthalla and score a host of new Legendary weapons and items, you’ll have to team up with both sides of Krieg’s dual psyche: the raving murder machine everyone sees, and the calm inner voice that keeps Krieg’s rampages pointed at deserving targets.

Regardless of whether you own Psycho Krieg and the Fantastic Fustercluck or any of the other Borderlands 3 campaign add-ons, you can take advantage of the new level cap of 65 going live along with this content. With the five additional skill points provided by this new max level, you have even more room to experiment with powerful Vault Hunter builds that’ll crush anything standing in your way.

Psycho Krieg and the Fantastic Fustercluck rounds out the four campaign DLCs included in the Borderlands 3 Super Deluxe Edition and the Borderlands 3 Season Pass. If you haven’t played them already, be sure to check out Moxxi’s Heist of The Handsome Jackpot, Guns, Love, and Tentacles: The Marriage of Wainwright & Hammerlock, and Bounty of Blood after you’ve finished wreaked havoc inside Krieg’s chaotic mindscape. Still want more? Then be sure to tune in to PAX Online this Saturday, September 12!

Get ready to say goodbye to sanity and do battle through the surreal surroundings of Psycho Krieg and the Fantastic Fustercluck! 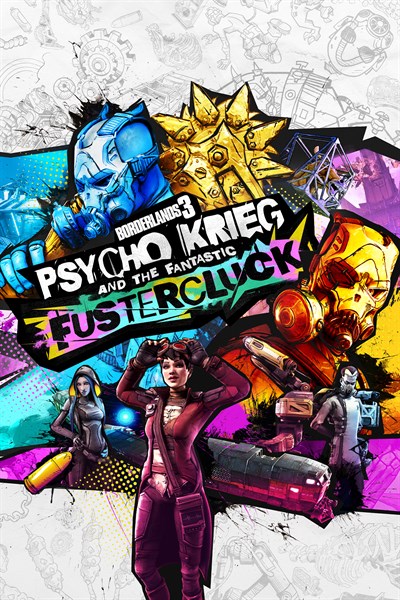 ☆☆☆☆☆ 100
★★★★★
$14.99 $10.04
Get it now
Bloodthirsty psychos are everywhere in the Borderlands, but what makes them so uniformly deranged? Brilliant scientist Patricia Tannis theorizes they've all been driven insane by the knowledge of a mythical place she's dubbed "Vaulthalla." And the key to uncovering this legendary location lies with the most badass psycho of them all: Krieg, an unlikely ally who swings his viscera-soaked buzz-axe on behalf of the Crimson Raiders. Unfortunately, every attempt to get information from Krieg quickly devolves into yells of "Butchery for juicy weasels!" and other equally unhelpful exclamations. The only way to learn the true nature of Vaulthalla is to climb inside Krieg's chaotic mind and seek it out yourself. Using absurdly advanced technology, Tannis is sending you and your fellow Vault Hunters on a mission set entirely within Krieg's consciousness. You'll have to befriend both sides of Krieg's psyche: the screaming murder machine the world sees every day, and the calm inner voice that tries to steer Krieg's rampages in the right direction. You'll explore a surreal mindscape where the laws of physics and human decency rarely apply, helping Krieg process his warped worldview and traumatic memories by blasting his inner demons to bits. Just try not to succumb to lunacy inside Krieg's imagination, which is littered with memory fragments, distorted landscapes, and meat. So much meat. Only by surviving Krieg's twisted inner world can you reap the rewards of Vaulthalla, so say goodbye to sanity as you know it. Or as Krieg would say, "Chew the spine and splash the eyeballs! It's the happiest day of your death!" This content requires Borderlands 3 to play and is included in the Season Pass. What's New •Journey through the many demented vistas of Krieg's psyche, where anything is possible and very probably violent •Experience the world as Krieg sees it, including his perception of fan-favorite characters like Maya, the light of his twisted life •Overcome a vast array of life-threatening manifestations that Krieg's mind conjures up •Expand Krieg's mind and Tannis' research in surreal side missions and Crew Challenges •Score powerful Legendary weapons and gear that will still work outside of Krieg's consciousness, according to Tannis •Acquire brain-busting cosmetic items including Vault Hunter Heads and Skins