Starting today, slip on your oversized space boots and take control of a three-tiered donut-shaped space station, managing the needs of alien visitors and residents across a fully voiced single-player campaign.

Hire and house a diverse range of E.T.’s to keep your space base up to snuff, and ensure your visitors mention their trip to friends by giving them unique entertainment experiences like visits to cat cafés and all-night parties led by levitating DJs.

Though hilarious to look at, lifeforms aboard Spacebase Startopia also serve a practical purpose – energy. Harness this precious resource to expand your base and make it the #1 hotspot in the galaxy!

Manage three unique decks: the Sub Deck – your base’s industrial beating heart; the Fun Deck – an area dedicated to ensuring your visitors’ receive a hefty dose of dopamine; and the Bio Deck – the agricultural hub where you can grow vital resources, assisted by the green-thumbed Dryads.

However, it not all sunspots and cosmic rainbows! Assert yourself against rivals with sly acts of economic sabotage or, if you’re not too fussed about stealth, send mechs to wreak havoc on those challenging your dominion. Oh, and keep all three eyes peeled for space pirates sailing in on the solar winds.

Spacebase Startopia features an extensive single-player campaign, amorphic sandbox mode, and competitive and cooperative multiplayer for up to 4 players. Pre-purchase now and join a bevy of intergalactic shenanigans in this one-of-a-kind city-builder set in spaaaaaaace! 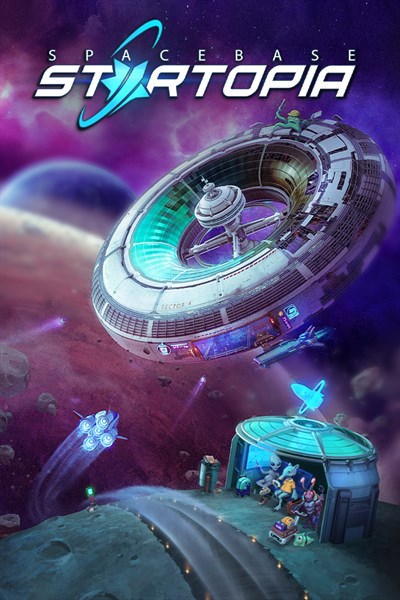 ☆☆☆☆☆ 203
★★★★★
$49.99
Get it now
Free Trial
"Help, we're all going to d… Wha… Oh, excuse me, it seems my system is no longer up-to-date – [old memory status deleted] – so, much better… WELCOME to the Spacebase Startopia! I'm VAL, your helpful and efficient Space Station AI! According to my records, this Station hasn’t been used at all in the last 17 years! How very strange. Furthermore, it would appear that you are the only rational life form in this Sector. Well then, CONGRATULATIONS! I hereby officially pronounce you Commander of this Space Station! Hopefully you will enjoy more success than your predecessor who, according to the logbook, er… ran into some wormlike Aliens… Oh, nothing to worry about! To keep the same thing from happening to you, there's a lot you're going to have to do. Amongst others, there’s the development of further Sectors, maintenance of the three vital Main Decks as well as the customer acquisition and entertainment of our extraterrestrial visitors, who provide us with sufficient Energy for our plans for global improvement. Oh, and before I forget – it's probably just a bug in my security protocols anyway – but my sensors are showing just loads of enemy creatures in all of the other Sectors… So, what are we waiting for? Let's get to work! Let us join forces to conquer space." SPACEBASE STARTOPIA captivates with its original mixture of economic simulation and empire building strategy paired with classic RTS skirmishes and a good dose of humor. In addition to the challenging single player Campaign and the versatile battle mode, there are also competitive and cooperative multiplayer modes for up to four players. And as if maintaining the three Space Station Decks, entertaining the eight Alien races and defending against enemy invaders were not enough of a challenge, the dynamic narrator AI is not going to mince matters and commentates the events in a lovely but sharp-tongued manner. – The 10-mission, fully dubbed single-player Campaign will require all your skills as Commander of the Spacebase Startopia as you strive to create one of the most attractive trade and tourism destinations in the known universe. – Each of the three Decks will require your leadership skills, with the Sub Deck containing all of the Rooms vital to survival, while the Fun Deck focuses on your visitors and the flora and fauna found on the Bio Deck provides sufficient Resources for survival as well as a home to the graceful Dryads. – Prevail against your competitors, for you are not alone on the Space Station. Sabotage your opponents' economy or attack them with your Mech Units, conduct trade and beware of Space Pirates eager to board your Station. – The dynamic narrator AI “VAL” reacts to your decisions and is always at your side in both word and deed – and the occasional extremely unqualified comment. – In addition to the extensive single player Campaign, an individually configurable sandbox mode as well as both a competitive and a cooperative multiplayer mode for up to four players awaits you.