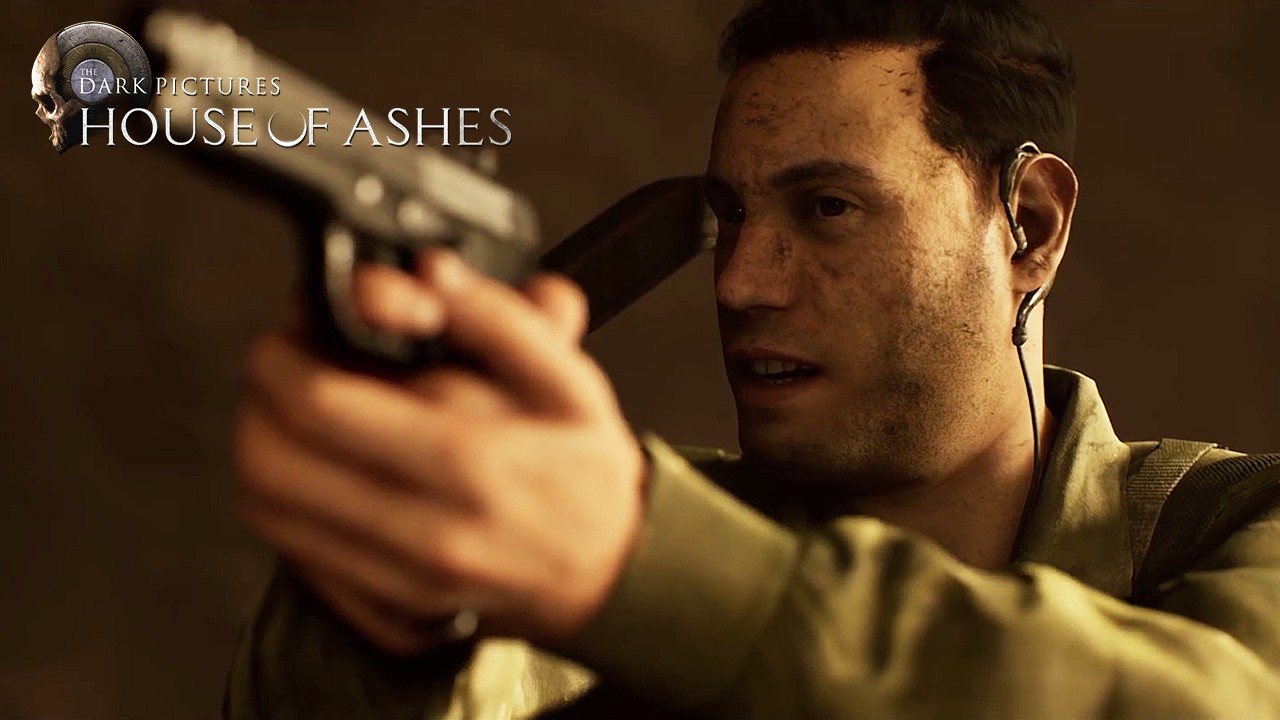 Hi there! Today, I’m going to talk about one of my favorite themes in House of Ashes, which revolves around the saying, “The enemy of my enemy is my friend.” In this post, I’ll explain how we use that saying to explore and develop the relationships in the game and how we let you, the player, choose how to interpret it.

First off, let’s wind back to the beginning of the game. House of Ashes takes place near the end of the 2003 Iraq war. An elite military unit searching for weapons of mass destruction gets into a firefight with holdout Iraqi forces, and during the battle, an earthquake pitches both sides into the ruins of a buried Sumerian temple. The survivors soon discover that they’re not alone — they’ve woken a nest of unearthly creatures, which are hungry for blood!

Our soldiers are highly trained and well equipped, but nothing could prepare them for what they face down there in the dark. These creatures are ruthless killing machines, and the soldiers soon find themselves outnumbered and outmatched. To survive, they must learn to evade, adapt, and strike back against the horde of inhuman creatures hunting them—and the only way to do that is to form an alliance with their human enemies.

But old rivalries run deep. At first, the opposing forces still wage war against each other deep underground, whilst in the shadows they’re hunted by a very different kind of enemy. Setting our game during the Iraq War immediately gave our characters a strong set of rivalries, prejudices, and distrustful opinions. Even when they realize that working together is essential to survival, they still harbor grudges against each other. As the player, it’s up to you decide how to develop and build on the relationships in the games. Will you take the tougher stance, and make the hard choices when members of your group crack or slow you down? Will you go back to rescue a stranded comrade? Abandon your injured team members? Disarm your captured enemies? Each cold decision you make takes you one step further from your own humanity. At what point do you become as ruthless as the enemy? And at what cost?

War stories are often written by the victors and have a habit of dehumanizing the enemy. In House of Ashes, we wanted to show both sides of the conflict in a realistic light—as human beings, with common values. In the face of an implacable, inhuman threat, the rivalries of the world above are stripped away, and all that’s left is survival: “The enemy of my enemy is my friend.” On both sides of the conflict, you’ll learn that our characters are more than just soldiers: they’re real people with painful regrets, unrequited desires, and ardent loyalties. As you progress through the game and expose newer and greater threats, you’ll learn that working with your enemy could mean more than just survival—it could be the only thing that keeps your humanity. To survive the night below, you may need to forge a brotherhood with your enemies from the world above.

At the end of the day, how you manage the relationships between opposing factions determines who survives the underworld. Ultimately, it’s all down up to you—in this tale, everyone can live, or everyone can die.

House of Ashes is out on October 22 for Xbox One and Xbox Series X|S. We can’t wait for you to play it!

☆☆☆☆☆ 408
★★★★★
Get it now
Pre-order now and receive the Curator's Cut, featuring new scenes playable from the other characters' perspectives with brand new choices and decisions to make. The Curator's Cut is only available once you have completed the main story. The Dark Pictures Anthology is a series of standalone, cinematic branching horror games where the decisions you make in the game determine the story and the outcome you receive. House of Ashes is the third game in the series. In House of Ashes, at the close of the Iraq War, Special Forces hunting for weapons of mass destruction unearth something far deadlier – a buried Sumerian temple containing a nest of unearthly creatures. To survive the night below, they must forge a brotherhood with their enemies from the world above. – Navigate the underworld and escape a terrifying threat Fight your way out of a buried Sumerian temple against hordes of deadly monsters that have claimed you as prey. – The enemy of your enemy is your friend This time, your crew is composed of 2 opposing factions that rarely see eye to eye. Can you put aside your characters' rivalries to fight together as one? – Don't play alone The two critically acclaimed multiplayer modes are back. Share your story online with a friend or aim for safety in numbers through the offline 5-player pass-the-pad mode.