Riders Republic launches on October 28 for Xbox One and Xbox Series X|S, but you don’t have to wait until then to jump into the massive multiplayer outdoor sports playground. You’ll be able to try it for free during Time-Limited Trial Week, from Thursday, October 21 at 12 a.m. PT until Wednesday, October 27 at 12 a.m. PT. You’ll get access to four hours of free play during Time-Limited Trial Week, and all progression will be saved and carryover to the full version of the game if you purchase it. Click here to download.

In Riders Republic, you’ll be able to compete and show off your wildest tricks across an open world of outdoor sports such as biking, skiing, snowboarding, wing-suiting, and rocket-wing-suiting. During Time-Limited Trial Week, you will have access to all five career progressions and the following multiplayer modes:

Time-Limited Trial Week players will also be invited to take part in the Mad Challenge, a multiplayer contest that gives you a chance to win rewards. Sign up here to participate in the challenge, then reach 20 stars to unlock the ShackDaddy Bandits’ “Exclusive Multiplayer Contest” to access the mass race. Players who place in the top 10 in a mass race will be entered in a random draw, where one player will win a custom Canyon x Riders Republic bike and a Gold Edition of Riders Republic, which includes the base game and the Year One Pass. Additional winners will also receive the Riders Republic Gold Edition.

Riders Republic officially launches on October 28 for Xbox Series X|S and Xbox One, and will support cross-play and cross-save across all platforms. For all the latest information visit ridersrepublic.com. Get ready to shred some snow and dirt and leave your competition in the dust! 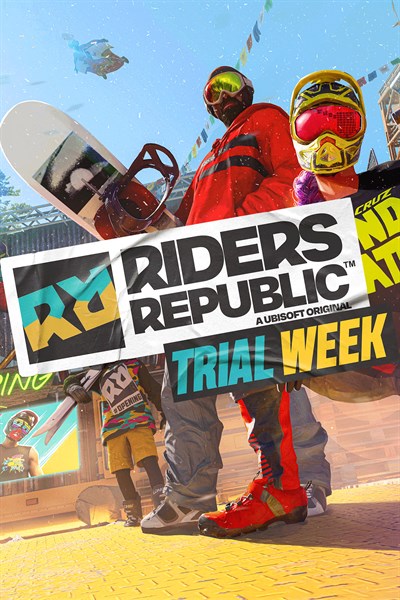 ☆☆☆☆☆ 213
★★★★★
Get it now
Try the game for free during the Trial Week from October 21st to 27th! Jump into the Riders Republic™ massive multiplayer playground! Grab your skis, snowboard, bike, or wingsuit and explore an open world sports paradise! – Join over 50 players simultaneously in a massive multiplayer playground – Compete in all-out mass races—collide, grind, and fight your way to the finish – Customize your character to show off your style to your friends and competition – Draw the attention of sponsors by participating in prestigious events – Bike, ski, snowboard, or wingsuit in a variety of modes, from tricks challenges to fast-paced races – Go wild on the heights of iconic US national parks like Yosemite, Zion, and Bryce Canyon

☆☆☆☆☆ 600
★★★★★
Get it now
This game leverages Smart Delivery allowing access to both the Xbox One title and the Xbox Series X|S title. Pre-order now to get the Bunny Pack! Includes custom bunny outfit and snowboard graphic. Jump into the Riders Republic™ massive multiplayer playground! Grab your bike, skis, snowboard, or wingsuit and explore an open world sports paradise where the rules are yours to make—or break. – Battle against over 50 players simultaneously in a massive multiplayer playground—over 20 players on Xbox One. – Compete in an all-out mass start race—collide, grind, and fight your way to the finish! – Customize your character to show off your style to your friends or show up the competition. – Bike, ski, snowboard, or wingsuit through a seamless open world in Career mode or multiplayer events. – Go wild in iconic US national parks like Yosemite and Zion.