Far Cry 6’s third DLC episode is now available, letting you step into the mind of Joseph “The Father” Seed, the formidable villain of Far Cry 5 and leader of the fanatical cult, The Project at Eden’s Gate. Out now on Xbox One and Xbox Series X|S, Joseph: Collapse lets you play as Joseph as he fights to escape the horrors of his own tortured mind, set in a twisted version of Hope County, Montana.

After his faith has collapsed, Joseph must face off against his former cult followers and ultimately confront his family members. Like the first two DLC episodes, Vaas: Insanity and Pagan: Control, Joseph: Collapse is inspired by roguelites: After every death, you’ll lose the weapons, items, and cash that you were carrying. If you can stay alive, you can use cash to buy or upgrade weapons, or unlock permanent traits that will help you push further into Joseph’s psyche.

If you own Far Cry 6, you can get Joseph: Collapse as part of the Season Pass, or as a separate purchase. Like with Far Cry 6 and its previous DLC episodes, you can play it with a friend in co-op, and with the Buddy Pass, you can invite another Far Cry 6 owner to join you on Xbox, even if they don’t own the DLC. To celebrate the launch, all editions of Far Cry 6 are on sale for up to 40% off, and owners of Far Cry 6 can get the Season Pass for 25% off at the Microsoft Store.

Far Cry 6 owners can start playing Joseph: Collapse today. Experience Hope County once again through the eyes of a former cult leader as he struggles to conquer his inner demons. 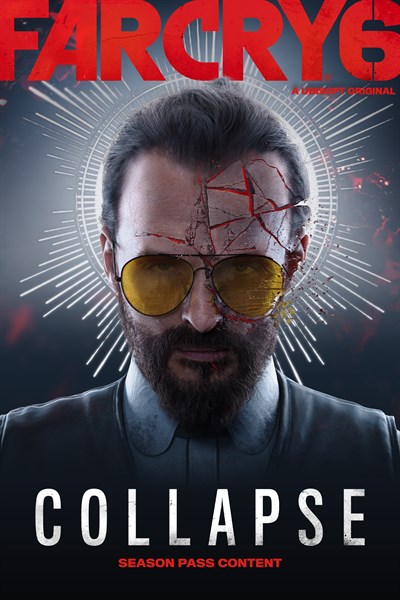 ☆☆☆☆☆ 36
★★★★★
$14.99
Get it now
Become the villain as you step into the mind of Joseph Seed from Far Cry® 5. Battle your inner demons as you unveil the backstory of this iconic villain. Explore unique locations in a twisted version of Hope County, fight your former followers, confront your family members, and escape your own mind in this die-and-retry gameplay experience.

☆☆☆☆☆ 597
★★★★★
$59.99
Get it now
Free Trial
Welcome to Yara, a tropical paradise frozen in time. As the dictator of Yara, Antón Castillo is intent on restoring his nation to its former glory by any means necessary, with his son, Diego, following in his bloody footsteps. Their oppressive rule has ignited a revolution. – Play as Dani Rojas, a local Yaran, as you fight alongside a modern-day guerrilla revolution to liberate Yara. Play the full game solo or with a friend in co-op. – Explore jungles, beaches, and cities on foot, horseback, or in a wide variety of vehicles including boats and Jet Skis as you fight against Castillo’s regime in the most expansive Far Cry to date. – Feel the thrill of combat with an arsenal of hundreds of weapons alongside helpful amigos like Chorizo the dog and Guapo the gator. – Enjoy all-new content and features added since launch, including four new special operations, free blockbuster crossover missions, and fan-requested updates such as New Game Plus, Completionist Aid, an extra-hard difficulty mode, and four new loadout slots. There has never been a better time to join millions of players in Yara! This game leverages Smart Delivery allowing access to both the Xbox One title and the Xbox Series X|S title.