Outriders Worldslayer has just been revealed and we’ll soon be adding a host of cool new stuff to the original game — let’s take a look!

Firstly, the basics: Outriders Worldslayer introduces a brand-new campaign for you to play through. If you’re a hardened Outriders veteran, you’ll recall that the original endgame saw you running through multiple expeditions to seize control of drop pods. The landing of these drop pods was triggered by story events in the original campaign, and each drop pod strengthened humanity’s foothold on the planet Enoch.

However, Enoch was also host to a strange entity called the Anomaly. The Anomaly can be considered the main threat of the original game, as it continually evolved all living matter on the planet to counter the threat posed by humanity and the Outriders.

Your expeditions may have made humanity stronger, but in doing so the Anomaly too evolved to deal with you. At the start of the Outriders Worldslayer campaign, the Anomaly has begun to inflict blizzards, frost storms and flash freezes onto the planet, which puts almost everything on the planet in grave danger. To find a solution, the Outriders will need to travel to the furthest reaches of Enoch… while also dealing with a powerful new Altered called Ereshkigal.

The quest to save humanity from the Anomaly’s climate catastrophe will force your paths to cross with Ereshkigal’s multiple times and she becomes the main antagonist of Outriders Worldslayer. While the threat posed by the Anomaly has in the past allowed us to deliver a great story with a few twists and turns, we do know that players like to have a visible main antagonist to challenge them, so we’re quite excited to be able to introduce her. Standing alongside Ereshkigal to face the player is her own faction of humans on Enoch. Suffice to say, the road ahead won’t be easy…

Worldslayer introduces Pax class trees, which are a separate class tree from the already extensive system players will be familiar with. Each class has its own Pax class tree, which are all roughly split into two intertwined branches. Unlocking points to invest into the PAX class tree requires you to progress through Worldslayer’s main campaign (and even beyond!). Each of the in-total-five available points will unlock upon completion of significant events in Worldslayer. It is worth mentioning that each node in the Pax tree is equivalent to the major nodes in the original class trees, so every choice you make in the Pax tree will be impactful to the performance of your Outrider…

Another new system introduced with Worldslayer is the Ascension system. While the max character level remains 30 in Worldslayer, Ascension allows you to add another 200 levels on top of that. Each time you level up you will earn a point that can be spent in the Ascension system in one of four categories, each of which have another five options. You could, for example, choose to max out your cooldown reduction using the Ascension system. Or, alternatively, you could boost your firepower while at the same time increasing your resistances. The decision is yours and no choice is permanent, thanks to the ever-present option to respec at any time. The idea behind Ascension is to make every play-session worthwhile, as you will constantly be getting stronger and stronger.

Finally, there is the newly introduced Apocalypse system. As a reminder, the difficulty in Outriders is set using “Tiers” systems, which allow each player to fine-tune the overall game to their preference. Higher Tiers mean higher difficulty but also improved rewards and the ability to equip higher level gear. Worldslayer introduces up to 40 Apocalypse Tiers, which may well pose some of the greatest challenges players will need to surmount in Worldslayer. At tier 40, your Max Gear Equip Level will be Level 75, which is the new level cap (25 levels higher than in the original Outriders).

Outriders Worldslayer will introduce plenty of extra content, including a new endgame (we’ll share more on this later on) and a ton of new legendary gear items and sets. Make sure to check out the Outriders social channels for more details on anything that intrigued you here…

We hope you’re as excited as we are about Outriders Worldslayer, and we can’t wait to show you more of what’s in store for you! See you soon! 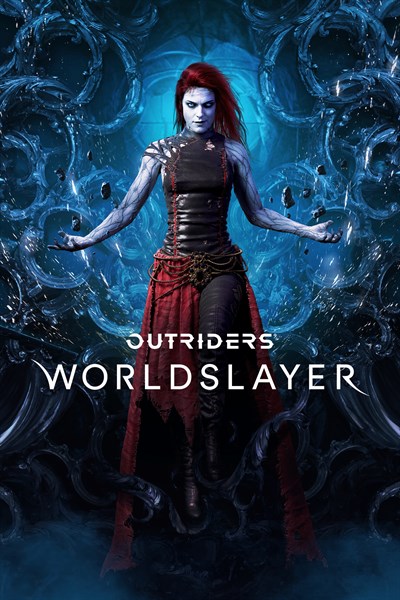 ☆☆☆☆☆ 436
★★★★★
$59.99 $47.99
Get it now
OUTRIDERS WORLDSLAYER is a brutal 1-3 player co-op looter shooter set in an original, dark sci-fi universe. You’ll create your own Outrider from one of 4 powerful classes and journey across the diverse and deadly planet Enoch. Begin with the original OUTRIDERS campaign or use the boost to jump straight into the Worldslayer campaign with a fully geared up level 30 Outrider. Here you will face off against the most deadly Altered ever encountered – Ereshkigal, in humanity’s last fight for survival. Beyond her even greater horrors exist in the ultimate endgame experience taking place in the ancient ruins of Tarya Gratar. Combining aggressive gunplay with violent powers and an arsenal of increasingly twisted customisable weaponry and gear-sets, OUTRIDERS WORLDSLAYER offers countless hours of visceral gameplay from one of the finest shooter developers in the industry – People Can Fly. A JOURNEY OF DEATH Humanity’s hope for survival rests on your journey deep into the cradle of Enoch’s civilisation. DYNAMIC 1-3 PLAYER CO-OP Play solo or join up to 2 friends in drop-in drop-out co-op as you take on the horrors of a hyper-evolved planet in an apocalypse. 4 UNIQUE CLASSES Create and customise your own Outrider and choose from 4 unique powerful classes each with its own deadly array of brutal abilities with Skill Trees and Pax Trees to further define your personal playstyle. GUNS & GEAR Customise and upgrade your Outrider(s) with countless combos of the most powerful Epic, Legendary and Apocalypse items with increasing damage potential. Gear can be modified with up to 3 mod slots allowing players to fully customise their loadout to match their playstyle. As well as a full and entirely free Transmog system across all items. POWER Adapt your abilities and skills across vast Class Skill Trees and Pax Trees for additional hybrid branch boosts. Challenge yourself against all Apocalypse Tiers with your burgeoning power and boost your Ascension Points of Brutality, Endurance, Prowess and Anomaly. ENDGAME Earn incredible loot as you dominate across endgame Expeditions or face new horrors in the ancient city of Tarya Gratar. BOOST IN Further develop your existing character(s) or use the new boost to roll a geared up level 30 Outrider, ready to jump start into the relentless action. OUTRIDERS INCLUDED The full experience of OUTRIDERS WORLDSLAYER includes the original OUTRIDERS game, with all the numerous quality of life improvements and Expedition content added since launch. 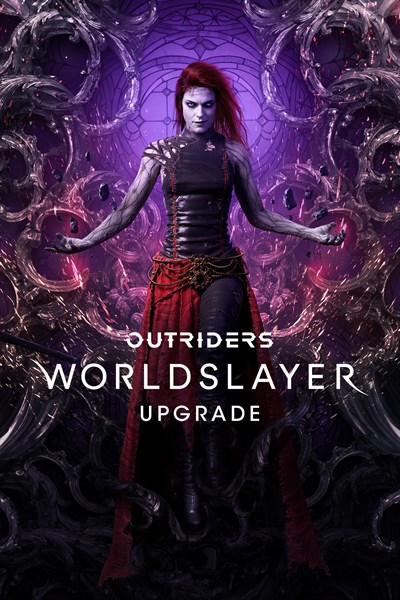 ☆☆☆☆☆ 78
★★★★★
$39.99 $35.99
Get it now
The WORLDSLAYER UPGRADE allows owners of OUTRIDERS to upgrade straight into the new WORLDSLAYER content. Take your existing Outriders to new levels of power as you journey deeper into Enoch, or use the character boost to create a new level 30 Outrider geared up and ready to face off against the powerful Altered – Ereshkigal. With new horrors to challenge you and new weapons, mods and gear to discover, you’ll be further developing your build through the new PAX hybrid branch class trees. Survive the campaign and you’ll face even greater horrors in the Trials of Tarya Grata, the brand new endgame. Which partnered with Ascension Points offers a new long term progression system for the most committed players. Finally, push hard through the new Apocalypse difficulty tiers, with each step up to level 40 increasing the chances of obtaining incredible Apocalypse gear and its game changing third mod slot. OUTRIDERS WORLDSLAYER UPGRADE FEATURES A JOURNEY OF DEATH Humanity’s hope for survival rests on your journey deep into the cradle of Enoch’s civilisation. DYNAMIC 1-3 PLAYER CO-OP Continue to play solo or join up to 2 friends in drop-in drop-out co-op as you take on the horrors of a hyper evolving planet in an apocalypse. 4 UNIQUE CLASSES Continue with your existing classes or create and customise your new Outriders. Choosing from 4 unique powerful classes each with its own deadly array of brutal abilities with Skill Trees and Pax Trees to further define your personal playstyle. GUNS & GEAR Customise and upgrade your Outrider(s) with all new and powerful Apocalypse items and mods. Apocalypse items have an additional 3rd mod slot to customise your loadout to match your playstyle. As well as a full and entirely free Transmog system across all items. POWER Adapt your abilities and skills in addition to the vast Class Skill Trees with new Pax Trees for hybrid branch boosts. Challenge yourself against all Apocalypse Tiers with your burgeoning power and boost your Ascension Points of Brutality, Endurance, Prowess and Anomaly. ENDGAME Earn incredible loot as you face new horrors in the vast endgame experience in the ancient city of Tarya Gratar. BOOST IN Further develop your existing character(s) or use the new boost to roll a geared up level 30 Outrider, ready to jump start into the relentless action. 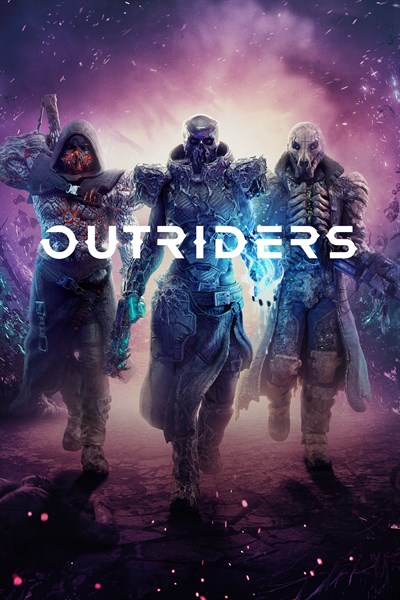 ☆☆☆☆☆ 699
★★★★★
$39.99 $31.99
Get it now
Xbox One X Enhanced
PC Game Pass
Xbox Game Pass
OUTRIDERS is a 1-3 player co-op RPG shooter set in an original, dark and desperate sci-fi universe. As mankind bleeds out in the trenches of Enoch, you’ll create your own Outrider and embark on a journey across the hostile planet. With rich storytelling spanning a diverse world, you’ll leave behind the slums and shanty towns of the First City and traverse forests, mountains and desert in the pursuit of a mysterious signal. Combining intense gunplay with violent powers and an arsenal of increasingly twisted weaponry and gear-sets, OUTRIDERS offers countless hours of gameplay from one of the finest shooter developers in the industry – People Can Fly. Game leverages Smart Delivery allowing access to both the Xbox One title and Xbox Series X|S title when available. Online only, no offline modes

☆☆☆☆☆ 349
★★★★★
Get it now
Take your first steps into a savage future in the OUTRIDERS Demo, and get a taste for the most aggressive RPG-Shooter in the genre. With all four classes available, and the first four brutal abilities from each, you can assassinate your enemies as the Trickster, incinerate them as the Pyromancer, punish them up close as the Devastator, or at range as the mysterious Technomancer. Play single-player, or with up to two friends, as you experience the prologue and opening hours of OUTRIDERS. NOTE: The OUTRIDERS Demo requires a free Square Enix Members account – allowing transfer of your progress, including your customized Outrider character, to the full game. Square Enix Members will also receive a free ‘Slick and Smooth’ in-game emote! The OUTRIDERS Demo also requires persistent online access. Game leverages Smart Delivery allowing access to both the Xbox One title and Xbox Series X title when available.