For as long as players have been exploring Two Point County, they’ve been asking the big questions, like “why can’t we go to outer space?” and “where do Cheesy Gubbins really come from?” Well, good news, fellow administrators. We’re answering both those questions in Space Academy, the first major DLC for Two Point Campus!

We’re here today with a look at the three brand new levels we’re introducing in Space Academy, plus a look at the courses you’ll be able to teach your budding astronauts. Studying humanities is much more fun when your classmates are aliens.

Once upon a time, Two Point County’s space program carried a moon-sized amount of respect. Now it’s more dilapidated than a Mars rover that forgot its batteries. It’s your job to spruce things back up at Universe City, starting with a new course on “Cosmic Expansion.” You’ll also be treated to a new variety of students, like the quirky Space Knights and Space Cadets. Thankfully these are red shirts that aren’t in mortal peril…yet.

Revitalize Two Point County’s space program and suddenly everyone will want a piece of that sweet, sweet moon cheese. At Cape Shrapnull, you’ll train students in intergalactic self-defense and diplomacy. At least one of those involves electrified batons.

The ultimate in dairy-based space exploration, and the first out-of-county campus! You’ll finally tutor the best in extraterrestrial students, including classic cone-headed aliens and the infamous “Cheese-Moongers.” These cheesy-skinned newcomers are constantly on the prowl for the secret ingredient behind Cheesy Gubbins, and boy oh boy are they going to find it in their new classroom: The Creamatorium.

So what will you be teaching when you’re not busy uncovering cheesy secrets? Here’s a rundown of some of the courses in Space Academy.

A field unconstrained by gravity and common sense. Astronauts flout traditional beliefs and float off into the ether. You may not like it, but you would say that, you’re probably a Capricorn.

For generations, Two Point citizens have looked to the stars and thought “I’m going to own that someday”. Thanks to alarming technological advances, that’s now a very real, unfortunate possibility. Head to the moon and back again for a level of personal discovery that most students could only hope to achieve metaphorically.

Countless alien civilizations have studied humanity during our relatively brief existence, but most have stayed at a safe and understandable distance, until now! Yes, alien students are tired of the hearsay, they want unfiltered, tepid humanity straight from the tap. I suppose we’re the experts, but where to start?

Aliens aren’t so different from us… they get tense when the phone rings and just love to gorge on cheese. They’ve already made a start harvesting the galaxy’s cosmic cheese. So grab a flag and let’s go… space is the next frontier for us to wring dry of its natural resources (mmm natural resources).

So whether you’re a green-skinned greenhorn or an experienced astronaut ready to blast off (again), check out Two Point Campus: Space Academy, available now! 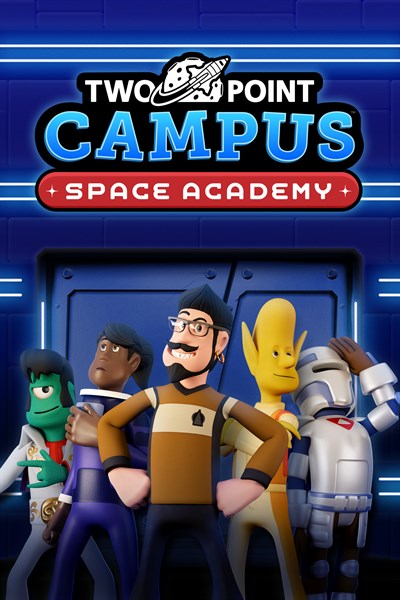 ☆☆☆☆☆ 4
★★★★★
$9.99 $8.99
Get it now
Welcome aboard space cadets, as we boldly go to Two Point County’s Space Academy! The Two Point space program is far, far away from its golden years, when rockets lit up the news and astronauts were semi-famous, like B-list actors you don't even recognise. And now the County has opened the doors to its fledgling Space Academy, Two Point needs your help on the front-lines of galactic defence, inter-dimensional diplomacy, promoting the space industry and preparing the County for foreign life. The aliens are coming; look busy. We’ve also discovered a cluster of those cheesy space rocks caught in the County's orbit. So we need you to set up Two Point's first out-of-County campus, source alien students from all around the galaxy, and teach them everything we know about us. Conditions may be harsh out here, but we're sitting on a gold mine. So dust off your moon boots, set phasers to fun, and get your students to reach for the stars… and their wallets. WHAT’S INCLUDED? 3 new campus locations 6 new courses with fully animated classrooms 6 new student archetypes 3 new events 1 new club And lots of new items NEW CAMPUS LOCATIONS Universe City – Revitalise the County's interest in outer space, one small step at a time. Cape Shrapnull – Take over Two Point's recently founded Space Academy and prepare for contact with aliens. Cheesy Heap – Attract students from across the galaxy to learn on the surface of a massive space rock. NEW COURSES Astrology – A field unconstrained by gravity and common sense. Cosmic Expansion – Use the latest aeronautical advances to build pointy space cars. Space Academy – Become confident in space from the comfort of wherever this is. Space Knight School – A nomadic offshoot of traditional (land-based) knighthood. Cheese Moongery – No one wants to see how the cheese is made. Humanities – Alien students are tired of the hearsay, they want unfiltered, tepid humanity straight from the tap. ALSO: • New Time Tourism Club – the latest invention from Captain Yesterday provides curious students all the entertainment of a school trip in the blink of an eye. • New events including Sci-fi Conventions, Space Battles and an out of this world gig act. 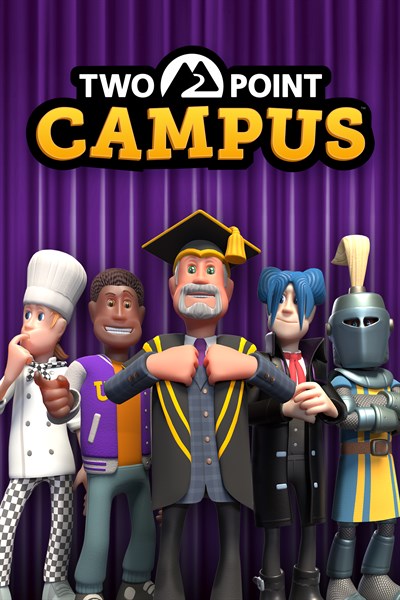 ☆☆☆☆☆ 112
★★★★★
$39.99 $31.99
Get it now
PC Game Pass
Xbox Game Pass
Take your simulation management experience to a class above with Two Point Campus, the sequel to the multi-million selling Two Point Hospital. Build your university, your way! It’s time to spin academia on its head! Got a yearning for learning? Or just keen to build an educational masterpiece? Two Point Campus is jam-packed with new creative tools to help you build the university of your dreams. For the first time, build on the outside as you develop a blank canvas of greenery into your own delightfully educational campus environment, housing the top teaching facilities in the land. Lay down pathways with new easy-to-use tools. Plant glorious collections of outdoor flora. Place benches and tennis courts. Build a Cheeseball arena, complete with stands. The only limit is your imagination (and your in-game bank balance). Not the usual fare But, of course, it wouldn’t be a Two Point game without a twist. Rather than typical academic fare, students in Two Point County enjoy a range of wild and wonderful courses: from Knight School (hey, we all have to learn jousting at some point in our lives), to the salivatory Gastronomy, where your students will build mouth-watering concoctions like giant pizzas and enormous pies. The academic year… is here! Take advantage of the opportunity to spend way more time with the little people in your university. The academic year begins with a summer break, giving you enough time to get everything looking great before your students move in. Build libraries, hire the best staff, kit your campus out with the best courses and watch the academic potential of your students get unlocked! Shaping the students of the future. But it’s not just work hard. Oh, no. It’s play hard, too. For your university students aren’t all bookish 24/7. You’ll need to keep an eye on their happiness and make sure they’re getting enough entertainment, pastoral care and general joie de vivre to develop into incredible individuals who will do the legacy of your university proud. Keep it classy!