Hey Xbox Wire, nice to meet you all. I’m Greg Louden from Convict Games and I’m here to talk about our debut, Stone. It’s an Aussie LGBT stoner noir interactive story that follows our koala private investigator Stone who wakes to find his lover has been kidnapped. You need to find out what happened.

As I wrote, we’re an interactive story, so super, super story driven. While playing, there’s constant reference-filled dialogue like a great hip-hop track and an eclectic soundtrack. So mechanically in the game you walk, talk, interact, dance, smoke, and drink. Some call it a Walking Sim; we like to call it an Interactive Story. We have one ending in Stone, so you don’t change the story with these choices, but rather you adapt it and make it your own.

To bring noir to 2019 and Xbox, it had to be hip hop, that to me is also about wordplay and Stone is filled with references and throwbacks. It’s also a genre with a set use in games, however we wanted to present it in a different way and bring my passion for the genre to storytelling in interactive stories.

The whole koala, anthropomorphic concept came from the fact that it’s a great metaphor; and in games we need to build everything. So why do we recreate the real world when we can create something new and something only games or CGI can do.

Stone is filled with licensed tracks and public domain cinema. I’m stoked with the selection and I think people will really enjoy the music and cinema we have available. We have Ryan Little providing our central hip hop vibe with Ilkka S providing our techno. On the Aussie side we have Luchii involved along with Grand Oyster Palace, Joseph Banks and Golden Grove on the Aussie rock front. In terms of cinema some players will watch some cinema like “Night of the Living Dead” and will be blown away, because all of these films are masterpieces that are now free for use.

Convict Games is a new Aussie remote story game company telling high impact and alternative stories. We’ve got talent from Moscow, Helsinki, Los Angeles, Sydney and Melbourne that have worked on our debut Stone. Convict was founded by my Co-Founder Sarah and I on July 5, 2017 and our motto is “Breaking free since 2017.” Which means we’re trying to do something fresh with our stories rather than follow others.

All of us who have worked on Stone like telling alternative stories. In games, those types of stories are very rarely played and usually you evade, attack and shield as mechanics. We wanted to push interactive storytelling further. Usually there’s the same sort of music too; we wanted to challenge that as well.

This is Stone and we’re Convict Games. 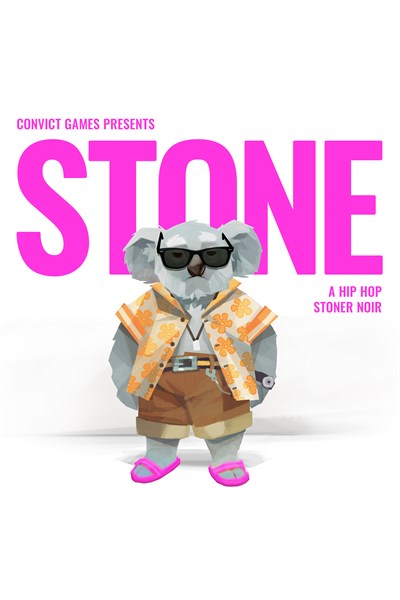 ☆☆☆☆☆ 35
★★★★★
$14.99
Get it now
Xbox One X Enhanced
G’day, I’m Stone. Here’s our Xbox page. Play this single-player third-person movie length interactive story and see what happened. Yeah it was rough, but a good life lesson. Enjoy, and remember don’t do this at home ya bunch of crazy animals. By the way this story really isn’t going to be for everyone. So enter at your own risk, mate. Plus this was created by a global team including the narrative designer of QUANTUM BREAK, CONTROL and VFX artist from GRAVITY, PROMETHEUS & more. You're in good hands, mate. P.S FLAMING FEATURE LIST BELOW. PLAY MY STORY TODAY! P.P.s I’m @StoneKoalaPI and follow @ConvictGames those mammals were crazy to tell my story! FLAMING FEATURES: • 3rd person so you can rotate a drone cam around me and move me like Voodoo • Deep, reference heavy interactive story never told, mate. • Drinking, dancing and smoking for your pleasure. • Map based free roam so you can explore the world at your own pace. Here’s some tips: • Echo for great techno, Smoky Possum for some liquid gold and my flat. It’s comfy mates. • A cast of my mates. Like Les, weirdo and kanye lover and my gorgeous chookie Alex. • BTW if you see Cockie, tell her I’m sorry again. If you see Devil, run, run, run! • Amazing licensed tracks from sick up and coming indie musicians at the Record Shop. • Like Ryan Little, Luchii, Ilkka S, Warchief, James Tottakai & More • Seriously the music is great. There’s hip hop, trap, stoner rock and heavy techno! • Also THERE”S CLASSIC MOVIES!!! Yeah you can watch film classics like • Sentimental Bloke, Night of the Living Dead & Story of the Kelly Gang ( CONVICT REPRESENT ) • Hang out with me. • It’ll be bonza and hell, I think you’ll be a better person from it too. Your mate, Stone