Hey, y’all!  It’s your second favorite Doink, Cullen, writing to you from the basement that Devolver Digital keeps me locked in. I wanted to tell you a bit about the design process of Gato Roboto which is available today with Xbox Game Pass.

Gato Roboto was always meant to be a smaller game, and because of that, we wanted to make sure we got the most out of every moment and discovery in the game. We decided that we would make a streamlined metroidvania, embracing the genre-conventions that we liked, and discarding the ones that seemed irrelevant to Kiki’s quest. We sat and thought as hard as our puny little brains would allow about what makes Gato Roboto what it is.

First, Gato Roboto is a game about being a cute, regular kitty who can pilot a mech. As such, we wanted to place as much emphasis as possible on the difference between playing as a cat and playing as a cat who is operating heavy machinery. Playing outside of the mech, Kiki can run, jump, (ironically) swim, climb walls, and fit into small spaces, however, she has no way of attacking enemies, and dies in one hit. Whenever you enter the mech, a crap-ton of heads-up-display UI rolls onto screen. The mech is larger and can’t fit through small spaces, can’t climb walls, and can’t go into water, but it does kick enemy ass and keep our adorable protagonist relatively safe. You now have an expandable lifebar, a gun, rockets, and more.

Speaking of the mech, our second design principle was to borrow classic and recognizable power-ups from the genre and throw a unique spin on them. Our rockets can destroy obstructions, yes, but rather than using ammunition, we use a heat-meter, which allows you to fire a couple rockets at a time, at risk of overheating, which forces you to wait a few moments for them to become available for use again. I’m particularly proud of our take on the double-jump, in which Kiki’s mech spins violently, dealing damage to enemies she collides with, and bouncing her into the air higher. The Spin Jump recharges a moment after colliding with an enemy, allowing you to use enemies like bouncy platforms.

Our third defining characteristic of Gato Roboto is that it’s a game that tries not to overstay its welcome. We wanted the pace to be fast, encounters to be surprising and funny, and new areas and abilities to be discovered constantly. If we ever got bored with a stage gimmick, we decided it was time to introduce another one. The stages in Gato Roboto are largely built around navigating through a stage-wide level gimmick, then that gimmick turning on its head, and re-navigating through the same stage with a new perspective. For instance, in the Aqueducts, you must explore your way to the bottom-most part of the region using a submarine to find drains that lower the water level, allowing you to bring the mech deeper and deeper. After draining the last of the water and defeating the boss, you must return through the dry version of the level with the mech, which presents a different set of challenges. Even though you might spend a good amount of time in the Aqueducts, we hoped that by changing up the environment, the dreaded water level wouldn’t overstay its welcome.

Gato Roboto is a fun and sometimes strange little game that we hold very dearly to our hearts. Hopefully this article gives you some insight into how and why the game turned out how it did! 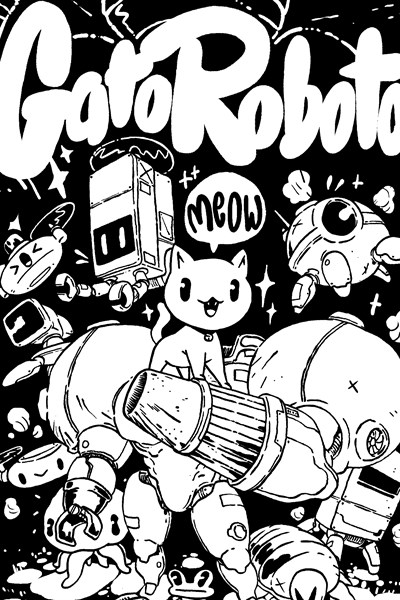 ☆☆☆☆☆ 174
★★★★★
$7.99
Get it now
Pounce inside of your cozy armored mech and set off on a dangerous trek through an alien underworld full of irritable creatures and treacherous obstacles in a valiant effort to save your stranded captain and his crashed spaceship. Tiptoe outside the friendly confines of your technological marvel and follow your feline instincts through tight tunnels and mysterious waterways to scavenge for new weapons and gear. Adventure awaits the most curious of cats in Gato Roboto!