Hi everyone! I’m rdein, lead creator of Minoria and the Momodora series. I’m pleased to say we have finally launched Minoria on Xbox One — thank you for your patience!

Minoria is Bombservice’s latest creation, a side-scrolling action game with a heavy focus on combat and exploration. It’s a game similar in style to my other series, Momodora, which was also released on Xbox One a few years ago, however we’ve taken the visuals to a new level with hand-painted backgrounds and cel-shaded characters. Players will have to master the ins and outs of combos, parrying, dodge rolls and magic attacks to progress through the game.

In Minoria, you play as Sister Semilla, a young woman working as a nun during a war against witchcraft that is ravaging the land of Ramzia. Together with her companion, Sister Fran, they must set out and do battle against a group of heretics known as Witches, discover their purpose, and uncover the dark secrets of the war.

As usual for the games I develop, the latest installment features some new ideas to spice up the experience and present a refreshing gameplay style. Although Minoria is technically not a part of the Momodora series, it is close enough that I consider it a ‘spiritual sequel.’ In comparison to the previous entry, Momodora: Reverie Under the Moonlight, Minoria features gameplay that more strongly resembles that of an action RPG — mechanics such as a levelling system, interchangeable equipment, parrying, and dealing counter damage, to name a few. Many concepts that originated in Momodora III and Momodora: Reverie Under the Moonlight were expanded upon in this game, so I hope veteran players will enjoy those aspects as well.

Since releasing the Minoria on PC last year, we’ve gathered various feedback from players and took steps to improve the game experience. This includes new weapons, new attacks, and many fixes to the game. I am pleased to say that all these improvements will be present in this Xbox One release. 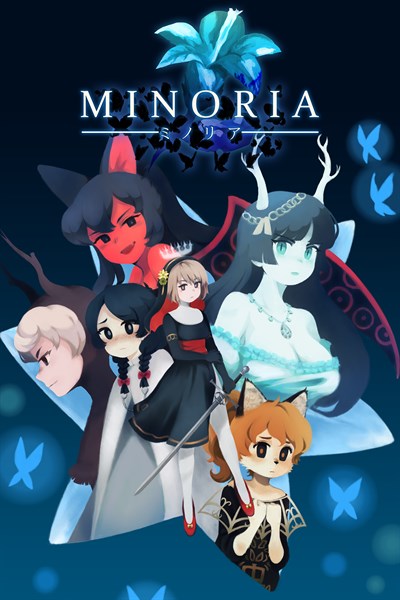 ☆☆☆☆☆ 29
★★★★★
$19.99
Get it now
Ink and blood stain the streets of Ramezia. Witches must burn and sins must be judged. Venture forth as Sister Semilla to burn down the pillars of heresy in Minoria, an action-platformer by the creators of Momodora. The story takes place during the fourth Witch War. It is a time of fanatical religious fervor. The Sacred Office, a powerful organization leading an Inquisition against heresy, purges the sinners who threaten humanity. Those responsible for conducting a mysterious ceremony that contradicts the rules of the Church are labeled “witches.” Now, Sisters Semilla and Fran, missionaries in the Church’s service, set out to thwart the witches’ ceremony and protect the common-folk from heresy that endangers the status quo. Minoria is the latest and most ambitious game from Bombservice and a spiritual sequel to the Momodora series. Fans of Momodora will find familiar aspects in the design and gameplay elements, as they master the ins-and-outs of parries, dodges, and a variety of different spells. Now in HD format, with aesthetics mixing 2D hand-painted backgrounds and cel-shaded characters, Minoria continues Bombservice’s legacy on consoles.