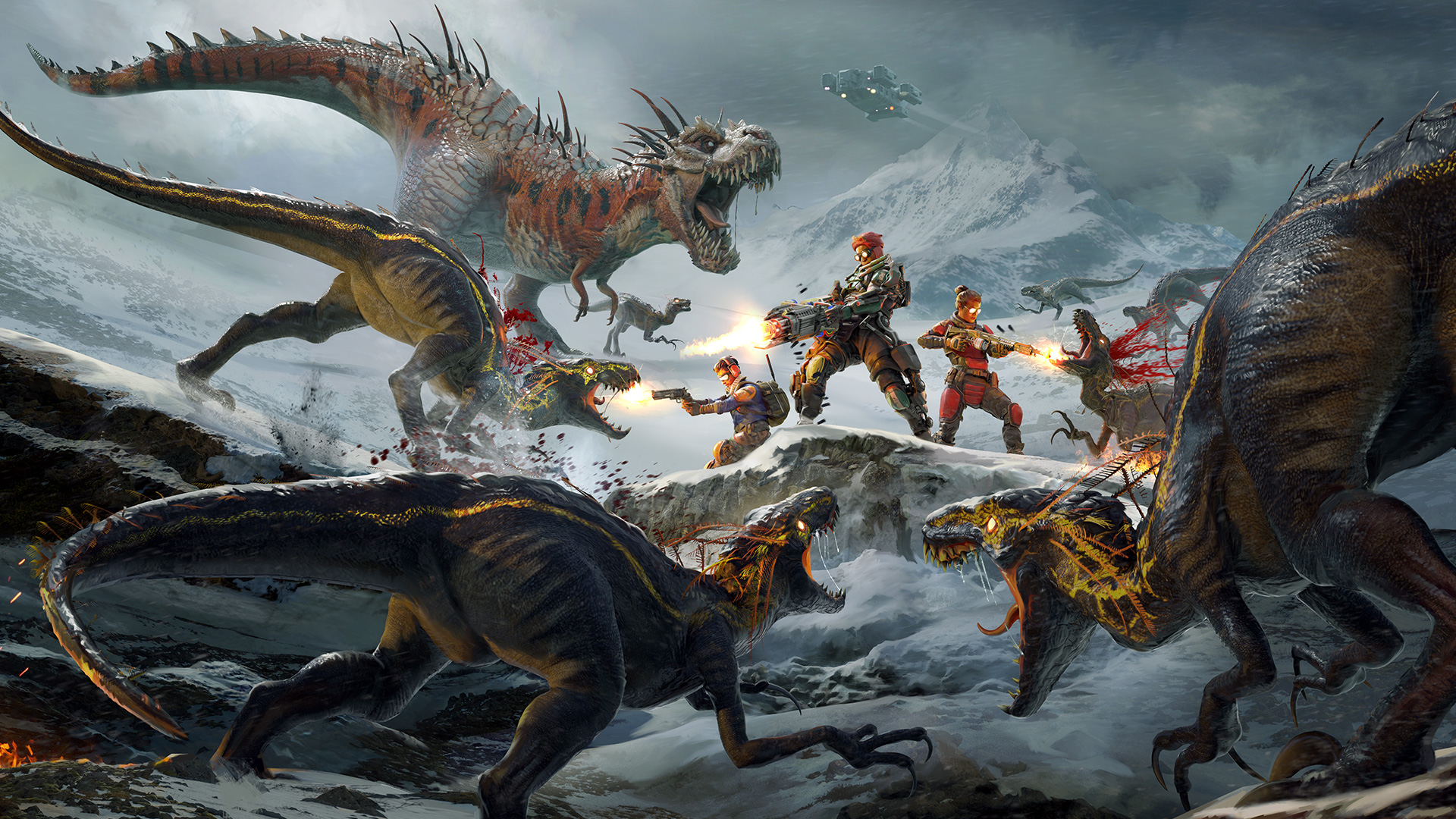 It’s finally time for players to join the fight and reclaim Earth from the mutated dinosaurs who currently rule in Second Extinction (Game Preview).

Having the game available today via the Game Preview program with Xbox Game Pass on Day One is beyond thrilling and will allow us to shape the game together with you as we move towards a full release. But before we throw you to the dinosaurs, here’s a few things that could be good to know.

How did we end up here?

The dinosaurs we all thought to be extinct have been lying nestled in the Earth’s crust for millions of years, resting and waiting for the perfect circumstances to arise. And when they did, they were fast and ruthless. Within hours, everything had changed. In the face of total annihilation, the directors of the Emergency Response Agency (ERA) organized planetary evacuations.

Now, years later, the human resistance has regrouped and is finally ready to fight back. Squads of survivors with relevant experience will be dropping back to Earth from orbiting space stations to gather essential resources, weapons, and information about the dinosaurs. And this is where you, our Extinction Elites, come in.

It’s worth mentioning is that Second Extinction is not a lore-focused game, but you will get clues and winks in the seasonal content on what has gone down and how the dinosaurs ended up becoming the mutated beasts they are. So, if that is something you fancy, keep an eye out.

Why 3-player co-op, you might wonder? Early in development, the team played around with different setups and ideas. What worked best was a 3-player squad, and so Second Extinction was designed with that in mind. That doesn’t mean you can’t drop down to Earth with only one friend joining or going in solo but do so at your own risk. It’s quite the challenge that deserves bragging rights if you survive, especially in the higher difficulty settings.

If I can’t talk you into bringing some backup when going planet-side, I recommend starting with Expedition Mode, where you can roam the map freely and can call in a dropship to get you when you’re ready to go back to safety.

We currently have five heroes who fit into three classes. We have our Troopers, the agile DPS class where we have the dashing Ortega and stealth sniper Jürgen. Next up, we have the Enforcers, our brutes, or tanks with the big and heavy guns only an exo-suit carrying hero can handle. Here you find Rosy and our newest addition to the lineup Jack. Finally, we have the Operators, the gadgety-class where we find our explosion and laser loving Amir.

Besides their different strengths, the classes also determine what guns that character gets to play with. For example, the Enforcers have the Rocket Launcher, and the Operators have the Grenade Launcher. Whoever you’re leaning towards, I recommend trying them all out to see what works best for you and your playstyle.

How does progression work?

Remember the Rocket Launcher? It unlocks at level 15. The more you play and gather research and materials, the higher level you will reach, and on the journey to the current max level of 25, you’ll unlock some rocking gear and weapons.

You can also use the research and materials you gather to upgrade and unlock weapon perks. Make sure you don’t avoid killing any dinosaurs you find challenging. They drop different materials, and the ones you need for the cool perks are, of course, on the rarer side, so be versatile in what types you kill. Or just kill all of them.

Below you can see the Scout Rifle skill tree. There are a set number of tokens that can be used and placed strategically so make sure to try different combinations and experiment to find what perks work best for you.

Where to speak your mind

As the community manager, I want to hear as many individual voices as possible to understand what the community thinks. To reduce the risk of your feedback getting lost and keeping it as efficient as possible, you’re invited to gather on our Discord server.

Since our Early Access release on Steam last October, our Discord has been the community’s base of operations. It is the place to talk to other players, ask questions, give feedback, and get in touch with the development team. We also have weekly challenges and a poll every Monday to get the community’s opinion on game-focused questions. It’d be greatly appreciated if you want to be part of the community to join our Discord and make your voice heard. If you’re interested in influencing what the future holds, this is the best way to make sure we hear you loud and clear.

See you on the battlegrounds and on our social channels!

☆☆☆☆☆ 371
★★★★★
$24.99
Get it now
Xbox One X Enhanced
PC Game Pass
Xbox Game Pass
Free Trial
This game is a work in progress. It may or may not change over time or release as a final product. Purchase only if you are comfortable with the current state of the unfinished game. A NEW BREED OF BIG MAP MULTIPLAYER SHOOTER The goal is simple: Reclaim earth. In Second Extinction you take on hordes of mutated dinosaurs with up to two friends. Solo players beware: Second Extinction is designed with squads in mind. Only the strong will survive. GAME PREVIEW IS JUST THE BEGINNING The goal of Game Preview is also simple: Work with our community to make the best game possible. We want to hear your feedback loud and clear, and we intend for our community to be a vital part of the development process. Even so, there’s plenty to get your teeth (and claws) into from day one: 4 heroes, 10 weapons (with 5 upgrade tiers each) and 6 missions – plus some special side quests – across multiple regions of our big map. JOIN THE WAR EFFORT, SHAPE THE FUTURE Our mantra is that players win battles, communities win wars. Nowhere is this more true than our War Effort feature. Each region of our big map has a unique threat level. This threat level can be lowered if enough of our players are successful in their missions and activities. But the dinosaurs aren’t resting either, and they’ll focus their efforts where you aren’t. Each week the community will see the fruits of their labors or feel the consequence of their incompetence. Let the threat level get out of control and you can expect an especially tough Emergence Event to be waiting for you. By playing Second Extinction you’re not just picking up another co-op shooter. You’re joining us on a journey as we shape the experience. Every piece of feedback and every mission you play matters. So what are you waiting for? The fight to reclaim earth starts here. Full details on the latest status of the game, how you can give feedback and report issues can be found at https://www.secondextinctiongame.com/