The year is 1984 and no one’s heard of a pair of Italian plumbers who eat magic mushrooms and go down sewers pipes in an attempt to save a damsel in distress. People have, though, been playing a boulder-based 2D puzzle-maze game on their brand new Atari system with its impressive 8-bit graphics.

Created by two Canadian developers, Peter Liepa and Chris Gray, Boulder Dash took the world by storm surpassing the excitement and speed of its predecessor Dig Dug and dazzled with its colorful animations for the time.

Fast forward nearly four decades, and Boulder Dash has become one of the longest running video game franchises with over 20 versions of the game, on over 20 different platforms, evolving over time to remain a fixture in the retro gaming space and in video game history.

Now, Boulder Dash Deluxe is available on Xbox One, Xbox Series X|S, and Windows 10, giving players a chance to experience video game development evolution first hand, level by level. It’s a time capsule that will take you back to an 8-bit world and snap you forward to present, allowing you to feel the limitations of gaming then to the vast expanses of development tools we have today to make these amazing products that can literally live on for decades.

As a teenager who flew to Japan with barely enough money to come back, just to see the mecca of video games at the time, never did I think that I would be able to make video games as a career but also be a part of Peter Liepa’s amazing creation and franchise that has lasted so long.

In this latest version, we invite players to explore the refreshed world of Boulder Dash with the game’s influential protagonist, Rockford, and dive headfirst into myriad new and exciting challenges. Players will dig through spectacular caves with modernized 3D elements while avoiding the perils of falling boulders! There’s no shortage of valuable gems to collect, and even more nefarious enemies to conquer along the way; discover treasure chests overflowing with rare collectibles and valuable power-ups as you plow your way through 180 new and challenging levels, 20 of them created by Peter Liepa itself.

It’s a slice of history, a maze of challenges and an absolute gem. We hope you check it out and keep the good times rolling with us for another decade! 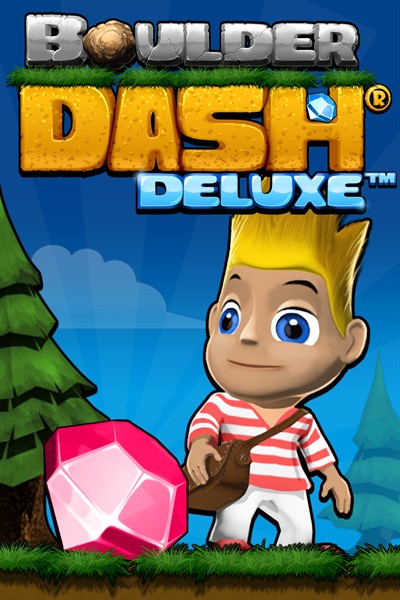 ☆☆☆☆☆ 5
★★★★★
$14.99
Get it now
Xbox One X Enhanced
THE retro game and legendary action puzzler for players young and more experienced alike arrived, combining up-to date-graphics with original game features – spanning 35+ years of Rockford™ and his friends, digging though caves to collect gems – Boulder Dash® Deluxe! Created by two Canadian programmers in 1984, Boulder Dash has become one of the longest running videogame franchises! The original Boulder Dash® is a pioneering interactive game dating back to the early times of the home computer and video game era. Its many sequels have delighted and challenged casual and hard-core players of all ages and sexes for over nearly four decades. Boulder Dash® Deluxe takes you, together with the game character called Rockford™ into a myriad of new and exciting challenges. Dig through spectacular caves with 3D elements; avoid falling boulders; collect valuable gems and avoid nefarious enemies along the way. Discover treasure chests with rare collectibles and strong power-ups. Boulder Dash Deluxe includes 180 new exciting and unique levels. Plus, dig through 9 brand new worlds with high-end graphics and their own textures, dive into the Classic 1984 World with its caves or enjoy The Liepa World; a set consisting of 20 of the most mind-bending levels designed by the creator of the original 1984 Boulder Dash version and video game legend Peter Liepa. And, if that’s not enough, you will be challenged by 15 new special opponents ranging from Octopus to Snow Tiger. Boulder Dash® Deluxe truly is the pinnacle in 35+ years of Boulder Dash®! While providing classic Boulder Dash® core gameplay mechanics and features, Boulder Dash® Deluxe introduces exciting new elements such as diagonal movement, which opens up new and intriguing puzzles while creating a very different and organic look for the caves. On top of legendary previous versions, Boulder Dash® Deluxe features include: • 180 all-new levels with advanced features! • Includes 20 levels from the original 1984 Boulder Dash version • 9 exciting, brand spanking new worlds with high-end graphics, having their own, unique textures, go to Macmarnua Sea or Urath Castle – or back in time to the Classic 1984 World with its caves • 15 new special opponents like Octopus, Shark Polar bear, and Snow tiger will keep your mind agile and you on your toes • The Liepa World, a premium world by videogame legend Peter Liepa who returned to the game he created 35 years ago with 20 of the most mind-bending levels yet! • Full character customization of your game character Rockford™, e.g. shirt, pants, shoes, eyewear, headgear, hair, and facial hair • Languages: English, Spanish, French, German, Italian, Portuguese, Polish, Russian, Japanese, Simplified Chinese, Traditional Chinese! Boulder Dash® is a trademark of BBG Entertainment GmbH, registered in the US, the European Union and other countries. Boulder Dash® Deluxe™, the names and likenesses of Rockford™, Crystal™ and Goldford™ are trademarks of BBG Entertainment GmbH. Boulder Dash® Deluxe™ Copyright © 1984-2021 BBG Entertainment GmbH. All rights reserved. The original Boulder Dash® was created by Peter Liepa with Chris Gray.