With the excitement of Halloween soon upon us, we have another treat to announce. Echo Generation is available now for Xbox One, Xbox Series X|S, Windows PC, and with Xbox Game Pass!

Remember that mysterious crashed spaceship in the Echo Generation demo? Now, you and your little sister can journey with companions to uncover this mystery and the strange happenings in Maple Town. Explore a vast voxel world, fight your way through scary monsters, and help your fellow neighbors while investigating what happened to your missing Dad.

Along with a ton of exploration and quests, we crafted a turn-based combat experience inspired by old-school Paper Mario. Collect comic books to learn over 30 new attacks and master a variety of minigames associated with each skill. Befriend pet companions, each with their own unique abilities and personalities. As your team levels up, you will encounter trickier enemies and gripping boss fights. Dodge those attacks or you might be in for quite a beating! Did we mention that you can play as one of nine different playable characters? Who will you choose to lead the fight for Maple Town?

Set in the year 1993, much of our inspiration for the game comes from pop culture and movies from that era. We looked at “The Goonies” and “Goosebumps” where a group of kids go on supernatural adventures to craft our take on this classic genre.

You may notice references to this through the poster homages in the hero’s bedroom, or think of “Tremors” when facing the rainbow Worm Boss. From trips to the video store, cassette tapes and treehouse hideouts, we want Echo Generation to reflect some of our own upbringings living in suburban Canada and capture the nostalgic spirit of growing up in a small town.

As you unravel the story of Echo Generation, make new friends, and claim victory in battle against challenging enemies, you’ll be able to unlock up to 50 achievements. A good rule of thumb for achievement hunters: Read the dialogue, item descriptions and take a look at the achievement icons for clues.

Our first voxel game Riverbond was released in 2019. Since then, we’ve been working hard on evolving the Cococucumber voxel art style, building higher resolution models in larger, more complex environments. You’ll explore a range of levels like the FST, the heart of the corporate conspiracy, and spooky graveyards with dancing skeleton cats, rendered with beautiful colors and atmospheric lighting. Experience the vibrant world of Echo Generation in 4K resolution at 60 fps on the Xbox Series X.

As creators, we’re moved by the fan response to our reveal announcement back in the summer of 2020 and watched many fun streams of the Echo Generation demo during The Game Awards festival. Since then, we’ve filled the world with more enemies, epic soundtracks and of course, some secrets. Can you figure out the secret dance button? Or find the Riverbond easter egg by the name of ‘Bob the Frog’?

It is our pleasure to finally share the full experience for all to dive into. Enjoy Echo Generation, out now for Xbox One, Xbox Series X|S, Windows PC, and with Xbox Game Pass. 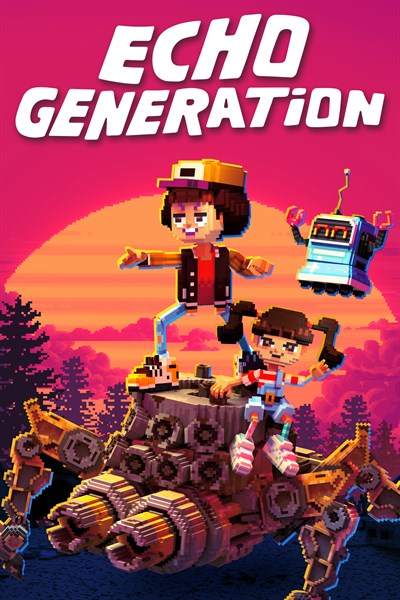 ☆☆☆☆☆ 169
★★★★★
$24.99 $19.99
Get it now
Xbox One X Enhanced
PC Game Pass
Xbox Game Pass
Echo Generation is a turn-based adventure game with a supernatural twist. Strange things are afoot in Maple Town: A mysterious crash leads you on a spooky adventure through your hometown. Battle monsters, complete quests and unearth secrets to reveal a conspiracy that transcends time. Active Turn-Based Combat Become a battle master and unlock your hidden potential by collecting over 30 Comic Books, each with their own unique minigames, skills and stat boosts. Gather Your Party Recruit adorable pet companions on your adventure and utilize their specialized skill sets to face enemies and bosses. Never leave your pets at home again! Explore and Uncover Secrets The folks of Maple Town are always happy to lend a hand as you complete quests and solve mysteries; some may unlock new paths or hint at a secret or two. Heartwarming Story Set in the 90s, Echo Generation has a heartwarming story about the supernatural, family and the nostalgia of growing up in a small town. Charming Voxel Art Style Immerse yourself in the stunning voxel art style of Echo Generation, the second title in the developer’s ‘Voxel Trilogy’ of games.