Seriously, What is a Dyson Sphere?

The game was inspired by an idea for a gigantic cosmic structure proposed by physicist Freeman Dyson in the 1960s: Imagine harnessing the immense energy of a star using a sphere that envelopes it, creating enough power to power entire civilizations. Even though the idea of Dyson Sphere is considered a hypothetical and impossible to materialize, a five-member indie game company, Youthcat Studio, has reimagined it for the virtual world.

OK, So Why Do We  Need a Dyson Sphere Here, in the Game?

If this is your first time to Dyson Sphere Program, let me introduce you what’s going on in the universe: in a distant future, the survival of an advanced human civilization will depend entirely on virtual computing, but the supercomputer responsible for their existence – the “CentreBrain” – is not able to handle the demands placed upon it due to a lack of electricity. You, as a space engineer, must control a light industrial Mecha named Icarus and build a Dyson Sphere to save the CentreBrain and the civilization that depends on it. Starting from humble beginnings, you will cut trees, mine, build small factories, lay down production lines, plan interstellar logistics, build an industrial empire that spans the galaxy, and finally, build your own Dyson sphere.

I’m an Experienced Player, What Can I Expect?

You can try out some new modes from our recent patch if you’re not new to the Dyson Sphere Program. As well as the classic factory automation management mode, we’ve also added a Minimal Resource Mode for an additional challenge and a Sandbox Mode so you can experience the later stages of the game quickly and freely. You can also take a step back and admire the galaxy lit up by global players in Milky Way and find your own twinkling light within the cosmos.

The Dyson Sphere Program‘s DIY systems are a must-see if you like creative works. One of them is the Dyson Sphere design system. You’ll see it when you get very close to the ultimate destination of the game. Unlike its namesake, your Dyson Sphere doesn’t have to just be a round sphere, you can build it in any shape you want:

Another DIY system available now is Mecha Customization. This system allows you to unleash your inner fashionista and customise your Mecha to your heart’s content, the only question is what colors and shapes are you feeling today?

What is to Be Expected in Future Updates?

As of now, Dyson Sphere Program is regularly updated with new features and changes, and we will continue to do so. But Dyson Sphere Program won’t stop there: The combat system is scheduled to launch in 2023, taking the game in a brand new direction compared to its current form. Players will face a hostile force with the ability to rapidly expand across the universe at frightening speeds: the Black Fog. Aside from maintaining the CentreBrain, players must also build defenses and arm the Icarus Mecha against enemy attacks. We are looking forward to the release of this update that our entire team is hard at work on.

There’s so much more to Dyson Sphere Program that awaits you, and we can’t wait to see you join our team of Dyson Sphere engineers! For more advice or to meet likeminded players, feel free to join our Discord community and start exploring the universe. 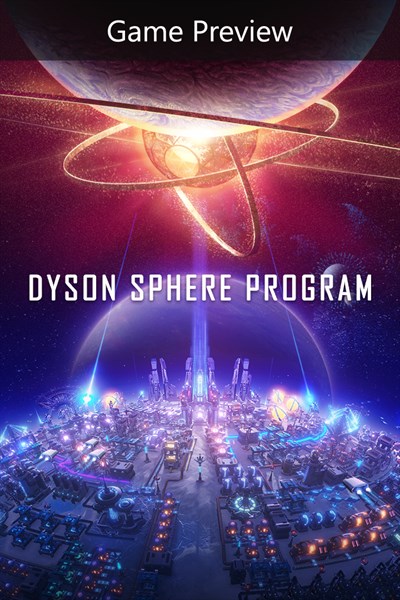 ☆☆☆☆☆
★★★★★
Get it now
PC Game Pass
This game is a work in progress. It may or may not change over time or release as a final product. Purchase only if you are comfortable with the current state of the unfinished game. Dyson Sphere Program is a sci-fi simulation game with space, adventure, exploration and factory automation elements where you can build your own galactic industrial empire from scratch. In the distant future, the power of science and technology has ushered a new age to the human race. Space and time have become irrelevant thanks to virtual reality. A new kind of supercomputer has been developed – a machine whose superior artificial intelligence and computing capability will push humanity even further. There is only one problem: there isn’t enough energy in the whole planet to feed this machine. You are a space engineer in charge of a project launched by the space alliance COSMO, tasked with a massive undertaking: constructing Dyson Spheres (a megastructure that would orbit around a star, harnessing all its power and energy) to produce the energy that humanity needs. Only a few decades ago, Dyson Spheres were considered a hypothetical, impossible invention – but now it’s in your hands… Will you be able to turn a backwater space workshop into a galaxy-wide industrial production empire? Full details on the latest status of the game, how you can give feedback and report issues can be found at https://twitter.com/DysonProgram