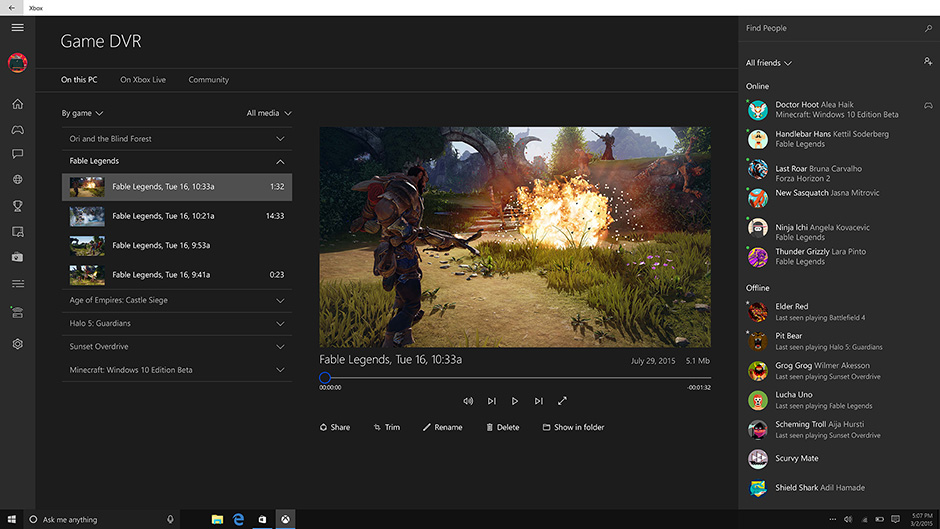 One of the extremely handy new features of Windows 10 is Game bar, a built-in tool that allows players to record videos of their favorite PC games (and beyond just games, it generally makes a great screen recorder and video capture tool for non-protected content, too!). The footage can be easily uploaded to assorted social networks, or kept locally on your own machine to share with friends.

To open the Game bar while playing a game, press Windows + G, and it will be unobtrusively superimposed over the game you’re playing. With some games that run in full screen mode, you may not see the Game bar appear when you press Windows + G. You can usually still record gameplay in this case, just use the hot key combination Windows + Alt + R to start recording, and then Windows + Alt + R again to stop recording. Your screen may briefly flash to indicate recording has started or stopped. Or, if you prefer, try setting your game to windowed mode if you want to make sure you can see Game bar.

To record a video, simply open the Game bar (by hitting the Windows + G), and then click the red Record button. A timer will show up in the top-right corner of the game window; to stop recording, bring up the Game bar again and click the red Stop button. It’s really that simple!

To quickly take a screenshot, bring up the Game bar and click the Screenshot icon at the center. This has a keyboard shortcut as well: Windows + Alt + Print Screen.

Conveniently, these videos and screenshots can also be accessed from the Xbox app. Just open the Xbox app from your Start menu, and click the Game DVR icon. A list of all your captured screenshots and videos will emerge under “On this PC,” and you can view, watch, and share them with your Xbox Live friends from within the Xbox app.

The Game bar and Game DVR settings are controlled from within the Xbox app. You can either access the setting directly from the Game bar to be taken there or open the Xbox app, click the Settings icon, and then select Game DVR to customize them.

You can do things like disable the Game DVR entirely, or set different keyboard shortcuts for the various bits of functionality. You can also specify the folders where Windows 10 will save videos and screenshots, as well as choose different video quality and resolution settings. Audio is recorded alongside gameplay by default, but you can adjust the audio quality (or choose to not record audio at all).

As is the case on Xbox One, Windows 10 can automatically record gameplay in the background, allowing you to instantly save gameplay clips after they happen. To use this feature, head to the Xbox app and enable the “Record in the background while I’m playing a game” under Game DVR settings. System resources will be allocated for this; if you’re running an older system, you’ll want to keep an eye on it. To save the last 30 seconds of gameplay, simply open the Game bar and click the second icon from the left, or press Windows + Alt + G.

Finally, when you’re ready to share your videos and screenshots with the world, simply upload them from your VideosCaptures directory to social networks like YouTube, Vimeo, Instagram, Imgur, or your online media-sharing platform of choice. Videos and screenshots of Windows Store games can also be directly uploaded to your Xbox Live activity feed or sent in an Xbox Live message by clicking the “Share” button in the Xbox App.  Soon, everyone will know your greatness!