If you’re like us, you’re excited about booting up Age of Empires: Definitive Edition available now on Windows 10. Perhaps, like some of us, your Age skills have gotten a bit rusty. Or maybe you’ve never played the classic real-time strategy game at all! Not to worry: the Age of Empires: DE team put together a quick primer to help you come out on top in this celebration of gaming history.

There are three ways to win Age of Empires: Definitive Edition:

Conquest is the most common victory type, as ruins are hard to keep continuous control of for 2000 years and wonders are very expensive to build. Age of Empires: DE has a variety of game modes: single-player, campaign, and multiplayer. For now, we will focus on setting up single- and multiplayer matches: 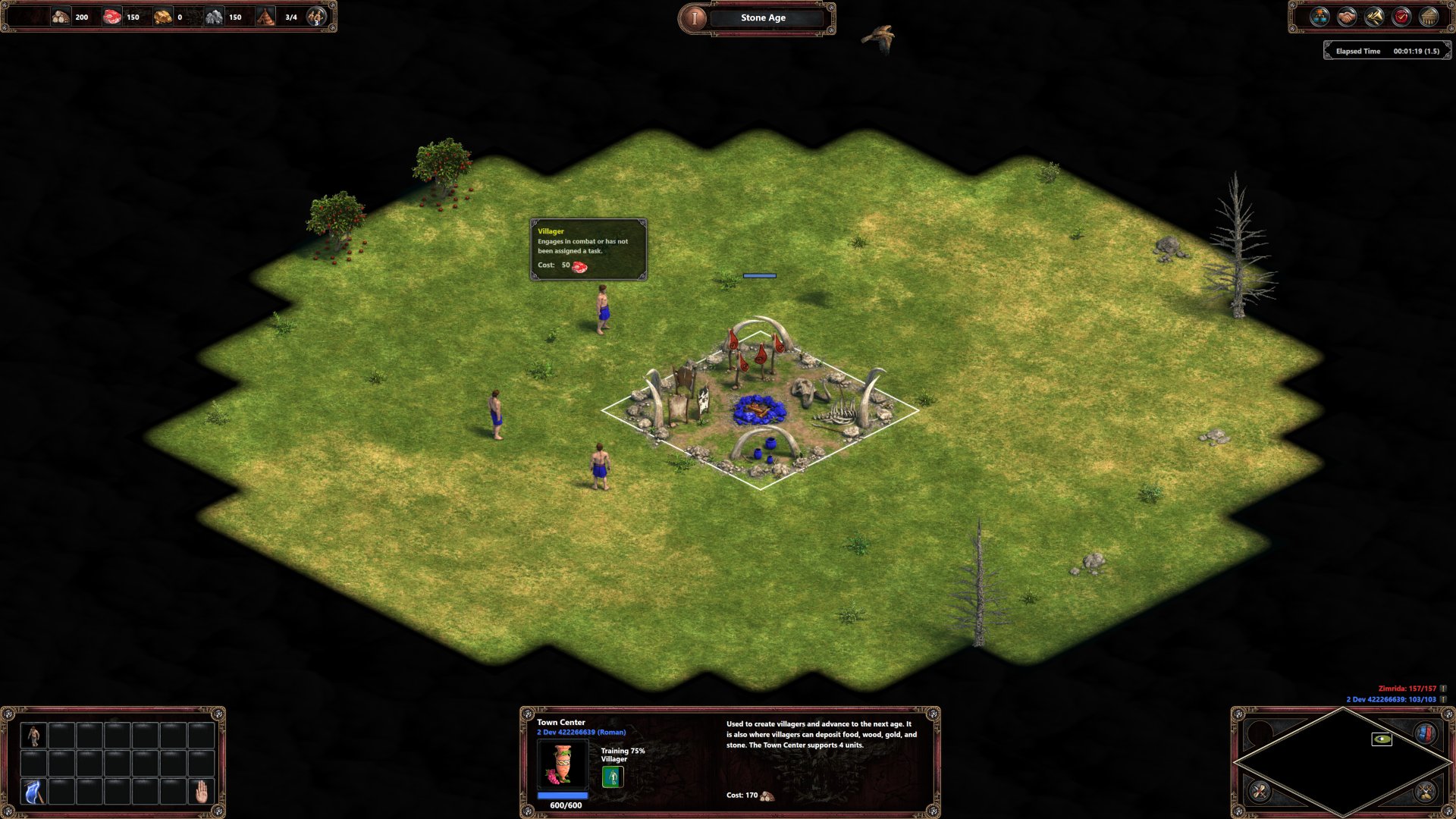 Starting Your Game Off Right

Your starting resources
Each player begins a match with one Town Center and three Villagers. They will also start with a standard number of resources. Players will also be able to view their current population, their population limit, and number of idle Villagers. All this information is visible in the upper-left corner of the screen:

The first four things to do in every match: Resources
As is the case with other Age games, you will be tasked to collect four resources: wood, food, gold, and stone. These resources can be spent on buildings, upgrades, and military units to expand and improve your empire.

Advance Through the Ages
In Age of Empires: DE, you expand and improve your empire by catapulting your culture to the next technological Age. You begin in the Stone Age, but once you’ve stockpiled 500 Food, you can go to your Town Center and enter the Tool Age, which gives you access to substantially better units and technology.

Villagers
Villagers are the backbone of your economy. They are the only units that can build buildings, and they are the primary resource gatherers. Every Villager costs 50 Food, making food the most important early game resource. Only one building, the Town Center, can create Villagers, so it’s important to keep your Town Center actively making Villagers at all times. Generally speaking, the player with the most Villagers will win the game.

Military
Military units can be produced from the Barracks, Archery Range, Stable, Siege Workshop, Dock, and Academy. Each unit has specific strengths and weaknesses against other military units. Use Scouts to check what your opponent is building and create units that exploit the enemy’s weakness! Storage Pits
Always try to place Storage Pits near two resources. These can be used as drop-off points for any resource except food from farms or berries. Your first or second building should always be a Storage Pit near trees and a huntable food resource like gazelle.

Age-Up Quickly
It is generally best to get into the Bronze age (the third age) as quickly as possible. Bronze age gives access to powerful units like the Chariot Archer, Cavalry, and Stone Thrower, while also letting you build a second Town Center for even faster Villager production. Players that remain in the Stone or Tool age too long will struggle to defend themselves.

Play to your strengths
Each civilization has a particular area of strength. Knowing yours is key to victory! For instance, most Roman armies rely heavily upon Swordsmen to take advantage of Rome’s +33% attack advantage, while many Assyrian armies will make use of their Archers’ 25% attack speed bonus. Use the in-game tech tree to learn about your civilization’s strengths!

Protect your Villagers
Villagers are the most valuable units in the game but are weak. Early rushes rarely destroy an opponent outright, but often can kill a few Villagers, leaving a lasting economic dent. Scouting and building early defensive structures are the best ways to keep your Villagers safe and productive. Find multiple sources of food
The more sources of food a player can find early on, the more stable their economy will be in the event of an attack or exhausted resources. Berries and hunting sites can exhaust quickly. Scout and be prepared to move your villagers to a new food location to avoid idle time.

Keep an eye on housing
There are few things more frustrating than getting “housed,” where your Villager and military production ceases because you have hit your population limit. It is important to make sure that you are building Houses along with your expanding population, so you can continue producing Villagers and military units.

Fish if Possible
Fishing is an excellent way to get food, especially in the early game. It is a good idea to spend stockpiled wood on docks and fishing boats to improve food income. Advanced players will build Fishing Boats while advancing between ages to continue expanding their economy.

Idle Villagers
Clicking on the idle Villager icon (hotkey .) will select an idle Villager and center the screen on them. Keep an eye on your idle Villager count throughout the game to make sure your economy is running at maximum efficiency.

Upgrades
Once you age up, new upgrades for your economy and military become available at the Market and Storage Pit, and defensive technologies are available at the Granary. These are extremely valuable and will provide a significant power boost to your economy, so grab them as quickly as possible.

We hope you find all this information useful. We’re so excited for you to have a chance to play Age of Empires: Definitive Edition, available now on Windows 10.