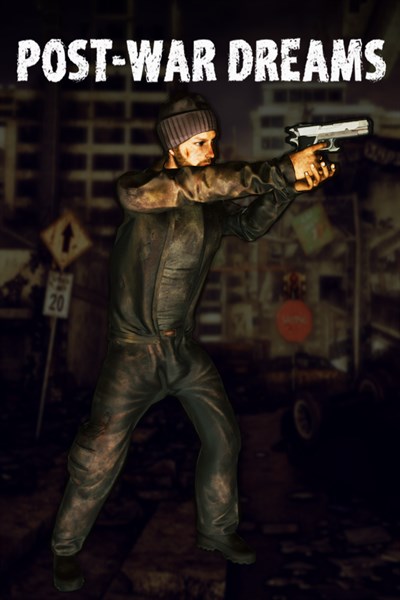 ☆☆☆☆☆ 7
★★★★★
$12.99
Get it now
POST-WAR DREAMS is a 2.5D Story-Rich, Side Scrolling Action Game, set in the wasteland of USA, plagued with constant war. Following the collapse of the economy, government, and society, you must brave heavily armed militia, lawless gangs, dangerous streets, desolate buildings and underground bunkers on your quest to escape this post-apocalyptic wasteland alive. The road to a new life is paved with danger, hope and constant reminders of everything that’s been lost. You will engage in combating the gangs and militia in order to survive and may choose to help other survivors who are full of their own personal misery, hopes and dreams, where everyone is trying to see the next sunrise in this chaotic wasteland. SUMMARY The United States has broken, and violence fills the streets. Freedom and patriotism have disintegrated, replaced with war and famine, and life is only a reminder of what’s been lost. If Garrett Mitchell hopes to survive this new world, he’ll have to fight his way through dangerous militia soldiers and members of the ruthless gang The Remnants while deciding whether or not to help his fellow survivors. Following years of mounting tensions within the United States, civil unrest caused Washington DC to shut its doors and borders to the rest of the world six short months ago. As lawlessness took over the Midwest, spreading from coast-to-coast, the financial system crashed and soon DC and the surrounding cities became a fortress for the privileged with the rest of the country left to fend for itself. Now, the streets run red with the blood of innocents as militia, gangs and rogue soldiers use lethal means to secure food, water and supplies that will allow their societies to keep going. For those civilians caught in the middle, each day is a fight for survival. As supplies dry up, these neutrals flee from the cities in hopes of starting over somewhere new. Holding onto a shred of hope, all the civilians have left are the clothes on their back and their post-war dreams. Players are introduced to Garrett, their mysterious vehicle through the wastelands of the United States. In the months since society’s collapse Garrett has done all he can to survive, dodging soldiers, gangs and other civilians, but with food, water and other survival resources scarce, he must find his way out of the city if he wants to live another day. Just as Garrett believes he can exit the city scot-free he’s waylaid by enemies and rescued by Kara, a former EMT (emergency medical technician), who is trying to lead her own group outside the city limits to probable safety. Her group is made up friends, neighbors, co-workers as well as strangers she’s encountered along the way. While Kara has medical training and cunning, which have allowed she and her group to survive the weeks since the war began, they lack combat skills and Garrett is a logical choice to help ensure everyone’s survival. The player may choose to help Kara and her friends or go it alone, with the impacts of the decision coming into view as the first few levels progress. Whatever the course, the player will ultimately end up a part of Kara’s caravan whether reluctantly or by choice. While Garrett’s fellow travelers will be excited to learn more about their new compatriot, the player may choose to not be as friendly or forthcoming. As the levels continue on and Garrett is exposed to different backstories, his successes or failures may also lead to the deaths of those he finds himself growing closer to.