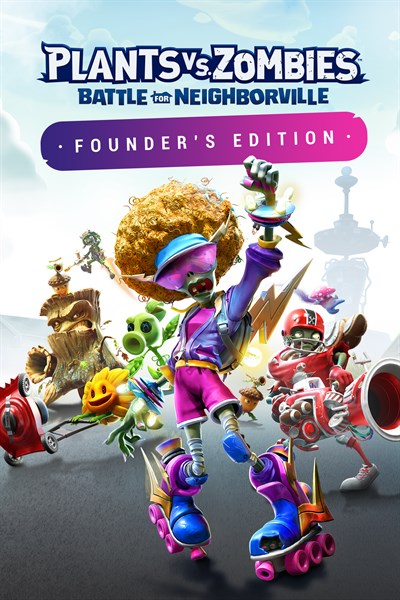 ☆☆☆☆☆ 1822
★★★★★
Get it now
Welcome to Neighborville, where all is well. Except that a crazy new coniferous conflict between brain-less and botanicals is brewing. Join us as a Founding Neighbor in this early edition and be a part of the community that battles for Neighborville ahead of worldwide launch! With the Founder’s Edition, you’ll play through six weeks of weekly content releases as we progress towards worldwide launch on October 18. Earn exclusive rewards for the first four weeks when you log in*, become part of the Founder’s community, and help make Plants vs. Zombies: Battle for Neighborville better for all just by playing. It’s a no-brainer! You also get to be one of the first on your block to experience the game – even Zomboss will be jealous when you tell him. Over the six weeks of content drops you’ll enjoy 20 fully customizable character classes in one social region, three free-roam regions, one PvE mode and six PvP modes, including Battle Arena, with split-screen couch co-op in every mode. How do you become a Founding Neighbor? It’s simple: – Get the digital-only, Founder’s Edition – only available for purchase from September 4 – 30 – Play through six weeks of fresh content drops from September 4 – October 17, with your progress rolling over to the standard edition of the game – Enjoy the same content as the Standard Edition product on October 18 at no additional cost For more information about Founder’s Edition, http://x.ea.com/59285. *Starting September 4, 2019 and ending on September 30, 2019, one reward available per week. Must login on a weekly basis to redeem rewards.