My co-developer Florian and I started working on ScourgeBringer two years ago (or 100 weeks and 567 pizzas ago, to be precise) and can’t wait to finally get it in the hands of Xbox Game Pass for PC players!

ScourgeBringer is a fast-paced, free-moving rogue-like platformer that aims to channel the rawness of an early rogue platformer with fluid controls, aerial combat, and detailed pixel-art graphics. It also got a punchy soundtrack from Joonas Turner who helped on the music from some of our favorite action indie games like Downwell, Broforce, and Noita.

Set in a post-apocalyptic world where a mysterious entity wreaked havoc on all humanity, ScourgeBringer puts you in the shoes of the deadliest warrior of her clan: Kyhra. Help her to explore the unknown and slash her way through ancient machines guarding the seal of her past, and maybe the redemption of humanity.

There is no backtracking, as the game structure follows a procedural combination of pre-built challenge rooms, not unlike Binding of Isaac. You can also expect cool power ups, a shop to upgrade your skills, nasty bosses and three different game worlds to explore (with more to come!).

To make ScourgeBringer, we took inspiration from our favorite indie action games and integrated suggestions and feedback from the community through various alpha tests. Then we kept expanding over the last two years to make something super unique that we’re really proud of. And this is just the beginning!

The current Xbox Game Preview version (the full release is coming later this year) will offer all the core game mechanics and roughly half the content of the final game, but we still got a lot of surprises coming. Further game worlds, weapons, bosses, skills and quality of life improvements will be added over the coming months and as always we plan to listen very closely to player feedback – so we will probably end up adding a lot of other cool things that even we don’t know about just yet!

To all our alpha testers: thank you from the bottom of our heart. We will still continue to collect and consider feedback throughout our journey over on our Discord. To all the new players that join us with Xbox Game Pass for PC: We can’t wait to continue rocking the development of ScourgeBringer and hope you’ll continue with us on this awesome rockin’ journey. 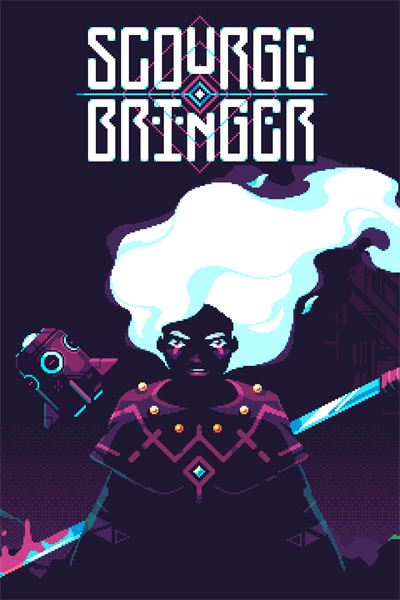 ☆☆☆☆☆ 171
★★★★★
$16.99
Get it now
Free Trial
From the developers of NeuroVoider, ScourgeBringer is a fast-paced free-moving roguelite platformer, much like a crossbreed between Dead Cells and Celeste. Set in a post-apocalyptic world where a mysterious entity wreaked havoc on all humanity, ScourgeBringer puts you in the shoes of the deadliest warrior of her clan: Kyhra. Help her to explore the unknown and slash her way through ancient machines guarding the seal of her past, and maybe the redemption of humanity. – Get the raw feel of a metroidvania through a fast paced rogue-lite – Slash and shoot your way smoothly with super fluid platforming controls -Sharpen your skills with a frantic combat system focused on attacks only – Dash forward to the otherworldly adaptive sounds of Joonas Turner (Nuclear Throne, Downwell, Broforce…) – Defy hordes of unspeakable enemies and giant bosses holding the secrets of the Scourge – Explore the infinite depths of an ever-changing dungeon – Uncover mysteries and find mementos of previous explorers to unlock reality defining secrets