Craig from Studio Wildcard here, and I’m super excited to be talking about Ark: Genesis Part 1, our newest expansion to Ark: Survival Evolved. We’re adding a whole bunch of new gameplay elements, and giving each survivor their own personal companion: AI construct HLN-A.

We’re always exploring different ways to convey the story of the Ark universe and we think HLN-A is a great step in a new direction. The fantastically talented Amber Lee Connors reprises her role (sort of) as Helena and brings her wonderful charisma and snark to the role. She acts as a vessel for us to deliver story more directly to the player and as the catalyst for the all-new mission system. HLN-A stays with survivors every step of the way, helping them explore the new biomes and guiding them through missions with cheeky hints.

Speaking of missions, these are new ways for survivors to experience the Ark universe. In addition to the traditional Ark gameplay, missions give players a way to experience Ark in a more directed and objective-focused way. No spoilers on what those missions are, though. You’ll find them in the Genesis simulation.

Ok, one spoiler… my personal favorites are probably the races. They may not be the truest test of a survivor’s Ark skills, but the dev team’s races got pretty heated whenever we played them, and there were more than a few rematches demanded.

It’s not just the gameplay that we’re pushing the boundaries on. The creatures found in the Genesis simulation are like nothing survivors have seen before. I have a soft spot for the Spooder, I mean BogStrider… I mean Bloodstalker. We have like 30 names for it (good luck finding out how to unlock them!). Most of the new creatures bring something crazy and new to the game, from the Bloodstalker’s ability to webswing across terrain to the Space Whale’s warp jump.

All these abilities will help survivors explore the crazy new environments in Ark: Genesis Part 1. Because the Genesis simulation is supposed to prepare survivors for the most extreme possibilities, each biome is incredibly different from the others, and requires considerable preparation. The Arctic and Swamp biomes ease players into this, and the Volcanic and Ocean biomes really start testing survivors. By the time survivors make it to the Lunar environment, they must deal with radiation, lower gravity, and an almost complete lack of food and water!

As much as I’d love to talk about where the Ark story is going, I have a bad habit of dropping spoilers. Nobody wants that, but what I can say is that once you finally get to the end of ARK: Genesis – Part 1, you won’t be able to wait for the next chapter! 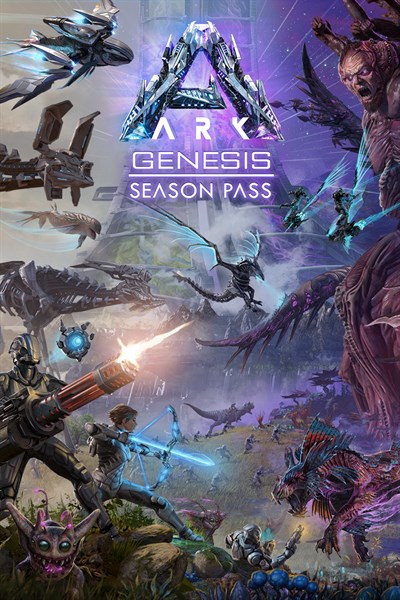 ☆☆☆☆☆ 251
★★★★★
$34.99 $31.49
Get it now
Your quest for ultimate survival is now complete with the ARK: Genesis Season Pass, including Part 1 and Part 2! In these expansions, you’ll conclude the ARK storyline while adventuring through exotic new worlds with all-new mission-based gameplay. Discover, utilize and master new creatures, new craftable items, weapons, and structures unlike anything you have seen yet! The saga is now complete, and hundreds of hours of new story-oriented ARK gameplay await you! This Season Pass gives you access to two new huge story-oriented expansion packs — Genesis Part 1 and Genesis Part 2 — as well as a 'Noglin' Chibi cosmetic, a ‘Shadowmane’ Chibi cosmetic, a new cosmetic armor set, and an in-game, artificially intelligent companion called ‘HLN-A’ who can scan additional hidden Explorer Notes found throughout the other ARKs. In Genesis Part 1, you awake up within a virtual simulation, you must survive in a world unlike anything you’ve seen before! ARK: Genesis represents a new, story-oriented beginning in ARK’s epic saga of survival. With a strangely familiar companion, you must overcome the simulation’s rigorous tests. Only by fighting, building, taming, and exploring will you uncover the secrets behind this forbidding place. In Genesis Part 2, you’ll emerge into a vast new physical world teeming with strange biomes and exotic creatures, while engaging in extensive story-oriented missions that test your mettle, ingenuity, and survival skills. Wielding an array of powerful new tames, items, weapons, and structures, you’ll journey from idyllic fields through twilit phantasmagoric realms, all the way into a literal hellish heart of darkness. Thousands of years and trillions of miles away from where your story began, you’ll challenge series-villain Rockwell in a final confrontation to determine the fate of humanity. The future is in your hands, Survivor — one last time! NEW STORY-ORIENTED MISSIONS A holographic guide, HLN-A, offers a wide array of missions at varying difficulty levels, for you to tackle at your own pace. Completing missions earns you new map-wide bonuses and Hexagons, which you can spend for extra resources, additional Engram Points, TEK items, travel between environments, and more. Discover hundreds of Explorer Notes, and Environmental Cues throughout the world to learn even more about the history of the ARK saga. EXPANSIVE WORLDS TO CONQUER ARK: Genesis features beautiful biomes ripe for exploration. In Genesis 1, the simulator tests your mettle across fetid alien bogs, deep undersea trenches, frigid mountain peaks, dangerous volcanic hellscapes… and even the wild low-gravity surface of an alien moon. Conquering each area requires preparation, smarts, and the ability to improvise so that when a volcano rains fire from the sky, an avalanche buries you, or a whirlpool pulls you into the briny deep, you’re ready to meet the challenge! In Genesis 2, you’ll emerge from the simulation into a gargantuan starship filled with unique biomes, including beautiful elysian fields, an exotic twilight realm of highly evolved lifeforms, the depths of outer-space, and even the innards of the ever-expanding Rockwell himself. Each biome presents unique hazards, but also opportunities to acquire new resources and creatures — including the powerful new ‘Mutagen’ that enables you to further evolve your existing tames! STRANGE NEW CREATURES The environments may be dangerous, but that’s nothing compared to the new creatures who call ARK: Genesis home. In Genesis Part 1, you’ll encounter web-spinning spiderlike beasts, cute-but-deadly shapeshifters, sea turtles the size of islands, and lava lizards that act as living forges. Plus, who doesn’t want to fly around on an immense hyperspace-capable space whale? In Genesis Part 2, you’ll find the brain-controlling Noglins, elegant high-tech Stryders, the cuddly mobile-nursery Maewing, and even the laser-shooting, bomb-blasting, barrel-rolling Astrodelphis starfighter — among other fantastical new creatures and evolved R-Variants of old favorites! You’ll need all the help you can tame, as both Genesis expansions present you with challenging new bosses and minibosses that will take all of your skills to conquer. POWERFUL NEW GEAR As you brave the many dangers of ARK: Genesis, you’ll gain access to powerful new tools to aid you. In Genesis 1, you’ll wield weapons like combo-capable plasma claws and remote-guided cruise missiles. Make tools from fishing nets to mining drills, or new vehicles such as hover-skiffs. Build interactive structural elements such as pressure plates, alarm systems, jump pads, ocean platforms and more. In Genesis 2, you’ll learn how to place remote cameras, pull off tricks with a floating skateboard-like Hoversail, take care of your eggs with the high-tech Incubator, shoot arrows made of pure energy with the Tek Bow, even engage in a Real Time Strategy command mode within the new ExoMek — and far, far more. Whether you’re a go-it-alone survivalist, a weapon-making warmonger, or a base-building architect, these expansions have a crafting project suited for you. COMPLETE YOUR JOURNEY ARK: Genesis Parts 1 and 2 together conclude the epic saga of ARK: Survival Evolved — the ultimate battle between the freedom to evolve, versus the oppression of controlling life’s creation. Which side wins out is up to you, Survivor. Your skills, your tames, your weapons and your builds — everything that you’ve accomplished is put to the test here, as the future of humanity hangs in the balance!