Have you ever wanted to pilot a heavily armed hovercraft while commanding a squad of ground units with special abilities? Well, we’ve got a game for you: Disintegration. And the best news? You can play it for free this weekend on Xbox One, from July 30 to August 2. Pilot a Gravcycle and command your crew in Disintegration, an aerial tactical shooter from our team at V1 interactive. And if you dig it, add it to your library at a discount, because Disintegration is on sale this weekend at a 40% discount!

Before we get into Disintegration the game, I’d like to introduce you to the Disintegration team. We’re V1 Interactive, a small independent studio of about 30 people located in Redmond, Washington. Our studio head, Marcus Lehto, should be familiar to many of you reading this: he’s the co-creator of Halo and the guy who designed Master Chief. After a great run with the Halo series, and some early work on Destiny, Marcus left Bungie years ago to start his own studio to work on something special that he’d been noodling on for a while: Disintegration, a FPS/RTS hybrid he likes to describe as an ATS – Aerial Tactical Shooter.

So what makes Disintegration an ATS? It’s the yin and the yang of two types of games, and by finding the balance between destroying your opposition from your Gravcycle and strategically commanding your crew on the ground to take objectives, disrupt enemies, and hold chokepoints, you’ll find yourself in a winning rhythm. We like to think of it as your left hand and right hand working closely together in a perfect balance: play the game too much like your standard FPS, or too much like a RTS, and it’ll be tough to find yourself on the winning team. But blend those two together, and you’re going to be chalking up W’s left and right.

Disintegration has a full-fledged single-player campaign, but this weekend we want you to come join our community in multiplayer to check out our three game modes for some 5v5 action. Play as one of nine crews, and pick your favorite based on your playstyle. Each crew is led by a robotic pilot – your character – plus a squad of ground units each with their own special abilities. Whereas the campaign is more serious in tone, we had a lot of fun with these multiplayer crews, which we think of as the motorcycle gangs of the future. Play as a ranged sniper/healer with Tech Noir, mix it up with honing rockets as Lost Ronin, or stick your enemies with a nuke as Warhedz. Or try out one of the other six Crews and find out which one you like best!

Our three multiplayer modes are Zone Control, Collector, and Retrieval. In Zone Control, command your crew to capture and hold three areas across the map to accumulate points and reach the score limit before your opponents. Collector is our deathmatch mode, where you’ll squad up with your team to take down opposing pilots and their crews. But you can’t just rack up kills, you’ll need to scoop up your defeated enemy’s brain cans to lock in those points. And don’t miss Retrieval, our delivery objective game mode. One team goes on the offensive, commanding your crew to pick up a nuclear core and escort it to a launch site. The other team plays defense, teaming up to prevent the opposition from scoring. Each team can score up to three times on offense, and the winner grabs the W.

We’re really looking forward to welcoming new players into the game this weekend. The dev team will be online as well, hanging out and playing alongside the community. We’re active on Discord, so come join our community and say hello there! We hope you have as much fun as we do playing the game, and decide to pick it up and hang with us beyond the free weekend. 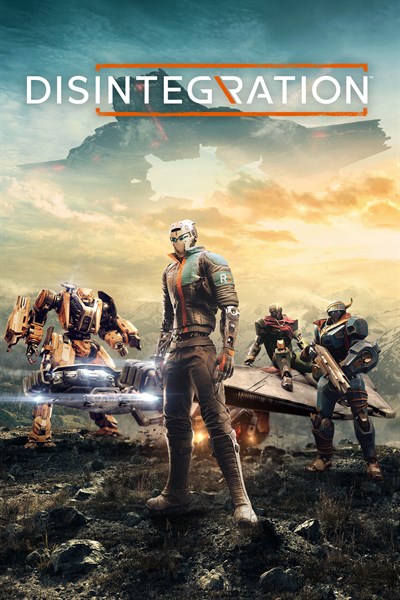 ☆☆☆☆☆ 191
★★★★★
$29.99 $14.99
Get it now
Xbox One X Enhanced
From V1 Interactive, the new 30-person independent development studio founded by Marcus Lehto, the co-creator of Halo, comes Disintegration, a sci-fi first-person shooter combining FPS and real time strategy elements. Set in the near future on Earth, the only hope for human survival is through Integration, a process developed to preserve human brains in robotic armatures. You play as Romer Shoal, a former Gravcycle pilot in command of a small resistance force still grasping onto the fading memories of their human selves. With the domineering Rayonne forces set on eliminating the final remnants of human society, it’s up to Romer and his crew of Outlaws to fight back and reboot humanity. Pilot weaponized Gravcycles and command your crew on the ground by leveraging a variety of unique abilities to dominate the battle. Key Features: • Tactical Gravcycle combat: Pilot a heavily armed Gravcycle featuring a variety of firepower, maneuverability, and abilities. Also command your crew on the ground, directing them to attack targets, pick up items, and use their unique abilities to turn the tide in battle. • Riveting single-player campaign: From Marcus Lehto, the co-creator of Halo and creative director of Halo: Reach, comes an all-new sci-fi saga. Play as Romer Shoal and confront the Rayonne, a rising global army set on eliminating what remains of humanity.